Over the years, Nigeria has been suffering from insufficient energy production despite being among the countries that have the largest economy in sub-Saharan Africa. The current consumption patterns across the nations of the world indicate that Nigeria is one of the countries that have the lowest rates of consumption despite the abundant, sustainable energy resources. Nigeria is naturally endowed both in conventional energy resources (i.e., oil, natural gas, lignite, and coal) and renewable energy sources (i.e., wood, solar, hydropower, and wind).

Don't use plagiarized sources. Get your custom essay on
“ Over the years Nigeria has been suffering from insufficient energy production despite ”
Get custom paper
NEW! smart matching with writer

Currently, in Nigeria, electricity is being generated through the combination of both thermal and hydro systems. All the power, distribution, and substations are specially interlinked by a transmission network popularly known as the national grid. According to Oyedepo (2012), the entire electricity generated nationwide is pooled into the National Control Centre, Osogbo, from where power is distributed to all parts of Nigeria. According to USAID (2019), the national electricity grid presently consists of 22 generating stations (3 hydro and 19 thermal) with a total installed capacity of about 12,522 megawatts as shown in Table 1 below.

In 2015, power supply in Nigeria averaged 3.1 GW, which was estimated to be only a third of the country’s minimum demand, with many consumers who are now depending on privately owned generators. Table II below shows energy consumption in 2014 by various sectors in Nigeria. The table indicates that the residential sector is the largest consumer of energy in Nigeria which is up to 50%. This is followed by commercial and public services and the least energy consuming sector is industrial sector while data is not available for the transport sector.Table II: Energy Consumption by Sectors Economic Sector GWhIndustry 4,057Transport -Residential 14,003Commercial and Public Services 6,379Final Electricity Consumption 24,439Losses 4,895Source: Authors’ computation based on data from the International Energy AgencyThe electricity sector is mainly base on natural gas thermal power plants. Approximately 85% of the grid-connected power plants are fossil fuel (gas) fired, while the remaining15% is hydroelectric power plants. Figure 1 shows the percentage contribution of the two sources of energy (hydro and gas) to total energy generation in Nigeria between 1980 to 2015. In 1980, the contribution of gas power was above 40%, while the contribution from hydroelectric power was below 40%. Again, between 1981 to 1983, while the contribution from gas power increased to over 60%, within the same period, the contribution of hydroelectric power dipped below 30%. In contrast, over a decade, i.e. from 1984 to 1996, the curve representing the gas power contribution drifted downward, showing a reduction in the percentage of energy generation from the source, but the contribution from hydroelectric power improved. There has been relative growth in energy generation from gas power in Nigeria begining from 1997 to 2015, while hydroelectric depletes creating a wide gap between the two sources. The improvement recorded in gas power can be link to various policies implemented, resulting in building more gas plants in Nigeria between the year 2000 and 2015. Figure 1. Electricity Generation in NigeriaSources: Author’s computation based on the World Development Indicator, 2017In 1980, value for electric power consumption (kWh per capita) in Nigeria was 68.02 and increased to 100.83 in 1993. However, in 2005, the total electricity consumption (kWh per capita) had risen to 129.26. Over the study period, total electricity consumption reached a maximum value of 156.73 in 2012 and a minimum value of 50.87. On the generation side, the value of electricity production was 61.18 in 1980 and decreased to 58.14 in 1991. By the end of 2005, the achieved total electricity generation was 67, and it was 82.41 in 2014. The maximum value of electricity generation stood at 82.41 in 2014 and attained a minimum value of 58.14 in 1991 during the study period. Figure 2 offers a graph depicting the association between energy production and consumption in Nigeria between 1980 and 2014. Initially, between 1980 to1982, the graph reveals that more energy was generated than what the economy demanded as consumption. The period coincided with the period when the population of Nigeria had not exploded. However, from 1983 to 1996, there existed a gap between energy production and consumption with energy consumption curve conspicuously above energy production curve. Furthermore, between 1997 and 2002, the gap between the two curves relatively close compared to previous development. Again, from 2003 to 2014, although there is a relative improvement in energy production, yet the curve representing energy consumption continues to drift upward, denoting that energy consumption has been short of its production. Figure 2: Electricity Production and Consumption in NigeriaSources: Author’s computation based on the World Development Indicator, 2017Two-way scatter graphs with linear and logarithm fits are used to show the general trends and patterns to specify and determine the relationship that exists between economic growth and the two major sources of electricity generation in Nigeria. This aim at drawing correlations and conclusions which may be indicative of the findings in the econometric analysis in the study. Figure 3 presents the interrelationship between economic growth and gas power while figure 4 provides the interrelationship between economic growth and hydropower. From Figure 3, the linear trend line indicates a positive trend between economic growth and gas power during the study period. This implies that the period when economic growth is at the highest level is matching with the period when gas power is at the highest level. Figure 3: Economic Growth and Electricity production from Gas in Nigeria Sources: Author’s computation based on World Development Indicator, 2017.In contrast to the positive trend observed in figure 3, figure 4 indicates a negative trend between economic growth and hydropower as the period of relatively high economic growth is connected with the period of low hydropower. Figure 4: Economic Growth and Electricity production from Hydro in Nigeria Sources: Author’s computation based on World Development Indicator, 2017.

Over the years Nigeria has been suffering from insufficient energy production despite. (2019, Aug 20). Retrieved from https://studymoose.com/over-the-years-nigeria-has-been-suffering-from-insufficient-energy-production-despite-essay 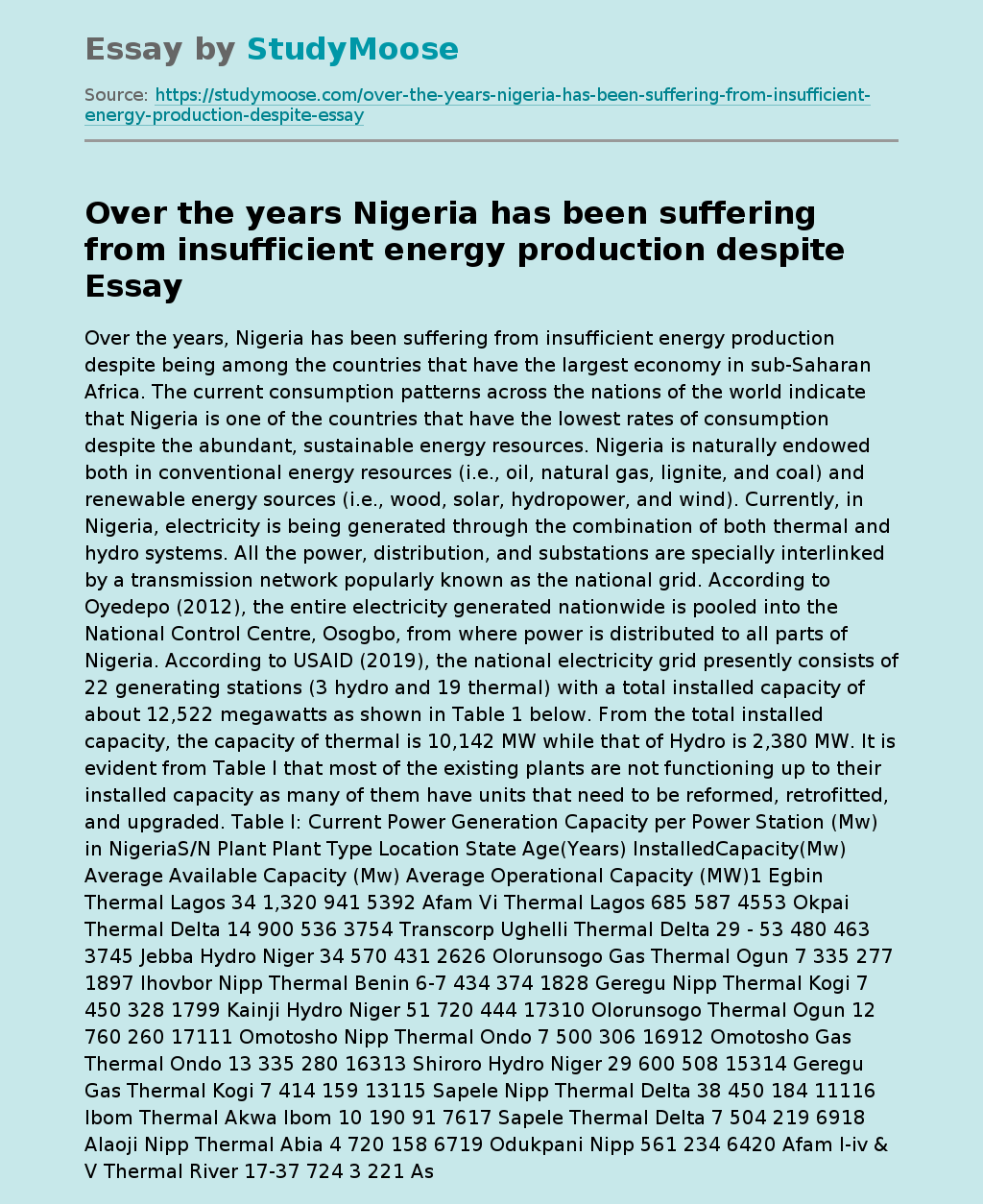