Don't use plagiarized sources. Get your custom essay on
“ Othello’s Tragic Flaws ”
Get custom paper
NEW! smart matching with writer

Iago’s ambition, Desdemona’s love for Othello, and Emilia’s loyalty in Iago and Desdemona are also tragic flaws. These tragic flaws are imperative to the play, and without them there would be a lack of plot, conflict, and climax. Othello’s tragic flaw of inherent trust haunts him throughout the play. Othello is easily persuaded and this leads him to put his trust in the wrong people.

He unfortunately gets ensnared into Iago’s devious plan. Othello treats Iago as a trust-worthy friend who he has known for a long period of time. When Iago realizes that Othello believes the story about Cassio’s relationship with Desdemona, Iago decides to take the scheme further. Iago places horrid images in Othello’s mind that turn Othello into a rash man. Othello’s tragic flaw ultimately leads to his destruction. Othello’s personality vastly transforms due to the madness. Othello ironically mistrusts his loyal wife Desdemona and good friend Cassio.

When Othello places Desdemona on her deathbed, he states, “Be thus when thou are dead, and I will kill thee/And love thee after” (V.ii.20-21). At this moment in the play, Othello’s actions are ironic. Originally, Othello worried that Desdemona would stab him in the back, but he is the one who betrays his beloved wife. Othello is brought to this action because Iago places extreme jealousy within him. Emilia enters Othello’s room and discovers that she has walked into another murder. Othello still has a degree of trust in “honest” Iago, but Emilia informs Othello of her husband’s lies. Othello may subconsciously realize the mistakes he has made, but he does not want to believe Emilia and face the truth. In response to Emilia, Othello states, “I say thy husband. Dost understand the word? My friend, thy husband;
honest, honest, Iago” (V.ii.188-189). Although Iago’s plan is obvious to the audience, Othello refuses to believe it. Iago’s actions have already destroyed Othello’s marriage, but Iago continues until Othello ruins his entire life.

Iago is a dishonest and devious character, but his main tragic flaw is his undying ambition to take down Othello and Cassio. In the play, Iago manipulates several characters and tends to extend his actions too far. Iago constantly manipulates his wife Emilia and treats her as his pet. He continuously disrespects her and uses her to advance his plans. However, Emilia has a growing sense of suspicion towards her evil husband as the play carries on. When Iago is planning to overthrow Cassio with the handkerchief, he states, “A good wench! Give it to me” (III.iii.359). Emilia finds this very suspicious. She wonders why this handkerchief is so vital to Iago as it belonged to Desdemona. At this moment, Emilia realizes something is brewing and notices that this is the time to act upon her disrespectful husband. Emilia knows how devious Iago can be, and how important it would be to earn a stronger position. She knows Iago will do anything to get his hands on the lieutenancy by taking it from Cassio. For instance, Iago is jealous of Othello’s power and is determined to steal his throne as well as his wife. When Iago learns that Othello is very trusting, he becomes very eager to take advantage of this overthrow Othello at a rapid pace. However, instead of being patient, Iago includes Cassio, Emilia, and Roderigo in his agenda to gain power. Involving several people in his plan backfires and interferes with his plan because all his actions eventually catch up to him. For example, Emilia becomes very suspicious of her husband’s desperation to possess the handkerchief. Emilia dislikes the way her husband treats her and becomes very anxious to catch him doing something devious. By the end of the play Emilia says, “You told a lie, an odious, damned lie! Upon my soul, a lie, a wicked lie” (V.ii.216-217). Emilia finally confronts her two-faced husband. Due to Iago’s extreme desire for power, his reckless actions eventually catch up to him. His wife turns on him and tells people about his recent actions. Iago is finally held responsible for his actions and taken away for a long period of torture.

Throughout the story, Desdemona relies heavily on Othello and his love for her. She believes that she and Othello have an everlasting relationship. Unfortunately, she is clueless about Othello’s trust in Iago. She does not know that he is feeding Othello appalling lies about her and Michael Cassio. Although Othello is the love of Desdemona’s life, his tragic flaw causes him to become extremely jealous. In the beginning of the play, Othello and Desdemona openly display their love for each other for others to see. Iago knows that in order to disrupt their passionate love, he is going to have to convince one of them that the other is cheating on them. Iago chooses to convince Othello of Desdemona’s “affair” with Cassio, and Othello does not hesitate to trust Iago’s statements and immediately believe that Desdemona is cheating on him. Othello knows that she betrayed her own father, Brabantio, and therefore conceives that Desdemona could potentially to the same to him. Othello starts acting as a demon is inside of him, but Desdemona does not understand the reason. As Othello’s jealousy starts to build up, Desdemona states, “Why ten tomorrow night, (or) Tuesday morn, on Tuesday noon or night’ on Wednesday morn” (III.iii.68-69). Othello shows obvious anger about Cassio to Desdemona. Instead of attempting to fix the situation, Desdemona hopes this side of Othello will pass. This is the key factor in the start of Othello’s envy towards Cassio due to Iago’s fatal lies. Desdemona continues to believe that nothing stands a chance of interfering with her and Othello’s relationship. Meanwhile, Othello fails to look at Desdemona the same way believing that she has been seeing Cassio behind his back. As the play progresses, Othello’s jealousy is getting increasingly worse and Desdemona does not act in response to Othello’s harsh behavior. As Desdemona lays hopelessly in her deathbed, she does not panic, however, she acts as if Othello is not going to kill her. As Othello smothers Desdemona, she eventually states to Emilia, “Nobody. I myself. Farewell. Commend me to my kind lord. O, farewell” (V.152-153). Desdemona expresses her undying love for Othello by explaining to Emilia that she took her own life away. She cannot believe that Othello would kill her because her love blinds her. Therefore, love is Desdemona’s tragic flaw.

Emilia contains the tragic flaw of loyalty. She exhibits this loyalty particularly to her husband and to Desdemona. Although Emilia receives
disrespect from her husband, she perpetually shows Iago loyalty throughout most of the play. When Emilia picks up the handkerchief that Desdemona drops, she hesitates to give it to Iago. However, she does give it to Iago because there is some loyalty that exists in her towards her husband. As Iago demands the handkerchief from Emilia, she questioningly states, “What will you do with ‘t, that you have been so earnest to have me filch it?” (III.iii.360-362). Emilia knows her husband is up to something and it is up to her to stop it. Although for most of the story Emilia is loyal to Iago, she also has loyalty to Desdemona. Emilia discovers that Iago uses the handkerchief to frame Cassio and destroy the relationship between Othello and Desdemona. When Emilia walks into the murder of Desdemona, she knows she has missed her opportunity to catch her husband in the act framing Desdemona. Her minimal amount of remaining respect for her husband is eliminated at this moment, and she tells everyone that it is Iago that has stolen the handkerchief in order to blame Desdemona. Emilia’s secret strength is evident. Emilia states, “O thou dull Moor, that handkerchief tho speak’st of I found by fortune, and did give my husband—For often, with a solemn earnestness (More than indeed belonged to such a trifle), He begged of me to steal’t” (V.ii.267-272). Emilia explains to Othello that he has fallen into Iago’s trap. Emilia tells everyone in the room that Iago asked for the handkerchief, and shows her loyalty to Dedemona by proving her innocence. When Emilia displays her loyalty towards Desdemona this way, it angers Iago thoroughly and ruptures his plan completely. In response to Emilia’s actions, Iago takes out his rapier and stabs her. She dies on the same bed as Desdemona. The two innocent female lives are lost in the same spot. Overall, the tragic flaw of loyalty that Emilia expresses is her downfall.

Tragic flaws are a critical component of Shakespeare’s Othello. Each character displays a tragic flaw as the play unravels. The play would have no action without these tragic character flaws. Shakespeare provides these flaws to the characters to create dimension and suspense. Othello, Iago, Desdemona, and Emilia would be unrealistic, boring, and static characters without these flaws. The tragic flaw leads a character to downfall, and it is an integral part of a tragedy. 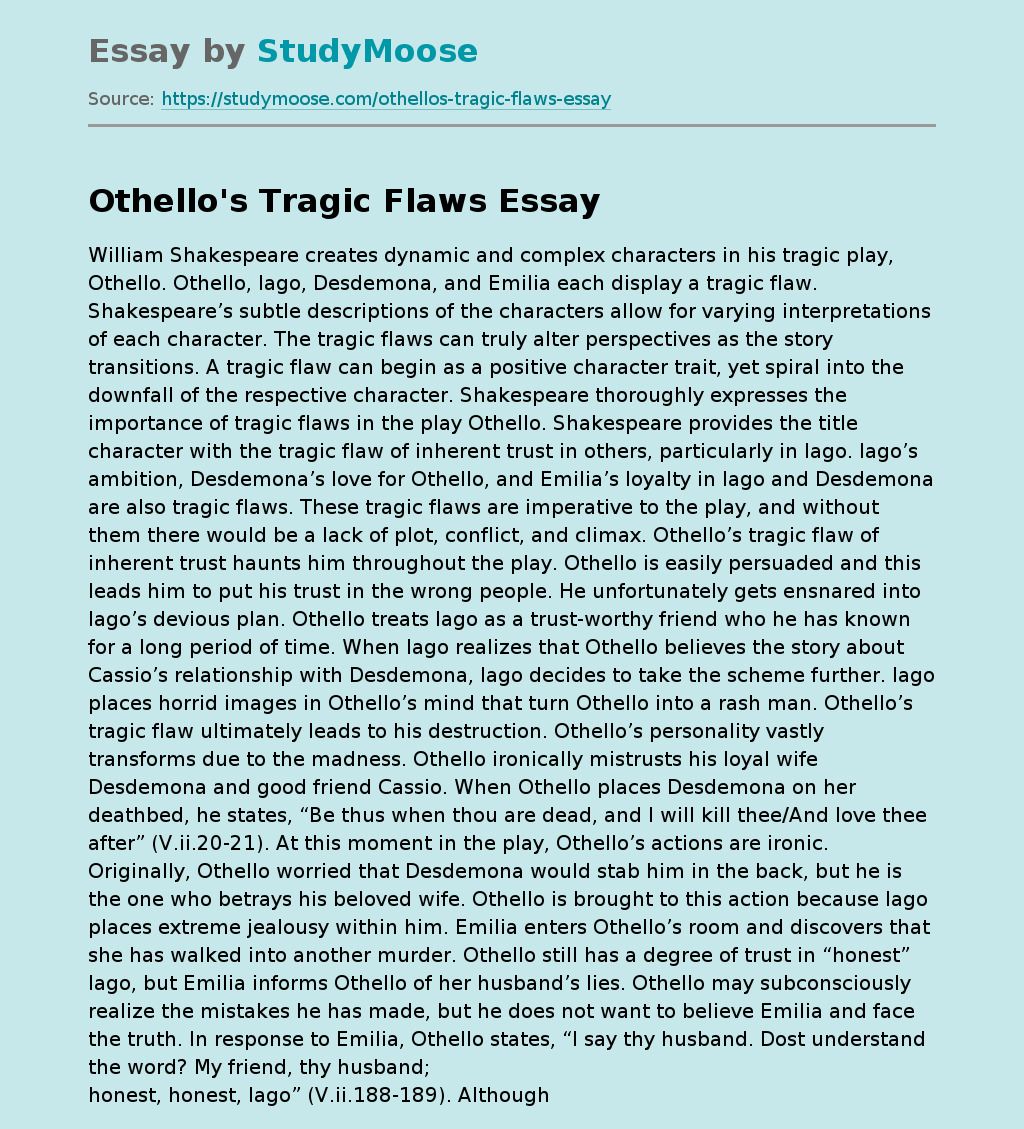