Explore Shakespeare's Use of Soliloquy in 'Othello'

Elizabethan and Jacobean dramatists used his theatrical convention to evoke the inwardness of their characters, a soliloquy provides the audience with accurate access to the character’s innermost thoughts and we learn more about a character than could ever be gathered from the action of the play alone. In ‘Othello’, both the hero and the villain speak in soliloquy. Iago, the villain, speaks his soliloquies first (Othello’s occur towards the end of the play), drawing the audience in as he outlines his intentions and ideas.

Don't use plagiarized sources. Get your custom essay on
“ Explore Shakespeare’s Use of Soliloquy in ‘Othello’ ”
Get custom paper
NEW! smart matching with writer

The soliloquies give us access to the feelings and motivations of both hero and villain, which heightens the intensity of the drama. They are also a source of a great deal of dramatic irony which increases the dramatic tension for the audience. In ‘Othello’, the use of soliloquies is crucial as the play is based on deceit and they allow us to know the motive of characters, especially Iago, and we see the characters in their true light as they use language and images which are typical of them.

Iago illustrates the issue of deception through his soliloquies; they are useful as they show Iago’s true feelings. Iago’s character is presented to us through his soliloquies, illustrating motives which he uses to justify his actions, making the soliloquies instruments to show the audience what makes Iago tick. Language is the source of Iago’s power and his soliloquies reinforce this. Iago’s soliloquy in Act1 Sc.3 is where he starts to formulate his plan to get back at Othello.

When he is alone, he reveals his true motives. First he mocks Roderigo – “Thus do I ever make my fool my purse:” making the audience aware of the fact that he is only using Roderigo. He is toying with Roderigo for ‘my own sport and profit’. He suspects Othello of cuckolding him and he wants revenge. Iago knows that Othello trusts him well, and the fact that he says that he will use this against him shows just how devious Iago is –

The better shall my purpose work on him.”

Othello holds Iago in very high regard and it is Iago’s use of this that leads Othello to murder his wife. Iago is determined to drive out Cassio and take his place, he considers how he could do this and decides to use Othello’s trusting nature to try to persuade him that Cassio is too friendly with Desdemona. Iago’s soliloquy suggest that the manipulation of Roderigo and Othello in the first act is leading up to a more serious deception as his web will ensnare Desdemona and Cassio too. The soliloquy shows his ability to improvise quickly, at the start, he is musing over a possible plan, and a few lines later he has the outline of a subtle plan which will bring about his revenge. It is appropriate that Iago uses words which associate him with a devilish image –

Must bring this monstrous birth to the world’s light.”

Without the soliloquy, the audience would not know of Iago’s plan, or the extent to which he is capable of manipulating people. The soliloquy clearly shows Iago’s evil nature and his use of devilish imagery reinforces this.

Another of Iago’s soliloquies in Act2 Sc.3 is also useful in showing us Shakespeare’s use of soliloquies. At the beginning of the speech, Iago reflects on how no one can accuse him of being the villain when he offers such good, helpful advice. We can see that he manipulates a lot of the characters and knows that he is acting. We see Iago’s true maliciousness in this speech as he intends to use Desdemona’s good nature to “enmesh them all”; he wants to destroy an innocent with whom he has no quarrel so that he can carry out his revenge. The speech shows Iago’s delight in his own cunning and acting abilities, revelling in the fact that he has the power to turn Desdemona’s “virtue into pitch”. As is typical throughout the play, Iago shows that he has nothing but contempt for honesty and innocence and he looks forward to corrupting them, associating honesty with foolishness. Iago’s loyalty is only to himself, and he even plans to use his wife in his scheme.

The imagery Iago uses is again crude and materialistic, he will persuade Othello that Desdemona pleads for Cassio for her “body’s lust”, and without her knowing it, her conviction in Cassio and her pleas for him to be forgiven by Othello only serve to “undo her credit with the Moor”. Iago’s language in his soliloquies emphasises his deception, as with Othello and Cassio, he is generally polite and guarded. The soliloquy serves to provide the audience with another view into his evil mind that he cannot express in dialogue with other characters as he is trying to manipulate them and needs them to think of him as honest and trustworthy.

Othello’s language is a contrast to Iago’s, he is seen as the most romantic of Shakespeare’s heroes, his speeches often emphasise this difference as he uses poetic lines and images. However, this language sees a significant change as Iago poisons Othello’s mind, and his speeches soon take on similar traits of Iago, using devilish language and hellish imagery. Although Othello’s soliloquy in Act5 Sc.1 shows a change from the chaotic mind he showed in Scene 4; his anger has passed to an infinite sorrow, and he speaks more like the Othello we saw at the beginning of the play. Othello’s speech reveals a number of things about Othello that we would not otherwise know. Othello sees himself as acting as a martyr and for justice as he suggests that his purpose is to prevent Desdemona from committing further sins of adultery. His repetition of “It is the cause”, plus the fact that he will not say what the cause actually is, implies that Othello finds it hard to take Desdemona’s life and be separated from her. Othello does not want to spill Desdemona’s blood; some critics suggest that this is because he wants to avoid leaving any marks of murder so he can feel blameless. Other critics see it as Othello’s desire to leave Desdemona looking perfect –

“Yet I’ll not shed her blood,

Nor scar that whiter skin of hers than snow,

And smooth as monumental alabaster:”

It is as if Othello wants to see Desdemona as she does usually, with no marks of murder on here. Throughout the rest of the speech, Othello uses complex imagery; he speaks of a rose being plucked and then withering, he then says –

“Be thus when thou art dead and I will kill thee,

And love thee after.”

This suggests determination, but also pain and reluctance, Othello has to use symbols, Desdemona as a rose, by doing this, he avoids confronting the deed directly and distances himself from Desdemona as a person so that be might be more able to carry out the murder. The opposition (the play is heavily based on opposites and opposition) in Othello is clearly shown in his lines about weeping and sorrow –

“But they are cruel tears: this sorrow’s heavenly –

It strikes where it doth love.”

Othello implies that sorrow is “heavenly”, which is the opposite to what sorrow should be, this emphasises that Othello is acting out of love, as a martyr of love.

Without the soliloquy, the audience might not have been able to know what Othello was thinking as he justifies his action in killing Desdemona. It portrays Othello as his usual calm self while he does not speak passionately and seems in control of what he is saying, the images and language he uses are opposed and shows that he is emotionally torn.

From this, we can see that Shakespeare uses soliloquies to put forward what the dialogue between characters cannot; we see the characters true emotions and motives when they speak in soliloquy and this is implied when they use language and imagery which is typical to them. Iago’s soliloquies show his true nature, he highlights what his scheming has accomplished and indicates his future plans and actions. The audience has a chance to view his characters and what he thinks of the other players. Othello’s soliloquies come later on in the play when we can see the changes in Othello as he is poisoned by Iago. They serve to portray Othello’s nature to us and emphasise the beauty of his language.

Explore Shakespeare's Use of Soliloquy in 'Othello'. (2016, Jul 02). Retrieved from http://studymoose.com/explore-shakespeares-use-of-soliloquy-in-othello-essay 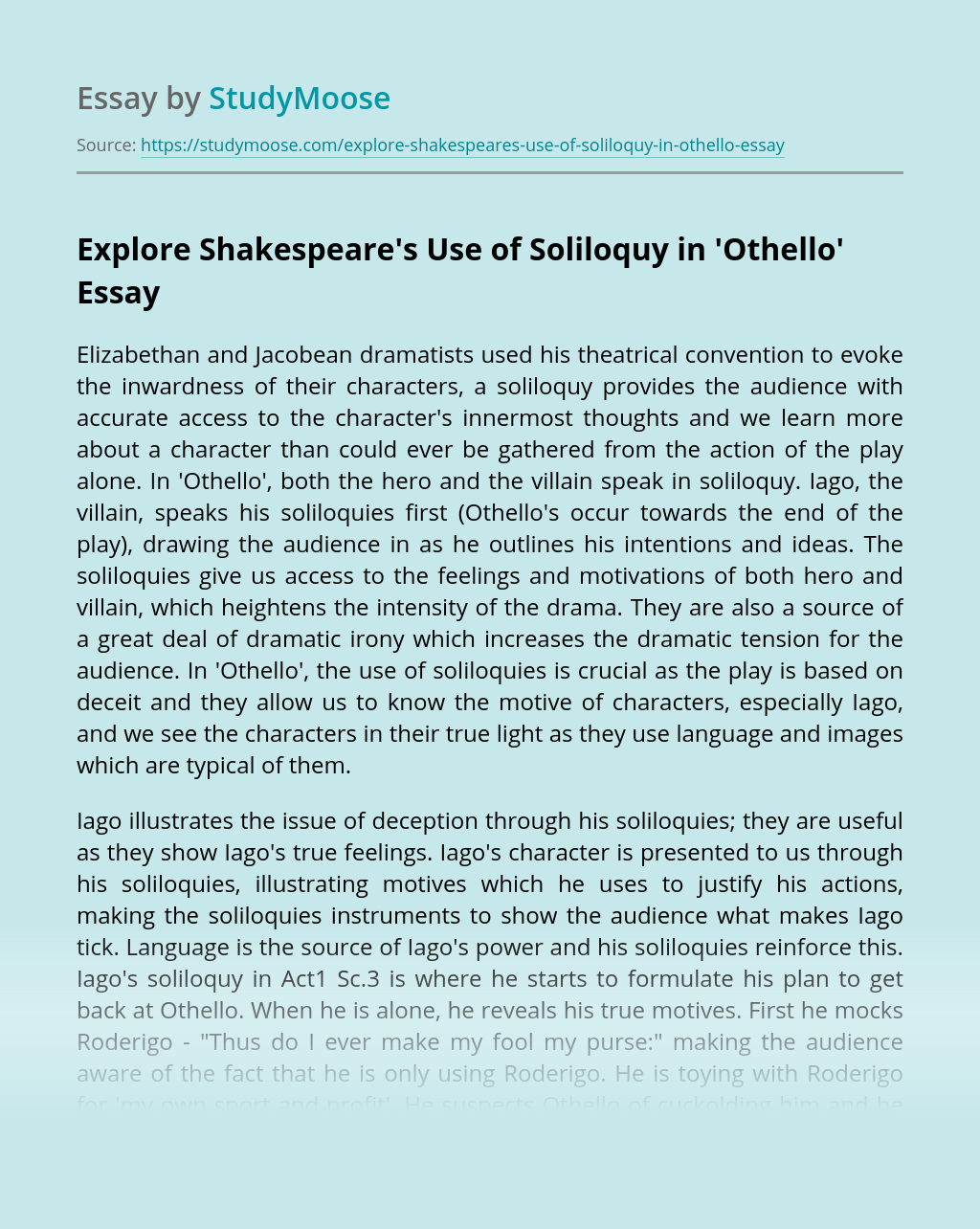