Shakespeare’s The Tragedy of Hamlet, Prince of Denmark is a story of a man searching for his true identity.

Don't use plagiarized sources. Get your custom essay on
“ Hamlet’s Growth Through Soliloquies ”
Get custom paper
NEW! smart matching with writer

Shakespeare uses soliloquies to show the readers and audience the true feelings and emotions of Hamlet. All seven soliloquies, each slightly different, proclaim Hamlet’s inner conflicts and reasons for delaying his revenge. Hamlet is a very complex character. He doesn’t really know who he is, but through his soliloquies we can trace Hamlet’s search for his true identity.

In Hamlet’s opening soliloquy he reveals how he feels towards Claudius and his mother. He is disgusted with the circumstances of their marriage. “With such dexterity to incestuous sheets”, he proclaims in rage. He does not understand why his mother married Claudius in such haste, causing such internal torment for himself. While Hamlet hates Claudius, he loved his father very much, and his death has caused him much sorrow. In the beginning lines of this soliloquy Hamlet has already considered suicide, but he decides to do nothing.

His decision not to act starts a trend of procrastination, and these decisions of inactivity will continue to be the main source of his problems throughout his speeches and the play.

After talking with his father’s ghost, in the third soliloquy Hamlet is angered by the news that Claudius has murdered his father. Hamlet assures himself that he will think of nothing but revenge. However, he delays his plans, because he is uncertain of the King’s guilt. He finally takes some action when he plans to put on a play that will mirror his father’s murder in order to see the King’s reaction.

At the end of the third soliloquy he says, “The play’s the thing wherein I’ll catch the consicience of the king.” Even after the Murder of Gonzago is performed, he takes no action.

He begins to feel guilty and is ashamed that he has not avenged his father’s death despite being quite sure of Claudius’s guilt. In the fourth soliloquy Hamlet begins to show signs of madness. He again contemplates suicide, and again he takes no action, this time because he is unsure of what occurs after death. Hamlet was very upset with his mother, but he shows that he is not inclined to harm when he says, “speak daggers to her, but use none”. All these soliloquies show Hamlet as a very passive character who would rather think and talk than fight or kill.

In his seventh soliloquy, Hamlet finally gains the courage to avenge his father. It occurs just after a meeting with Fortinbra’s soldiers where he finds out they are going to fight over a worthless peice of land. He feels ashamed that he put off avenging his father’s death for so long. With his newfound determination to he vows, “O, from this time forth, my thoughts be bloody, or be nothing worth”.

Through Hamlet’s soliloquies we are able to understand his true self, not the false facade he portrays to all that know him. We are able to trace his thoughts and emotions from his first passive act up until he finally avenges his father. Hamlet’s tragic flaw is his inability to act which ultimately leads to the deaths of many characters and lastly himself. Without soliloquies many of Hamlet’s actions, and reasons for not acting, would make very little sense. They help show Hamlet’s true feelings and emotions that would otherwise be hidden. 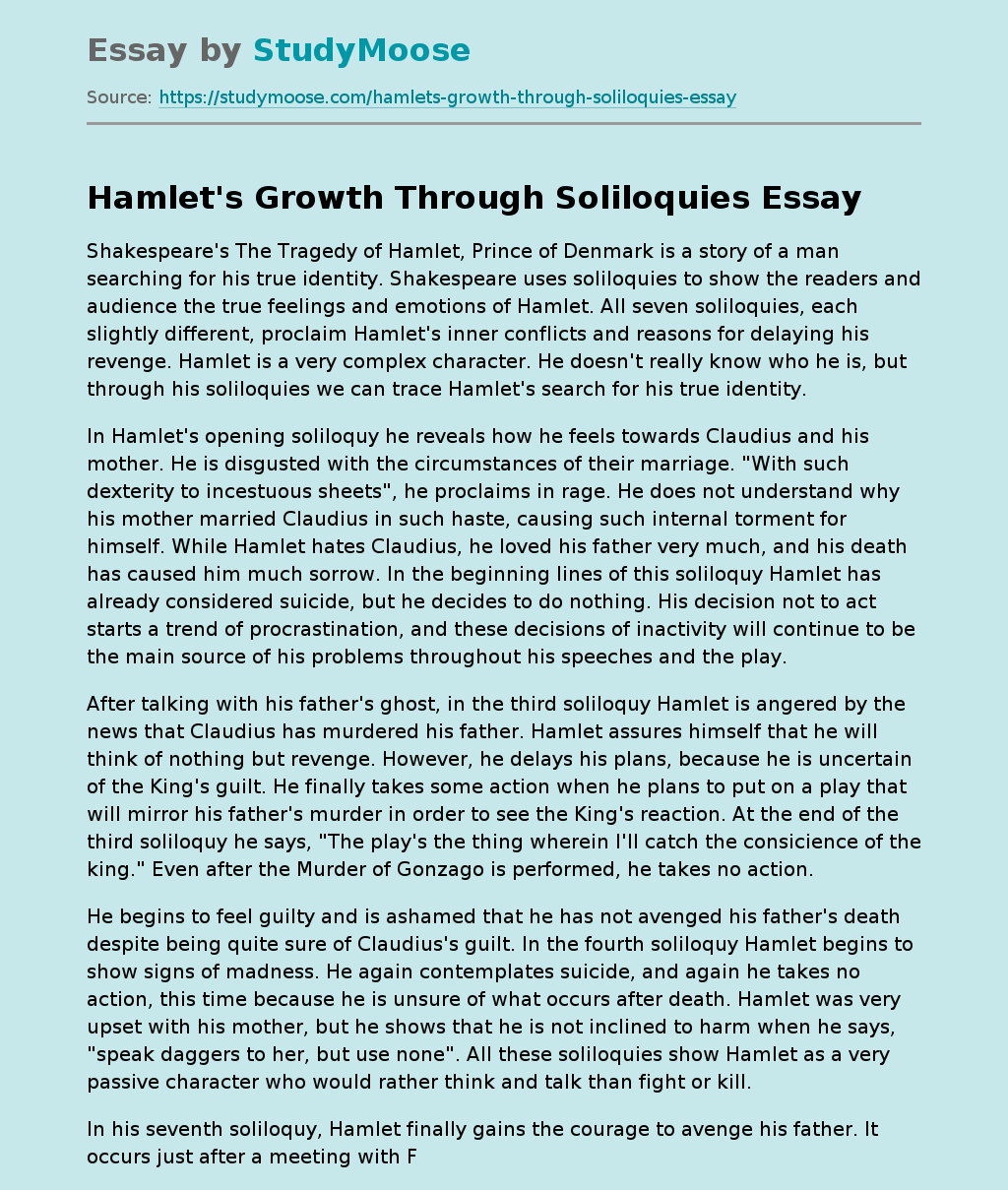