Of Water and the Spirit by Malidoma Patrice Somé

With Of Water and Spirit Malidoma Patrice Some has written a very interesting, engaging autobiography in which he details his life as a man living between two different lifestyles: the traditional life of his people, the Dagara, who live in rural Burkina Faso, the former French Colony known as the Upper Volta, and the life of a highly educated African man with two PhDs who travels throughout the western nations writing, lecturing, and teaching about his people and their relationship between the normal world and the spirit world.

Don't use plagiarized sources. Get your custom essay on
“ Of Water and the Spirit by Malidoma Patrice Somé ”
Get custom paper
NEW! smart matching with writer

According to Some his first name “Malidoma” means “be friends with the stranger/enemy. ” The Dagara believe a person’s name has an affect on the his life so they name their children something that will always remind them of their mission in life. Some, then, is “here in the West to tell the world about my people any way I can, and to take back to my people the knowledge I gain about this world” (Some 1994, 1).

Some was named Patrice when he was baptized by Jesuit priests at the insistence of his father who had converted to Catholicism.

The attitude of Some and the Dagara people is very interesting. Instead of feeling hatred against the white men who had colonized the country and basically enslaved the people while stealing their land and resources, the Dagara are concerned about all people, including the white people and are “convinced that the West is as endangered as the indigenous cultures it has decimated in the name of colonialism” (Some 1994, 1). They believe that western cultures abandonment of “functional spiritual values” has made the West sick with a “sickness of the soul” (Some 1994, 1).

Some was basically kidnapped from his tribe at the age of four when he was taken away to study at the Jesuit school. At the time the Jesuits were trying create a “native missionary force” to help in converting the people of Upper Volta. Prior to being kidnapped Some had spent much of his childhood with his grandfather, a great leader of the Dagara. His grandfather taught him many of the stories of the Dagara people, their spiritual beliefs, and their history.

Some’s grandfather emphasized the close spiritual relationship of the Dagara with the world, the land, and the spirits of their deceased ancestors. The Dagara believe there is an important connection between an individual, his people, his land, and his god. Some’s grandfather could not understand the Catholic Church’s attempts at missionary work throughout the world, “. . . let me tell you that a God who would send his people away from their land must be drinking a very strong wine all the time” (Some 1994, 29).

At the time of his death, Some’s grandfather told Some that the ancestors had designated Some to “follow the white man so that you may serve as the eye of the compound, the ear of your many brothers, and the mouth of your tribe” (Some 1994, 40). Some’s grandfather also told him that he came back to the tribe he would appear strange to the Dagara, he would only be part Dagara and would have to undergo the month long initiation in the wilderness to become a member of the tribe. Some’s time at the Jesuit school was unpleasant.

The priests often beat him while they were teaching him as if the beatings would reinforce the lessons and make him confirm to the Jesuit teachings. When he graduated to the seminary school at Nansi he had similar experiences and often found that he lived outside of himself. He would make his “thoughts go away from my body so that when the first blow fell, I [he] was not even aware of it” (Some 1994, 114). Some resented the way he was treated and found himself rebelling against the method of instruction.

This rebellion reached its climax when Some was twenty and became involved in a physical altercation with one of the priests. During the struggle the priest fell through the window and landed in the dirt outside. Consequently, Some ran away from the school to return to his home. His journey home took him eleven days since he was forced to walk the entire way. Ironically, on his journey, Some learned that the country had gained its independence from France in 1960 and such forced schooling had come to an end.

Since Some was about four-years-old both when independence occurred and when he was taken away from his people to attend school, he could have returned to his people long before (Some 1994, 153; 99-156). By the time he returned to his village, the Jesuit missionary priests on the hill were gone, although a day school still existed. Once Some was in his home compound, he found he no longer fit it with his people. He had forgotten how to speak the language; the village had changed with independence. His people were not comfortable with him there, nor was he comfortable with them.

Consequently the elders decided he should undergo the Baor, the month long initiation, “to quiet the white man in your soul . . . so that his “soul [would] come back home and . . . stop being a stranger to yourself and to us” (Some 1994, 178). Some describes his spiritual initiation in detail and tells how he was able to return to the Dagara. Once he had returned fully to the Dagara, Some found that he was again not comfortable living with his people because he had not yet completed his mission that his grandfather had told him about and that his ancestors had assigned him.

Once again it became necessary to leave his people so the he might “be friends with the stranger/enemy. ” This is what Some continues to do today through his writings and lecturing. However, he is careful to return to his home every year to make certain he reconnects with his home and people.

Some, Malidoma Patrice. Of Water and the Spirit: Ritual, Magic, and Initiation in the Life of an African Shaman. New York: G. P. Putnam’s Sons, A Jeremy P. Tarcher/Putnam Book, 1994.

Of Water and the Spirit by Malidoma Patrice Somé. (2017, Mar 09). Retrieved from https://studymoose.com/of-water-and-the-spirit-by-malidoma-patrice-some-essay 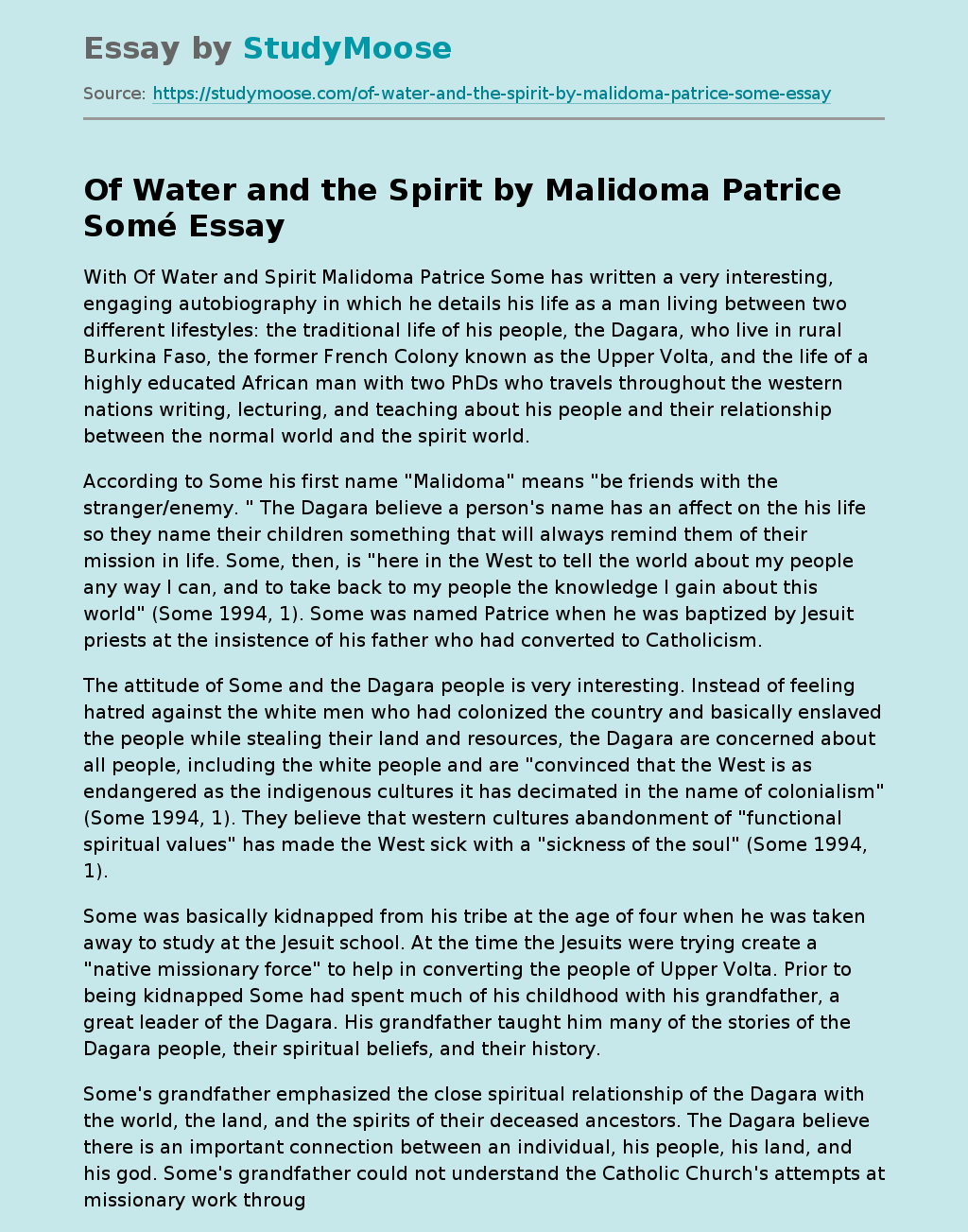