Critical Response on "One Flew Over The Cuckoo's Nest"

There have been many struggles in history between authority and those who oppose it. The most obvious and most common example is revolutions against governments. We live in a society where stability and assimilation are not just recommended, but also enforced. We have the right for civil disobedience, so long as it is non-violent and within reason. In the book, One Flew Over the Cuckoo’s Nest, R.P McMurphy, a “brawling, gambling man” enters a mental asylum in Oregon, and begins to wage war “on behalf of his fellow inmates”.

Don't use plagiarized sources. Get your custom essay on
“ Critical Response on “One Flew Over The Cuckoo’s Nest” ”
Get custom paper
NEW! smart matching with writer

However he finds himself at odds with Nurse Ratched, a strict, manipulative and methodical woman who runs the ward like a “precision-made machine”. The book follows McMurphy’s actions that constantly clash with the Nurse, and what she represents: authority. By the end of the book, there are many examples of struggles against the higher power, and it is in my opinion that the statement “when authority and individuals come into conflict, authority always wins out” is incorrect, because individuals do not have to win the physical conflict to win the battle of brains.

Proficient in: One Flew Over The Cuckoo'S Nest

From day one, the reader finds that McMurphy is out to cause trouble. Gambling is illegal in the ward, but McMurphy declares that he was sent to the institution “to bring [the inpatients] some fun an’ entertainment around the gaming table”(p. 16). He starts interrupting daily meetings, which the Nurse treats with much importance. And whenever he is reprimanded for something, he laughs. The laughing is the most important part of his self-defence, as it is the only legal way he can fight back against authority.

It is a symbol of defiance, and a sign of McMurphy’s freedom. It shows that, no matter what the institution does to him, he still has his mental independence.

As the reader progresses further on in the story, McMurphy makes a bet that he can “get [the Nurse’s] ‘goat'”. When he finds he has no ward-clothes (p. 79), he runs around in a towel, threatening to drop it at times, while the distressed Nurse tries, in vain, to make him get dressed. Then, the same morning, he takes bets on his accuracy about throwing butter at the clock (p. 85). McMurphy wants to watch the World Series, and takes a vote from all the saner patients. While all of them vote to watch it, the Nurse shuts the idea down, even when McMurphy gets the majority. When airing on television (p. 114), he stops work and proceeds to turn on the television, sit down, and watch the game.

When the rest of the men decide to stop work and join him, and the Nurse turns the power off, they continue to watch, just to show that her power and authority has nothing over them. This is an example of individuals fighting against authority. They might not be successful in the real world (having to wear clothes, not being able to watch the baseball game), but inside they’re freer than they’ve ever been before. Being downtrodden and strict by the Nurse forced them to become less

Things begin to grow bigger and more important as the story progresses. McMurphy realizes that his release is dependent on his good behavior, and tones down his obnoxious acts. However, he still finds that Nurse Ratched is going to keep him in the hospital for as long as she wants. He tries to be subdued, and in doing so, another rebellious inmate called Cheswick, who had tried very hard to be like McMurphy, kills himself, because he thinks that McMurphy has been defeated (p. 136).

Nurse Ratched sees the change in McMurphy, and to gain total control of the ward, she demands penance for the insubordination during the World Series. McMurphy smiles and nods, but destroys the glass that separates the nurses’ room from the ward, to show his true feelings (p. 155). He excuses himself, saying that the window was “so spick an’ span [that he] completely forgot it was there”. This shows how he is standing up to authority, and while he doesn’t change anything in the real world, it shows the inmates and himself that inside they are free.

Part III describes McMurphy’s fishing expedition. He takes the men on an excursion on a fishing boat, much against the Nurse’s wishes, but by tricking the doctor to come along, he succeeds. While there is not much about Nurse Ratched in that part, Chief Bromden, the narrator of the story, notices that the Combine is working on the outside too – with commuters and houses and children (p. 186). He had been in the ward for about 20 years, and a lot had probably passed since he was younger. However, this glimpse into society makes them realize that they (as patients) aren’t as monotonous as this, and they can be more free than they are already.

Within a week of the trip, Nurse Ratched is ready with her new plan. She tries to show McMurphy as a con man, stealing and wining money from all the patients. But she is shocked to discover that all the patients were happy to lose that money, as they enjoyed themselves, and weren’t using it for anything else anyway. After a few more instances of insurgence (McMurphy and Bromden’s fight with the staff {p. 215}; continuous interruptions to ward procedures {p. 229}), the final insurrection came: McMurphy’s party.

McMurphy organizes for two of his “friends” to come to the ward for a party that would also serve as his breakout. After a great night, everyone falls asleep, and in the morning, the day-staff came before anyone can wake up in time. After searching for Billy Bibbit, and finding him unashamed of his actions the previous night, the Nurse gives him a guilt trip, threatening to tell his mother, and then locking him in the ward’s doctor’s room. Billy commits suicide, and the Nurse tries to blame it on McMurphy’s lack of respect for authority.

Realising that any chances of surviving are ruined, and that his battle with authority is now at it’s final stage, McMurphy sacrifices himself (and consequently his mental-independence) by attacking Nurse Ratched, exposing her as a vulnerable woman, and destroying any sense of authority and control she had left over the patients. This is the final action between two desperate factions: the authority and the autonomy. The showdown ends with McMurphy being captured, but because the other patients see the nurse as a woman, and not as the dominant Nurse, she can never have the same control over them as she had previously had.

McMurphy is lobotomized, but before the ward can see him in his vegetable-like state, Chief Bromden smothers him with a pillow, and then breaks down a wall to freedom. The patients never get to see McMurphy as a vegetable, so their last memory of him alive is his attack on the Nurse. McMurphy is remembered as a symbol of resistance, and as a hero against the authority that had cowed the patients for so long.

I believe that McMurphy shows the reader that while the authority may be able to make you conform, you can still remain free inside, which is more important than anything else on earth. Because it is against national regulations to take away freedom, and as long as you have your sanity and your mental independence, nothing can beat you.

Critical Response on "One Flew Over The Cuckoo's Nest". (2016, Jul 01). Retrieved from https://studymoose.com/critical-response-on-one-flew-over-the-cuckoos-nest-essay 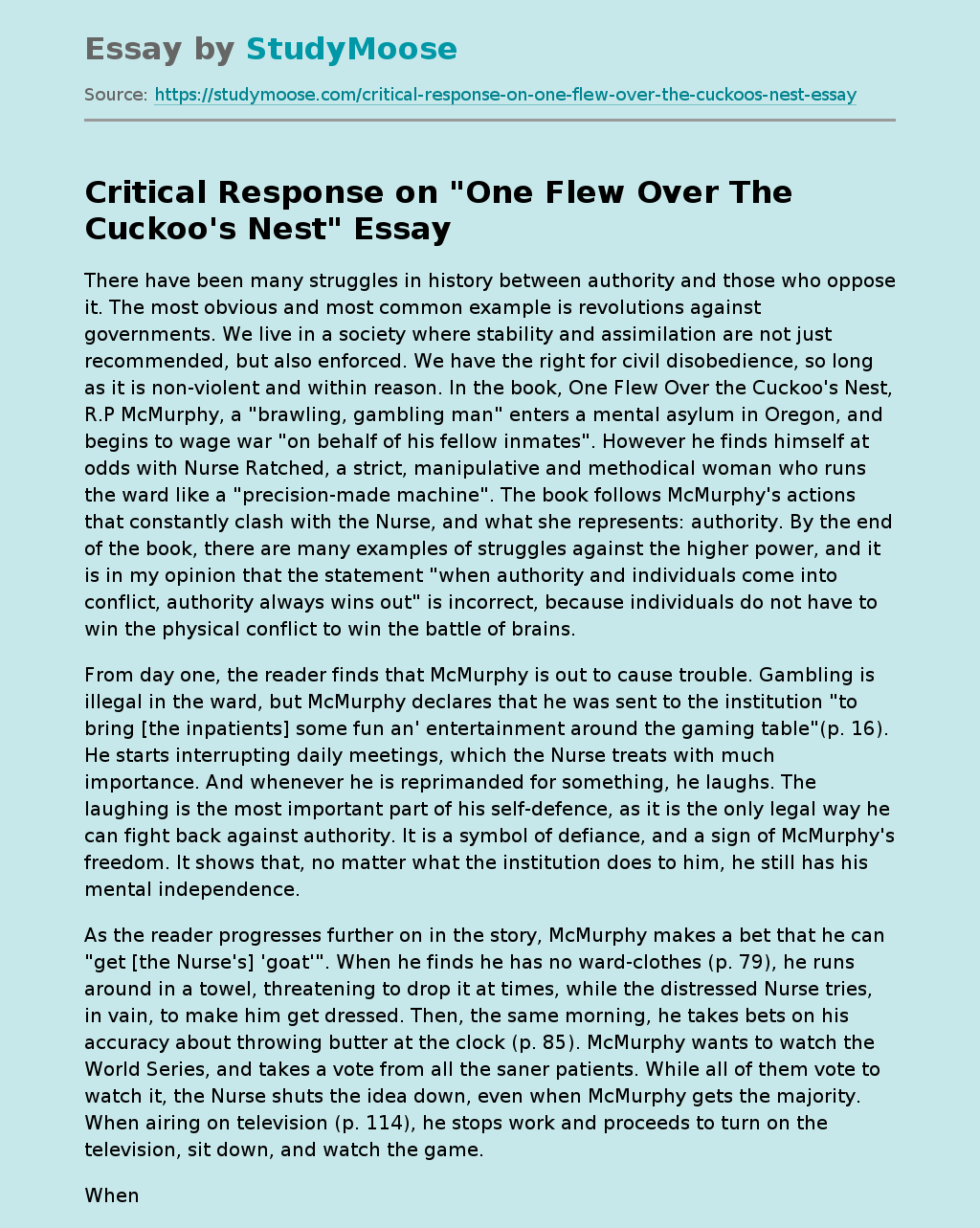