In the article, “Japanese Spirit, Western things” the author assumes a cause and effect relationship between the opening up of Japan to world trade and international relations by Commodore Perry of the United States Navy in 1853 and the development of Japan as a major economic power. The author thus pushes back the cause of what has been called the “miracle” of Japan from the post-Second World War era, when the US occupied Japan and set about to reconstruct the country as a liberal, pacifist democracy to a much earlier period.

The US sent Perry to compel Japan to open herself up to the world, to end two centuries or so of self-imposed isolation. Japan did have contact with Europeans, but had confined contact to a single port, Nagasaki. Perry, told to “obey the rules” refused to comply. Subsequently, according to the author, Japan decided that the best option, faced with what was in reality gunboat diplomacy, was to enthusiastic ally embrace Western technology and to grow strong as a result.

However, suggests the author, the Japanese may have outsmarted Perry and those who sent him because they have only ever accepted things Western on their own terms.

While huge tracts of the world were incorporated into colonial empire, Japan was one of a relatively few countries that remained outside any colonial empire. China, too, was never formally colonized. However, unlike Japan, China lost control of her economy to the Western powers. The author argues that although Japan has developed the world’s second largest economy, she has never fully played the game according to the rules.

The US and other trade-partners criticize Japan for protectionist policies.

These include supporting companies and banks that would fail without government intervention, as well as domestic policies that discourage competition in such areas as health care and education. The article mentions imbalance in trade as problematic, the fact that Japan exports more than she imports – selling cars to the rest of the world but importing very few. The author suggests that the US wanted to play Japan off against the competing imperial powers in China and was “furious” when Japan “turned to colonialism and tried to carve up China on its own.” The author twice refers to the absence of colonial ambition on the part of the USA, suggesting that colonialism “directly contradicted America’s reasons for sending Commodore Perry. ” Is this sustainable. Feifer (2006) suggests that the US after winning the Mexican Spanish-American War was embarking on a project to use her wealth and power to dominate the world and to shape the world so that her interests were served. Yet, according to Feifer, Perry was allegedly sent on a humanitarian mission to bring Japan into the family of nations but that his real intent was thoroughly imperialist.

He was convinced that the American way was the only way and that Americans had a special role to play in the world. Feifer sees parallels between the American claim to be “superior” and the attitudes of racial superiority and divine destiny that lay behind Japan’s entry into World War II. He even suggests that bombing Pearl Harbor was pay back for Commodore Perry’s entrance into Japanese history. Whether everyone will find the argument that Japan was copying the US when she launched her bid for a “co-prosperity zone” across Asia or not, this is an interesting thesis.

Ian Buruma on the other hand, according to the article, attributes the origin of Japan’s ideology of superiority to “German theories on racial purity. ” The article appears critical of Japan for, on the one hand, joining the club of international trade while on the other hand not quite obeying the rules. Yet the criticism of protectionist practices would equally apply to the USA and to the European Union, both of which subsidize agriculture. If propping up failing businesses breaks the rules, the USA is equally guilty after recent bailouts of failing financial institutions.

The author suggests that Japan’s failure to open up internal markets means that it has “limped along, growing far below its potential” yet even by “limping along” Japan’s economy is the second largest in the world. Not bad. Japan has successfully, to date, preserved many ancient customs. The article refers to Japan clinging “to distinct ways of speaking, interacting in the workplace, and showing each other respect, all of which have helped people to maintain harmony in many aspects of everyday life” and almost implies that this represents a hindrance to growth.

Perhaps the Japanese do not value profit above people, so companies with long and distinguished histories that play important social as well as economical roles may be worth saving. The real weakness of the article is that it use the expression “Japanese spirit, Western things” as a catchy phrase but fails to explore the deeper meaning of what the spirit of Japan is and why is might be worth preserving even at the cost of economic growth. Yet, at the recent G20 Meeting in London (April, 2009) Japan fully supported the US regarding stimulus spending against France and Germany, for example, who are skeptical that this is the best solution.

Japan remains the US’s staunchest ally in Asia and the suggestion that failure to reform might sap Japan’s “usefulness” to the US is unconvincing. Perhaps what sounded plausible in 2003 is less so in 2009, in the face of a global recession. Tajima and others point out that Westerners are popular in Japan, which is a sharp contrast with how they are depicted and perceived in parts of Africa and in some Muslim-majority contexts, where they are demonized. 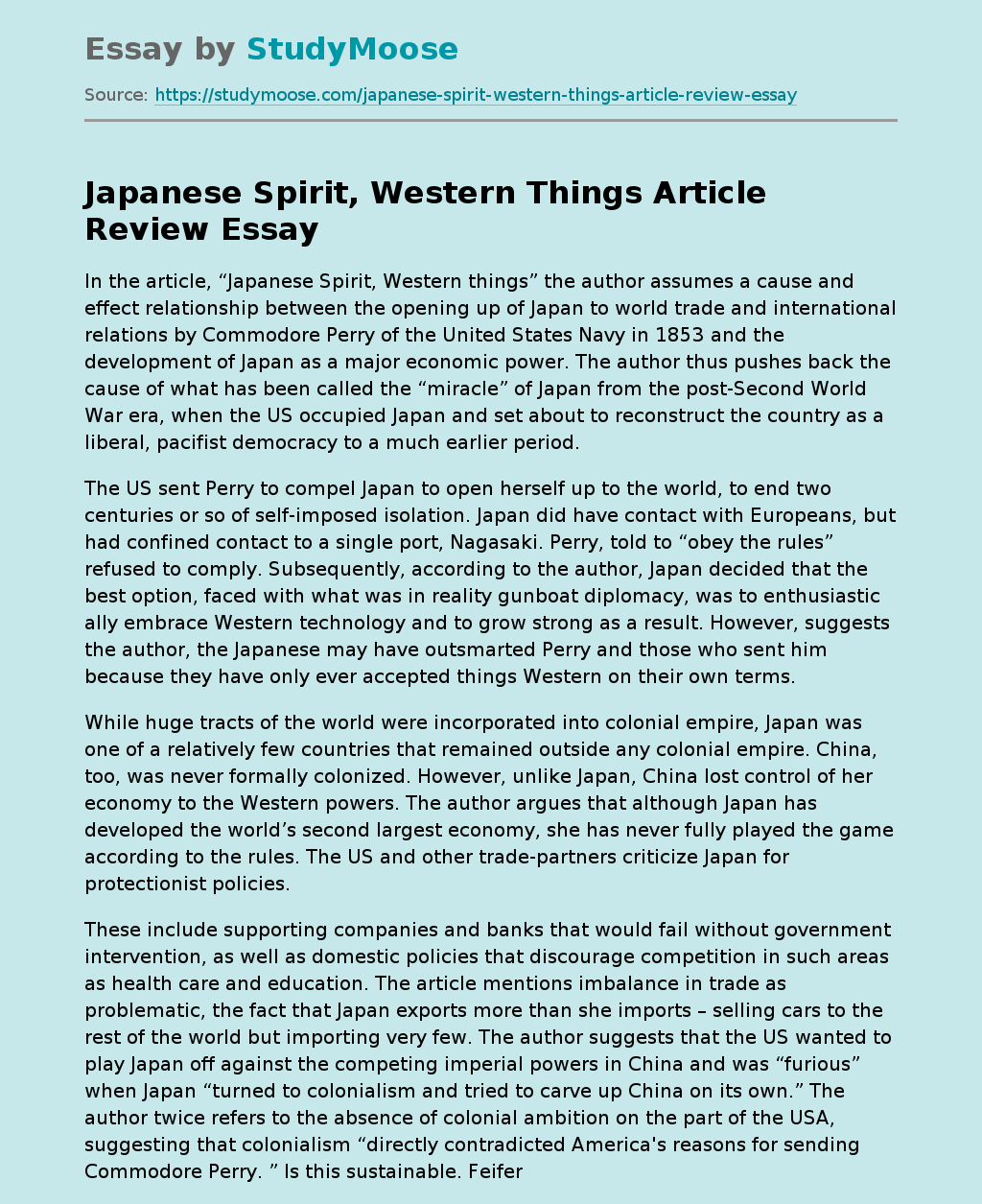