In Of Our Spiritual Strivings, the two main messages that WEB DuBois has to share are of the dangers of double-consciousness and the idea that a Veil exists between White America and African America. He first realized this when he was at school and they were passing around visiting cards and one girl refused to give him a card, simply because of his skin color. He realized at that moment that there was a vast veil between white and black America.

Don't use plagiarized sources. Get your custom essay on
“ Of Our Spiritual Strivings WEB Dubois Analysis ”
Get custom paper
NEW! smart matching with writer

However I found it interesting that he had no desire to attempt to remove that veil.

Instead his desire was for African Americans to stay close to their roots, but at the same time without assimilating into white culture. He also expresses this when he says “After the Egyptian and Indian, the Greek and Roman, the Teuton and Mongolian, the Negro is a sort of seventh son, born with a veil, and gifted with second-sight in this American world,—a world which yields him no true self-consciousness, but only lets him see himself through the revelation of the other world.

” The African American is separate from White America, but yet is still American.

DuBois desired that African Americans should not try to compromise with white america, but be proud of their heritage and yet still be recognized as Americans and not second-class citizens. This quote also leads into his second idea which is the idea that there should be a self-consciousness from African Americans. “It is a peculiar sensation, this double-consciousness, this sense of always looking at one’s self through the eyes of others, of measuring one’s soul by the tape of a world that looks on in amused contempt and pity.

This continues on his idea that African-Americans should strive to be themselves and not something else, and not measure themselves by those that do not value them. In this next quote DuBois states that manhood is attained threw one state of mind, or self-consciousness, which is the viewing of oneself through their own lens and not thru the lens of others. “The history of the American Negro is the history of this strife,—this longing to attain self-conscious manhood, to merge his double self into a better and truer self. In this merging he wishes neither of the older selves to be lost.

He would not Africanize America, for America has too much to teach the world and Africa. He would not bleach his Negro soul in a flood of white Americanism, for he knows that Negro blood has a message for the world. He simply wishes to make it possible for a man to be both a Negro and an American, without being cursed and spit upon by his fellows… ” Double-consciousness should be discarded in favor of self-consciousness, because self-consciousness in the eyes of DuBois offered African Americans the chance to prove themselves to the world and show the world their abilities.

America should not be set in the view as Africans would have it, but rather that America should be a land of incorporation, rather than assimilation. DuBois sought a land comprised of various cultures all equal to each other but no culture striving to be like another, because that would create a culture that would be dominant. He believed that every culture, African culture especially, had something to offer to America. 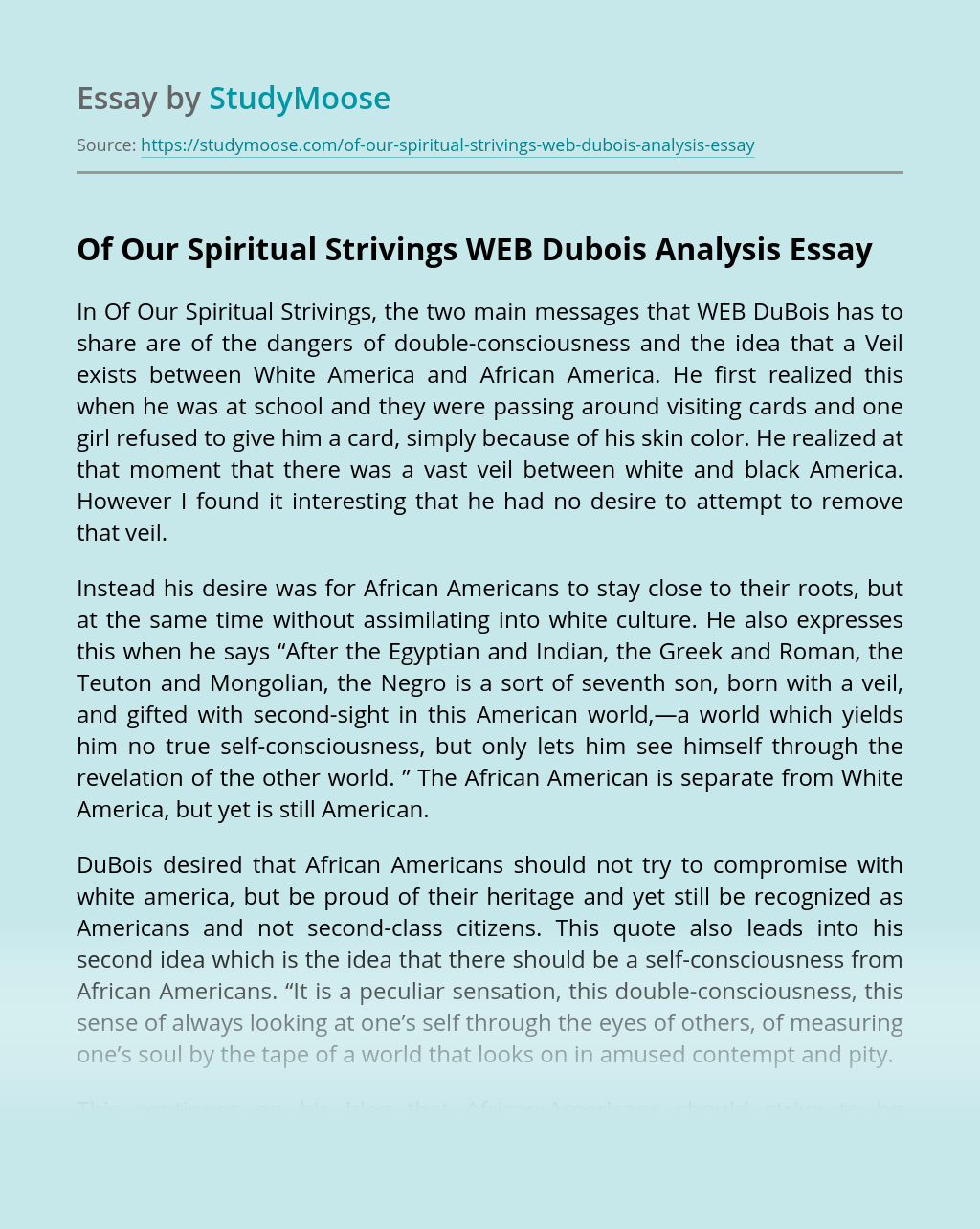