Symbolism and Spiritual Values in Steppenwolf and Siddhartha

The amount of similarities between Hesse’s stories are countless as he is trying to explore the human brain as well as one’s spiritual knowledge. Setting a goal and taking your mind places is very beneficial for mental and spiritual development. Many people in this world believe that there is more to life than the reality we live in. These thoughts can be triggered by many things such as: self taught knowledge, past experiences, or even looking for personal growth.

Don't use plagiarized sources. Get your custom essay on
“ Symbolism and Spiritual Values in Steppenwolf and Siddhartha ”
Get custom paper
NEW! smart matching with writer

Spiritual values are nothing to mess around with and if you’re interested, you’re usually committed.

The correspondence of both Steppenwolf and Siddhartha have the idea of a character finding self realization or fulfillment within himself. The message becomes more clear as the more you read, the more you understand what the main characters are going through. In Steppenwolfe, Harry Haller, who is the main character is spiritually lost and has forgotten his role in this world. Harry has gone through multiple situations that have paved the way for his interest and need of a change.

Towards the end he was at a better understanding of himself with the help of the Magic Theater, but was still left with questions in the end.

The general idea remains the same in Siddhartha as well. A young child named Siddhartha goes out on a mission to help fill this emptiness inside. The journey takes him down a path he did not expect as he must leave his religious aspect behind and focus on the materialistic side of things.

In Siddhartha, there is a very important sign of symbolism with the power of the river. The river is a very strong symbol in the book as it shows the journey one must take and helps satisfy the purpose for this journey, the realization of enlightenment. Siddhartha comes to confess that ‘The river is everywhere at the same time, at the source and at the mouth…in the ocean and in the mountains, everywhere, and that the present only exists for it, not the shadow of the past, nor the shadow of the future…Siddhartha the boy, Siddhartha the mature man and Siddhartha the old man are only separated by shadows, not through reality…Nothing was, nothing will be, everything has reality and presence “ (SIddhartha 87). Another important encounter that Sid must go through to reach his ultimate goal is the being able to locate the Buddha in the crowd of munks. As Sidd and the Buddha have a small conversation Sidd comes to the realization that he won’t be able to reach enlightenment through somebody else’s techniques. After this chat Siddhartha leaves and senses a new life.

Symbolism and Spiritual Values in Steppenwolf and Siddhartha. (2021, Aug 10). Retrieved from https://studymoose.com/symbolism-and-spiritual-values-in-steppenwolf-and-siddhartha-essay 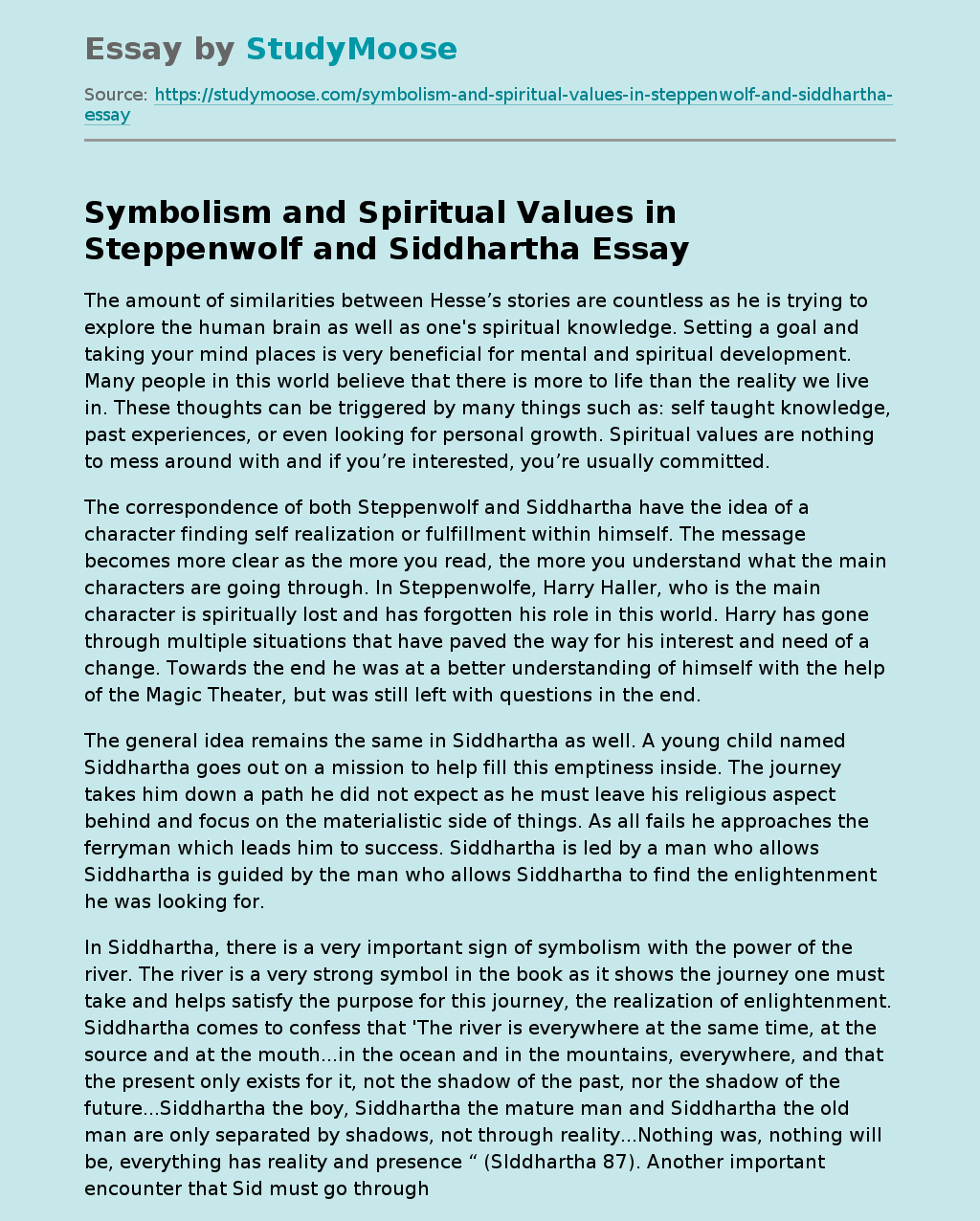