Jamal Wallace made a very important point in the movie just about before the movie ended: …and what’s the reason in having a file cabinet full of writing and keeping the shit locked so nobody can read it? What is that man? I’m done with this shit! – Wallace, Finding Forrester The movie is about a young African-American student who is very smart but does not have any focus in his life, particularly, in his academic studies. He was noticed by an elite school, The Mailer-Callow School, when he scored very high in a standardized test across the state of New York.

Don't use plagiarized sources. Get your custom essay on
“ Of losing families and conquering one’s fears ”
Get custom paper
NEW! smart matching with writer

He was offered a scholarship by Mailer-Callow provided that he will play basketball in the school’s basketball varsity team. It was also about this period when he accidentally met William Forrester (whose identity Wallace only found out later) and has since then became his writing mentor. Forrester has detached himself from the society after writing a Pulitzer-winning novel, The Avalon Landing.

No one knew the reason why Forrester has gone dark.

The two characters became friends and have started to experience change that could not have been possible without each other. Wallace became a personality in the school because of his natural talent in basketball and more importantly, his unexplainable gift in writing. And because the gift cannot be explained, a certain professor, Crawford, somehow was challenged. Crawford and Wallace had a conflict when Wallace tried to stand up and protect his classmate from the intimidating Crawford.

The argumentation ended up with Wallace being an enemy of Crawford.

The conflict of the story was made more obvious at the end of the movie when Wallace and Forrester had an argument on whether Forrester should go to Jamal’s school for the latter not to be accused of academic fraud – plagiarism. Wallace submitted an article with a sub-title similar to what Forrester has already published before. The only way for Wallace not to be implicated is for Forrester to get out, present himself in the academic board in Wallace’s school (or write a letter), and tell them, that he authorized Wallace to used his words.

Wallace has secluded himself for years and he was not about to open up that easily to the society just because of a certain boy stupid enough to break his rule (the essay that Wallace has submitted is an essay Wallace wrote inside Forrester’s house – Forrester and Wallace had an agreement that anything written inside that place will not get out of there). Clearly, the movie’s conflict is more than just Forrester’s “power” to save Wallace from academic doom.

The movie is about the two characters overcoming their fears. In the case of Wallace, he needs to get rid of his racial bias… to get out of the mindset that everything is about the elite and the underdogs. Forrester, on the other hand, has to conquer his fears of developing new friends, new companionships. Forrester is not angry at the society. He is, more than that, afraid that he might, again, lose people that are close to him, people that he has learned to love.

The movie showed us how everyone, no matter how satisfied and happy they might seem, have their own fears and discontentment. It seems that more than just Wallace finding Forrester, as his mentor, as his friend, the movie has successfully showed how Forrester found Wallace – a new friend that made him overcome everything that he has tried to avoid and to run away from. The movie Finding Forrester is not just about losing families and finding new ones. It is about fighting your own self, and in the process, finding the new you. 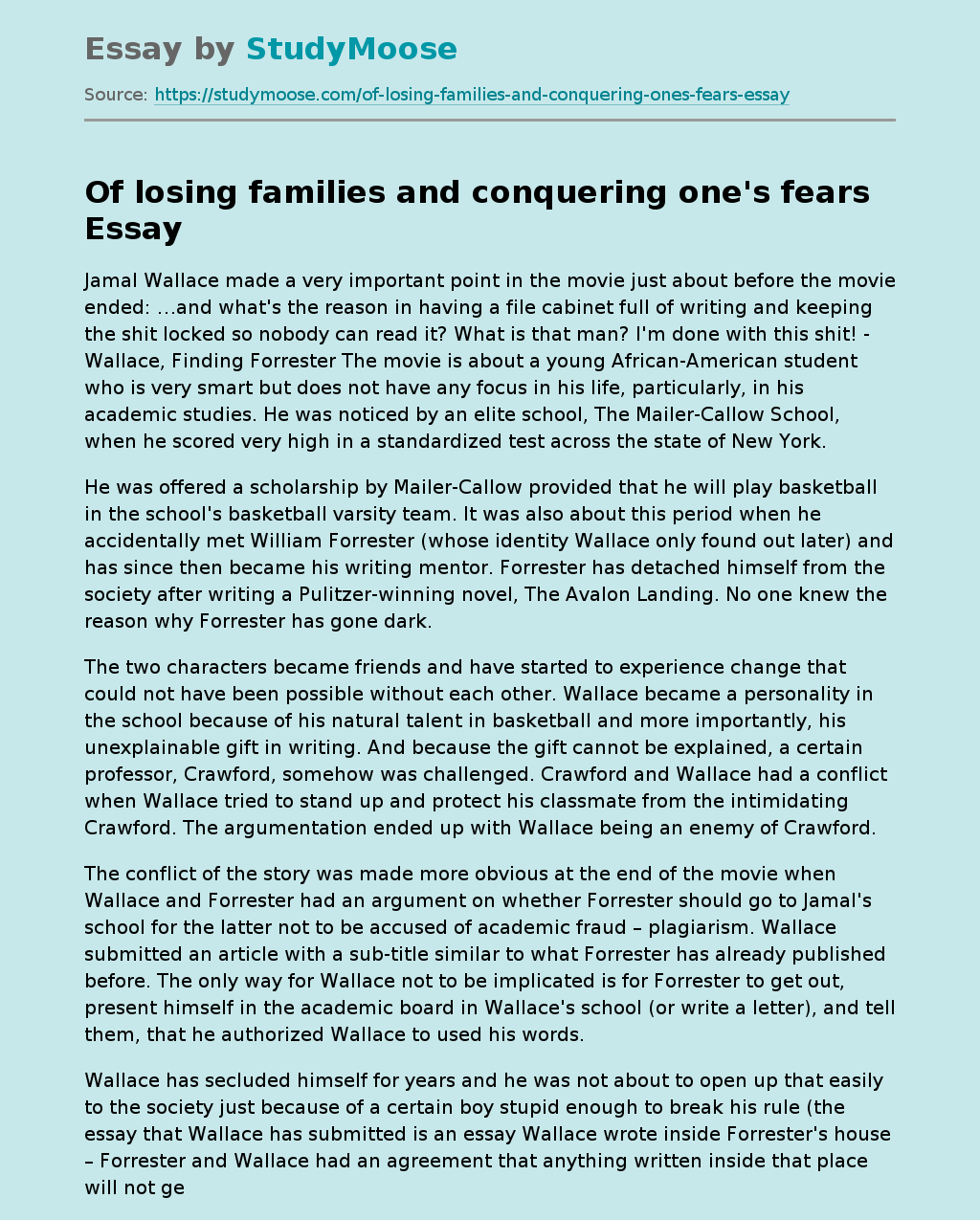