A roller coaster ride contains many loops and twists one after another. At first glance, the ride looks terrifying. I never thought I would see myself ride one until one day my niece forced me to get on one. She was only 13 years old at that time, and I was 20 years old. Being younger than me, I did not want to show her how scared I was, so I dropped my pride and rode it. After discovering the excitement of riding the roller coaster, I became addicted to it and kept riding it over and over again.

Don't use plagiarized sources. Get your custom essay on
“ Riding a Roller Coaster ”
Get custom paper
NEW! smart matching with writer

During the holidays, my family and I went to Enchanted Kingdom in the Philippines.

My little niece, Mai, wanted to ride the roller coaster called The Space Shuttle. Being the oldest, I had to follow her even though I was scared to ride it. While waiting in line for our turn, I noticed many people were anxious to get on, but for me I was nervous like a little boy.

The sun was burning onto my skin and made me sweat more as the line grew shorter. I glanced up to the roller coaster, and I saw that it sped up a couple of times like a plane. At that point, I started to get butterflies in my stomach. By the time I was about to turn around, it was already too late.

“It’s our turn,” my niece yelled with excitement. I became quiet and gave my ticket stub to the person in charge of the ride.

We boarded and buckled ourselves in as tightly as we could. After buckling up, I told my niece that I was scared and I would be closing my eyes during the whole ride. She simply replied by saying, “Don’t close your eyes or it’ll be even scarier; raise your hands up so it’ll be more fun! ” The ride was about to start, and my legs were Tumaneng 2 shivering and my fingers could not keep still.

There was a countdown board in front of us with lights that were red, yellow, and then green. Once we hit the green light, the ride shot forward. I could not believe how fast the ride was going, and all the twist and turns lifted my stomach. I remembered what my niece said, and I followed her instructions. After the ride reached its fastest speed, it suddenly slowed down and in front of us was a hill, so we started to climb. I could hear the chain pulling up the cart, and everyone around me was smiling and having fun. I was already having fun from the beginning of the ride, and I wanted more.

It was like a drug that I could not stop having. We reached the top when my niece yelled, “This is what I’ve been waiting for! ” I put my hands up, and I could see how beautiful the amusement park was. Then, we descended and I screamed my lungs out. As we dropped, we went into a huge loop that made us go upside down. I could not have imagined how much fun I was having. I loved the adrenaline rush that was flowing through my body. This ride alone made my blood pump faster than ever, and I wanted more. To my disappointment, the ride came to a halt because it was over.

We unbuckled ourselves and started to walk down the stairs, with my legs still shivering, but not from in fear but from excitement. I loved the ride! It was fast and had many different twists and turns. In that day alone, I rode the ride almost four times with Mai. Riding the Space Shuttle became my addiction. Each time I go back to the Philippines, I have to get onto that ride. My niece and I had a blast that day, and it is something that I cannot ever forget. The thrill of riding a roller coaster for the first time made me loves it forever. 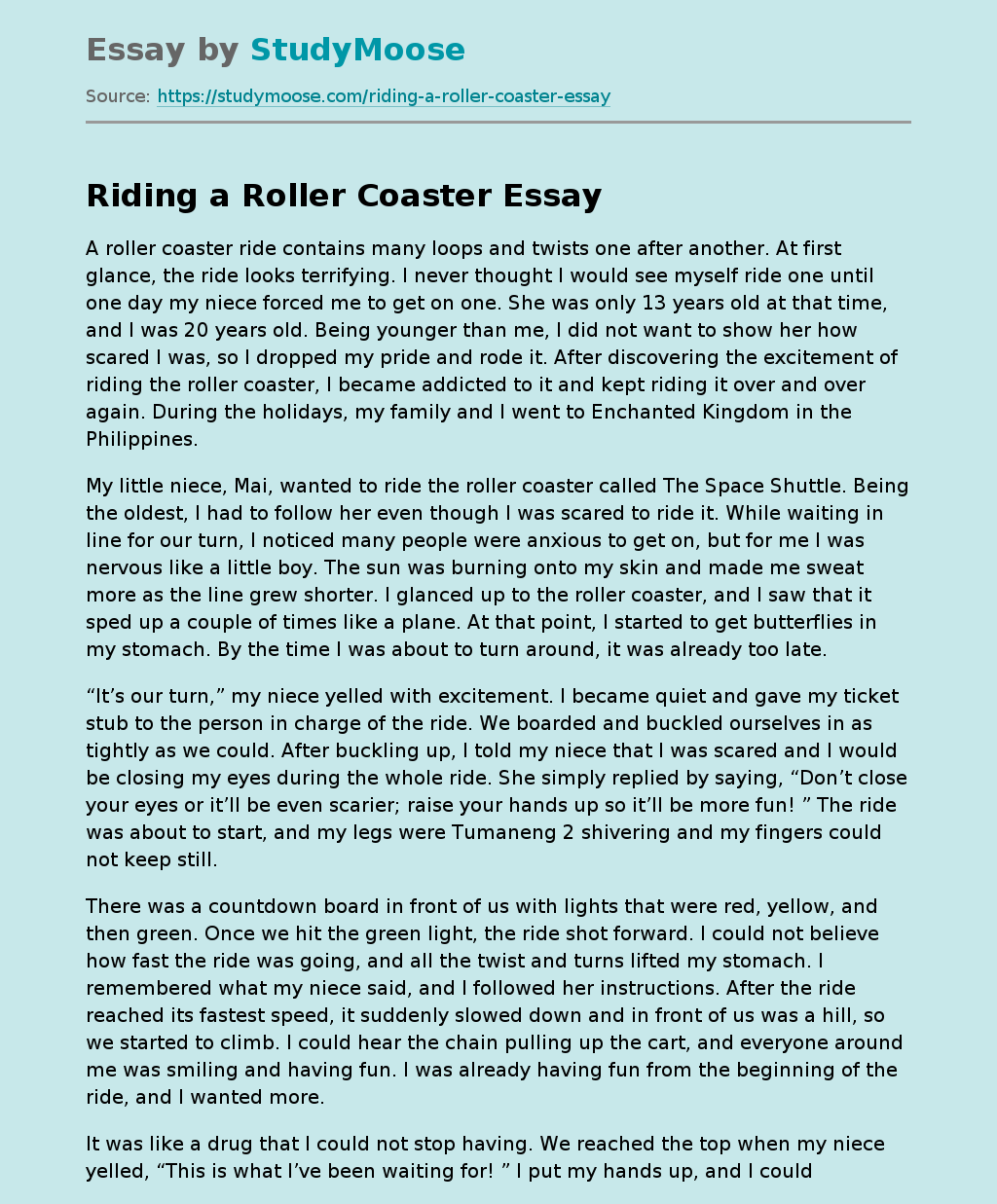