‘Nine politicians sitting on a bench.’ - description of the US Supreme Court

Don't use plagiarized sources. Get your custom essay on
“ ‘Nine politicians sitting on a bench.’ – description of the US Supreme Court ”
Get custom paper
NEW! smart matching with writer

One reason for the view that Supreme Court Justices are ‘politicians’ is due to the appointment process, which has been accused of being politicised. This is because nominees for the Supreme Court are often nominated and questioned based more on politics than on their skills as a judge, which is in contrast to the UK where Supreme Court judges must have been judges in the Court of Appeal, and are selected solely on merit, rather than politics[1].

In the US, the president nominates a candidate, which is more often than not based on politics rather than on merit, and then the Senate votes on whether to approve the nominee. The president always denies that any political consideration in their nomination, however it usually seems to be an underlying factor. Presidents want to choose a justice who has the same political and judicial philosophy as them.

When Bush nominated David Souter in 1990, he was asked by the press whether he had asked Souter his views on abortion (Bush was against abortion). In reply, Bush said ‘It would have been inappropriate to ask him his views on specific issues’[2]. He was thought to be a strict constructionist, but proved to be one of the most liberal members of the court.

This could be perceived in one of two ways. The first is that Bush may have elected Souter based solely on his ability as a judge, which is suggested by the fact that he made decisions that Bush may not have made, or alternatively, Bush chose Souter as Bush thought Souter would reflect the president’s own judicial and political philosophy, as he was expected to be a strict constructionist, but this backfired. Bill Clinton nominated 2 justices during his presidency, both of whom reflected his own political philosophy, in that their stances in Supreme Court decisions are consistently liberal. This is evidence that presidents appoint justices based on their judicial philosophy, as well as evidence which supports the statement that the justices are politicians, as they are chosen on their politics as much as their judicial expertise.

The senate has the role of confirming Supreme Court nominees. Much of the time, the candidate is rejected because of their judicial philosophy. Robert Bork was nominated to replace Lewis Powell in 1987, who was considered a swing justice, and was often the deciding vote[3]. Bork was considered one of the most outstanding legal scholars of his generation, and so was obviously well qualified for the position as a Supreme Court Justice. However, he was an advocate of the judicial philosophy originalism, which tries to discover the original meaning or intent of the constitution[4]. These highly conservative views were unacceptable to the Democrat controlled Senate, and so they rejected his appointment[5]. This is evidence that the appointment process is further politicised, as the senate rejected an appointment solely on his judicial philosophy. This is also evidence that backs up the statement that the Supreme Court is no more than a bench of politicians, since a more than qualified judge was rejected because of his political philosophy.

A similar situation occurred when Clarence Thomas was nominated in 1991. The Senate could have questioned whether he was qualified for the role of Supreme Court justice, but instead chose to focus on his conservative philosophy and sexual harassment allegations. Again this is evidence of the politicised nature of the nomination process, which provides further evidence that Supreme Court justices act as politicians.

All of the criticisms made about the nominees above sound more like criticisms of a candidate running for political office. This shows that the Supreme Court is more accurately described as being made up of 9 politicians, since they are treated as politicians during the nomination process, not like someone being interviewed for a normal job.

The main reason that the 9 Supreme Court justices are described as 9 politicians is because each justice has their own political philosophy which can greatly alter how they decide a case. For example, ‘the right to bear arms’ could mean that US citizens have the right to own any gun they like, without any restrictions to how they get that gun, or it could mean that US citizens have the right to own one handgun, but must have a licence. This is just 2 ways it could be interpreted, and the Supreme Court has the power to decide what the constitution means. There are 2 philosophies which a judge can hold to varying degrees; strict constructionism and loose constructionism, or judicial restraint and judicial activism. Strict constructionists interpret the constitution in a literal way, trying to fulfil the original intent of the founding fathers. Loose constructionists interpret the constitution in a liberal fashion, being more prepared to move away from the literal interpretation[6]. Judicially activist judges hold the view that judges should use their position to promote desirable social ends, whilst judicially restrained judges believe that any changes to society such as laws in gun control, abortion or the death penalty should be left to the politically accountable legislative and executive branches[7].

Judges who exercise a judicially activist philosophy act more like politicians than those who operate under a judicially restrained policy. For example, the Warren Court which operated from 1953-69 under Earl Warren, decided cases which created huge social change. For example, in the case of Brown v Board of Education for Topeka (1954), the court ruled that the earlier case of Plessy v Ferguson was unconstitutional, and therefore made segregation in public places illegal. A judicially restrained judge may have decided that it was up to congress to make segregation unconstitutional, but these judicially activist judges decided that it was part of their role as a justice to change the constitution.

The Burger Court was another judicially activist Supreme Court, led by Warren Burger. In the case of Roe v Wade (1973), they decided that abortion was constitutional and part of a woman’s implied right to privacy[8]. The debate on abortion in America is a hugely divisive one, and so the decision in Roe v Wade was extremely significant. Because the decision had the same effect as Congress passing a law allowing abortions, this shows that the description of the justices being more like politicians than judges is an accurate one, as they made a very political decision.

Other courts have been more restrained, such as the Rehnquist court which operated from 1986-2005 under William Rehnquist. Perhaps the most significant case decided by the Rehnquist court was Bush v Gore (2000). Rehnquist had been appointed by Bush’s father, and now had the chance to resolve the 2000 election. It handed the election to Bush, which some saw as ‘partisan to the point of criminality; others saw it as a pragmatic intervention, which had the merit of closing the already protracted election dispute and allowing the task of government to continue.[9]’This was clearly a very political decision, despite the fact it was a more restrained court, which proves that even the judicially restrained courts still act as politicians, as the Supreme Courts role was similar to the House of Representatives role in voting for the president in the event of a tie of the Electoral College. Although the circumstances were different, the Supreme Court effectively decided the winner of the 2000 presidential election, an undoubtedly political decision, which again supports the view that the Supreme Court is best described as ‘nine politicians sitting on a bench.’

The Roberts court which is currently in operation under the Chief Justice John Roberts is also a judicially restrained court, with Bush appointing both Roberts and Alito to the court. Roberts promised not ‘legislate from the bench,’ meaning that he would not overreach his powers, and act as only a judge interpreting the law. This was shown in the case of Gonzales v Carhart (2007), where the court upheld the constitutionality of a law passed by congress banning partial-birth abortions. The court had left the legislative power to Congress, instead of finding it unconstitutional, which means that the court could not accurately be described as ‘politicians sitting on a bench.’ However the opportunity still existed for the court to find it unconstitutional, and in Citizens united v Federal Election Commission (2010), it found provisions of the 2002 McCain-Feingold Campaign finance legislation as unconstitutional. This shows that the justices will still act like politicians, even in a restrained court such as the Roberts Court.

Whilst the court undoubtedly has made decisions which could be described as political, they were created by the founding fathers to check the powers of both Congress and the presidency, and in fulfilling this role, it may mean that they have to make political decisions. They are not politicians which have been elected to make decisions, they are there to interpret the constitution as they see it. If that means that they make decisions which have huge implications for US society as Brown v Board of Education for Topeka or Roe v Wade did, then so be it.

In conclusion, I don’t think that the description ‘nine politicians sitting on a bench’ is a fair or accurate one of the Supreme Court. The decisions that the court makes are indeed political, but their job is to interpret the constitution, and they do this as they think the constitution should be interpreted. The court is like a quasi-legislative body, but they act as they believe is right in accordance with the constitution, as they are unaccountable, and therefore do not need to worry about the politics that comes with their decision.

‘Nine politicians sitting on a bench.’ - description of the US Supreme Court. (2020, Jun 02). Retrieved from https://studymoose.com/nine-politicians-sitting-bench-description-us-supreme-court-new-essay 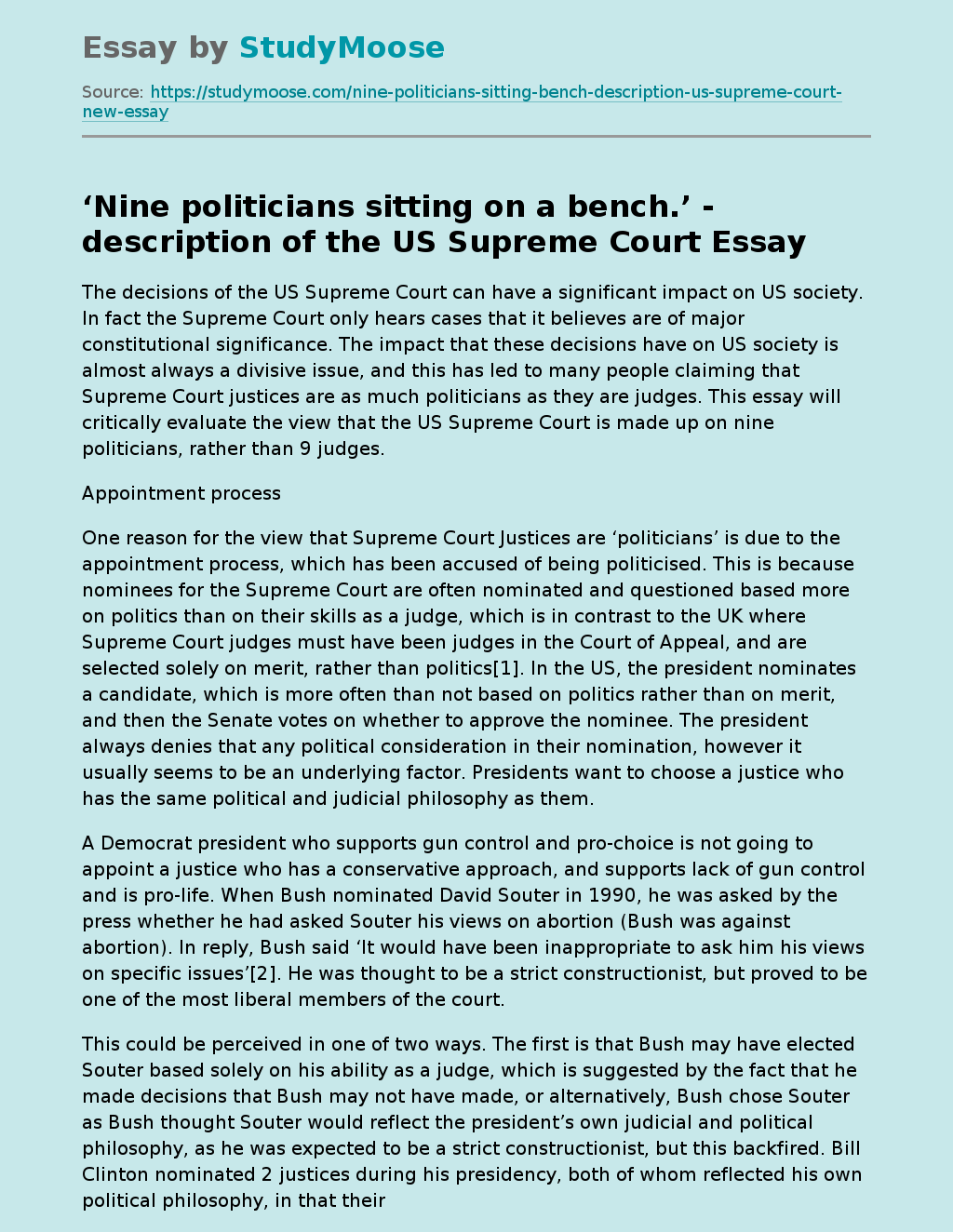