“It’s about time law enforcement got as organized as organized crime.” (Rudy Giuliani). In this media analysis, I will analyze three episodes from the American TV series Brooklyn Nine Nine and the significant themes it depicts about law enforcement. Brooklyn Nine Nine reveals the various problems that goes on with law enforcement, prisons, and criminal justice such as racial profiling of African Americans and other visible minorities, the dangers of inmate gangs in correctional institutions, and the high stress levels police officers can endure.

In one episode of the show Brooklyn Nine Nine called “Moo Moo”, it illustrates the recurring problem of discrimination and racial profiling in our society. A police officer must be fully aware of the legislative provisions that requires them to treat all citizens equally. However, in many cases police officers do not follow these laws which results in racial profiling. Racial profiling can be defined as individuals being targeted or suspected of having committed a crime based on their race or ethnicity (Griffiths, page 112).

In this episode, Sergeant Terry Jeffords who is African American, was off-duty and walking along the streets of his neighborhood when he was suddenly stopped by a white police officer. The police officer was aggressive with Terry and did not let him say a word, until after he arrested him and he was able to tell the cop that he is a detective.

In addition, the officer tried to justify his actions by saying that Terry didn’t exactly fit into the neighborhood and that it was common for him to receive calls that a black man was being suspicious in that neighborhood.

According to the Montreal police Department, there is a widespread of racial profiling among police officers and they have initiated training programs to alter the police culture. However, between 2011-2012 and 2012-2013, the number of complaints filed with the Quebec Human Rights Commission increased by a total of 52 percent (Griffiths, page 112). This episode shows that racial profiling is a recurring issue in society and that visible minorities are constantly being seen a suspicious or a threat by police even in their own neighborhoods or probable cause.

In another episode of the show Brooklyn Nine Nine called “The Big House part 1”, it illustrates the inmate subculture in prisons as well as the severity of inmate gangs. The inmate subculture can be defined as the certain forms of relationships and interactions that occur between the inmates in prison (Griffiths, page 248). While serving their sentences, inmates are forced to become socialized with the values and norms and culture of the prison, one of which might be joining an inmate gang (Griffiths, page 248). In this episode, one of the detectives has been placed in a prison to serve his sentence and seeks protection from the other inmates by attempting to join a gang. In order for Jake to be part of the gang, he has to get a guard that the gang leader dislikes fired. Jake decides the best way to get the guard fired is by filming him getting physically assaulted by the guard and showing it to the warden.

It is said that inmate gangs have become an increasing challenge for prison administrators and according to studies, one in six federal convicts is associated with a gang (Griffiths, page 248). Gangs in correctional institutions usually participate in a number of criminal activities such as smuggling contraband and selling drugs to inmates, and blackmail (Griffiths, page248). Another activity gangs participate in is physical assault of other inmates and correctional officers and in some extreme cases cause riots in the prison. This episode demonstrates the dangers in correctional institutions and the severe methods inmates have to take to survive in prison.

Lastly, in the episode of the show Brooklyn Nine Nine called “Christmas”, it demonstrates that although being a police officer is satisfying, it has its challenges and can be very stressful. Police officers that work in high-demand environments where back-up is not always available, experience the highest levels of stress (Griffiths, page 88). In this episode, Sergeant Terry Jeffords has to receive a psych evaluation from a therapist to determine whether or not he is ready to go back into the field. He was placed on desk duty for a few months after he had a breakdown during a routine shooting exercise and was deemed unfit for the field.

Additionally, studies have indicated that continuous exposure to stressors can lead a police officer to “burnout” which can be defined as emotional, mental, or physical exhaustion, and these high stress levels can make that officer more vulnerable to misdemeanors (Griffiths, page 88). This episode demonstrates the severity police work can do to an officer and the danger that officer could have put other officers and civilian in.

In conclusion, the TV series Brooklyn Nine Nine addressed the significant themes that relate to law enforcement and criminal justice. The show displayed the role of the police in our society and the numerous issues linked with law enforcement such as discrimination and racial profiling of visible minorities, the significantly high levels of stress some police officers undergo while on the job, and the dangerousness of inmate gangs in correctional institutions. 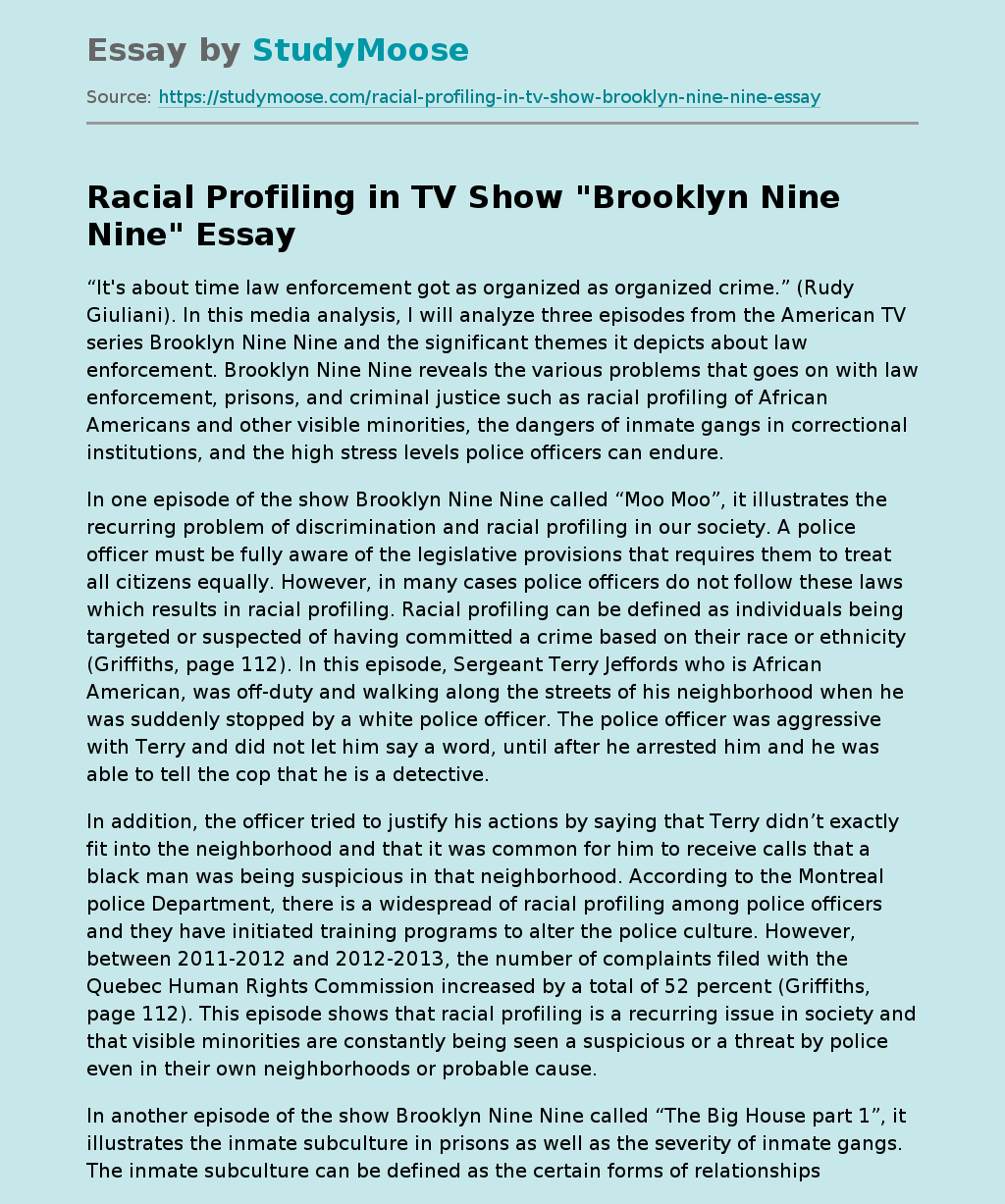