For my observation paper, I chose to visit the Wayne County Circuit Court (Family Division), which is located at 1025 East Forest in Detroit. The date of my visit was March 6th and I was there from 8:45 a.m. until 11:30 a.m.

There is a neighborhood surrounding the court, however it is also right off of I-75 and minutes from downtown, which makes it very easy to locate. When I arrived, I found parking to be very easy and I parked across the street on Forest.

Don't use plagiarized sources. Get your custom essay on
“ Court Observation Paper ”
Get custom paper
NEW! smart matching with writer

When I walked into the Court building, I was immediately met by metal detectors and 5-7 security guards. The guards asked me to empty out my pockets, open my jacket and then pass through the metal detectors. As I walked around the court building, I also noticed that there were security guards at every exit door and they made sure nobody entered, only exited. There were also Wayne County Police Officers in most of the courtrooms I looked into.

In my opinion, security measures were very good at this location and I felt very safe.

The building itself was ordinary, nothing to fancy. The outside of it looked like any other building in Detroit and it was hard to tell what the building was without knowing. The inside was the same, very ordinary. The staff was very helpful. When I first walked into the building, I walked over to the receptionist’s desk, which was surrounded by bulletproof glass, and told her who I was and why I was there.

She then told me that I was welcome to sit in on any of the hearings going on that morning as long as it was all right with the judge/referee. She also told me that there were courtrooms on the first three floors. I decided to go to the third floor because the first two were crowded. As I was walking through the hall, I was looking into the different courtrooms to see if anything was going on. Finally I looked into one of the last courtrooms and saw someone I recognized, not a student, but the judge. I couldn’t remember where I knew him from, but I recognized him from somewhere.

I walked in and told him who I was and asked if he would mind if I sat in on the hearings he had today. He told me that he had no problem with it and that there would be two pre-trials today. It finally hit me who the judge was; it was Former State Senator Chris Dingell, who was the Downriver Area representative and I’m from that area. He introduced himself to me and began to tell me some things about his background. He told me that he was very new to this, just being elected at the end of 2002 and sworn in officially at the beginning of 2003. He explained that for the most part, a lot of the cases that he’s seen so far have been juveniles from single parent homes and that he believes family structure plays a big part of how a child is raised. He also told me that he strongly believes in boot camps to rehabilitate juveniles and that religion gives good structure to young adults and helps point them in the right direction.

Inside the courtroom, there was a picture of the Boblo Boat, a painting of deer and a fan on the walls, along with the seal of the County of Wayne behind the judge. The lighting was adequate and for the two pre trials I observed, the seating was adequate as well, however, Judge Dingell told me that sometimes there is not enough seating for everyone. There were two computers in the courtroom, one for the judge and one for the judge’s secretary, who uses it to schedule trial dates. There was also a microphone available to the judge, however, it was not used in either of the pre trials and it was not necessary because there weren’t many people in the courtroom. The proceedings were recorded by a court reporter who typed out everything that was said “on the record”.

The first pre trial that I observed was a case of Malicious Destruction of Property in a building. The offender was a 15 year old white male. In this case, both of the juvenile’s parents attended the pre trial. As soon as the pre trial started, the judge asked everyone (the defendant, both attorneys and the parents) to introduce themselves. After that, the judge advised the defendant of his rights and that he has a right to speak to his attorney at any time during the trial. Judge Dingell then asked both attorneys to go into his chambers with him.

He told me, before the trial started, that he does this in every case to see if the two sides can bargain. After about 10-15 minutes, everyone came out of the judge’s chambers and the judge asked if both sides had reached a bargain. The prosecutor said that he’d lower the charge to Malicious Destruction of Property under $200 if the defendant pays restitution and testifies in the cases of the other parties involved. After this, a trial date was set for April 2nd at 9 a.m.

During the pre trial, the defendant sat in his chair and held his head up with his hands, while looking around the room. He seemed disinterested in what was going on around him. After the judged asked the defendant if he understood his rights, the defendant said “yeah” and his mother immediately told him to say “yes, sir”. In my opinion, from what I saw, both parents were interested and involved with their son’s life, however, he may have gotten caught up with the wrong group of friends. Both attorneys really didn’t do much during the pre trial. It appeared they were just going through the motions. The judge asked if anyone had any questions and then dismissed them.

The second pre trial I observed was an attempted B&E of a vehicle. The defendant was a 17 year old black male. This case was scheduled to start at 9 a.m., however, it didn’t start until 10:14 a.m. because the defendant and his mother were late. They told the judge they couldn’t call and tell him they were running late because they have no phone. Before the judge knew they were going to be late, he discussed writing up a writ for the mother and the juvenile. The judge explained this to me as kind of like a warrant, but gave me the exact definition as being “An official court document, signed by a judge or bearing an official court seal, which commands the person to whom it is addressed, to do something specific”. The trail finally began and the judge again asked everyone to introduce themselves.

He then explained the defendant’s rights to him and then asked the attorneys into his chamber. While the judge and the attorneys were discussing the case behind closed doors, the Wayne County Police Officer assigned to this courtroom came up to me and told me that most trials go by much faster, but Judge Dingell is new, so it takes longer. He also asked me about my education and what I wanted to do after college and told me about the hiring process of Wayne County Police Officers. When the two attorneys and the judge came back, the prosecutor offered to lower the charge to tampering with an automobile and payment of restitution. The trial date was set for April 11th at 10 a.m. Before the judge dismissed he asked the defendant if he was in school and the defendant said no, but he was enlisting in the job corps. The judge then asked if the defendant had a pastor in his church that he could bring to the next trial. The mother said that they did have a pastor, but they haven’t been to church in 2-3 months. The judge also asked where the defendant’s father was and his mother told him that the last time she heard from him was a year ago and he was living in a motel in Melvindale.

During the pre trial, the attorneys again just went through the motions, except for when the defense attorney walked in and greeted the judge. After he introduced himself, Judge Dingell told him that his wife always told him to button his collar on his shirt before leaving the house (the attorneys collar was unbuttoned). The attorney apologized and buttoned his collar. This may have been just a minor incident, but it showed me that Judge Dingell is very serious when it comes to his courtroom and he likes to bring structure to it. During the trial, the defendant faced the judge the whole time and answered every question with “yes sir”.

My observations of Judge Dingell throughout the pre trials and in talking to him, was that he is very professional, organized and personal. He explained to me everything he had done after the pre trials had ended and even gave me some advice on law school (I told him I was thinking of applying after I graduate in December). He asked me about my background and told me about his family background and how he became a judge. He seemed to be on a personal level with the two juveniles he had in his courtroom, especially the second one. I’ve never heard of a judge asking a defendant to bring his pastor to trial with him, however, I could tell by just talking to Judge Dingell that he is a very religious man.

Overall I had a very good experience at the court and even though I only got to see two pre trials, Judge Dingell told me I was welcome to sit in his courtroom anytime.

Still, one thing surprised me during the pre trials and that was the fact that Judge Dingell asked one of the defendants to bring in his pastor and not the other. My only explanation for this was the judge believed in family structure and the first juveniles parents were both involved in his life, however, the second juvenile only had his mother and the judge might have though the church could help structure his life better. Personally I would like to work in this kind of environment, especially if you can help turn some of these kids around and point their lives in the right direction. I believe that’s what Judge Dingell is trying to do, point each kid in the right direction and make sure he only sees them once. 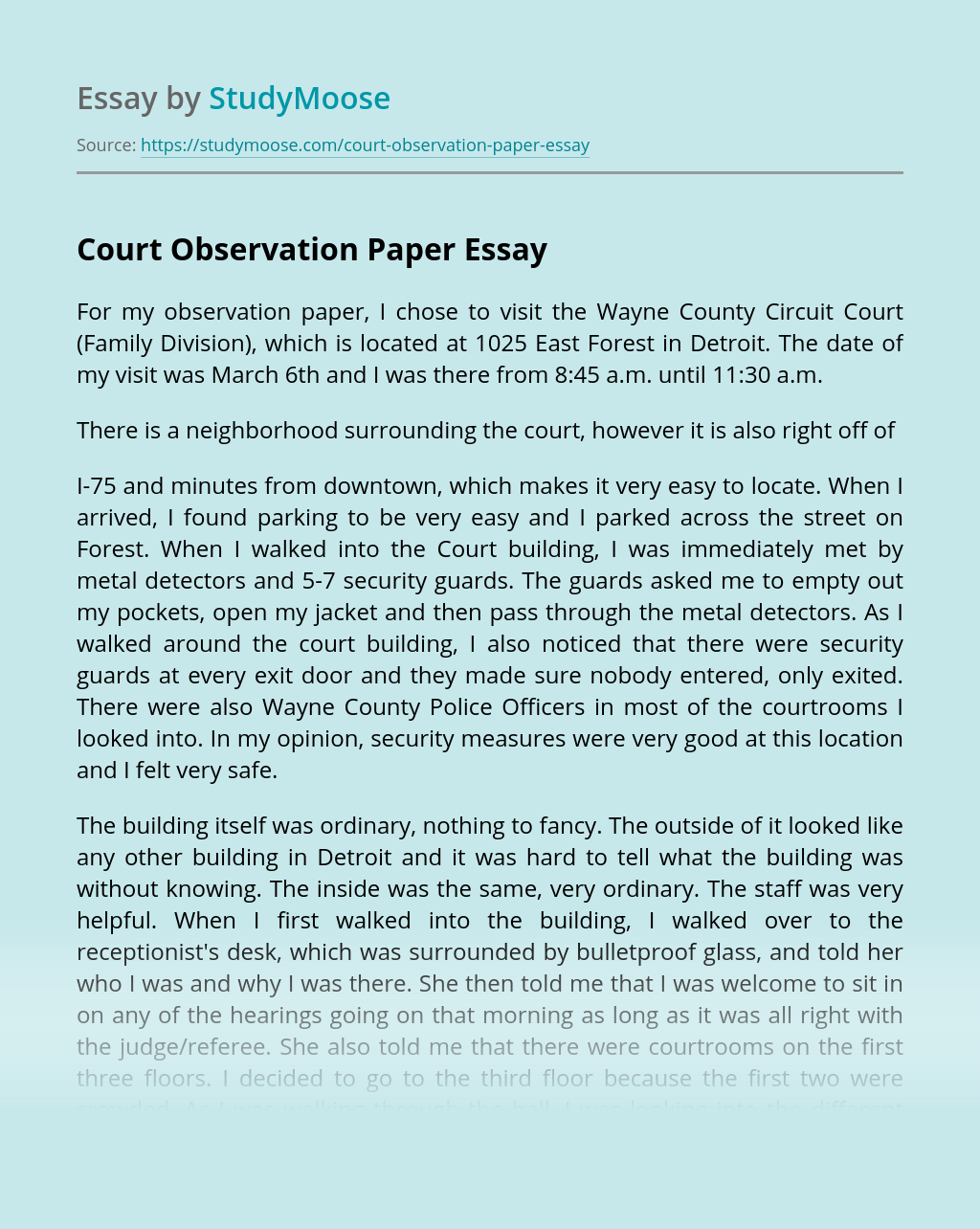