Mrs. Cash’s 3rd grade classroom is a comfortable and safe environment for all of her 16 students. She has a very successful approach to education. Throughout the short amount of time I spent at Pelican Elementary, I was introduced to sheer creativeness. During my observation time, I was able to grasp the materials she used, the classroom environment, and the outcome of the classroom’s learning experience. Cash’s methods of teaching are primarily centered on teacher-student interaction. Her ability to serve a multitude of unique needs within the same class is no small feat.

Don't use plagiarized sources.
Get Your Custom Essay on Classroom Observation Just from $13,9/Page

As it is an effective learning tool, the majority of the school days are filled with laughter. Because I observed on a Friday, though, I only got to witness test days. In the morning, her students begin with breakfast in the classroom. Mrs. Cash has ‘specials’ right after this because she is in the Green Hallway. ‘Specials’ consist of classes like art, gym, music, etc. She would then take them to lunch at 10:30.

When they returned to the classroom, they headed straight into ‘A. R. Time’ where they would read a book on a certain level and then answer questions about that book on the computer.

The questionnaire was for the teacher to know the students understood what they read. Each grade level is in a different colored hallway because their rotations are at different times in the day. The hallway that held her classroom was more toward the center of the school. The hallway to her left was the ‘Blue’ hallway for second grade and the hallway to her right was ‘Red’ for fourth grade. In the middle of all the hallways and the main focus of the school was the library. I liked this set up a lot because it showed how important books and reading was.

This is where the school was able to show its diversity because there were posters on the walls with different ethnic children promoting sharing and equality. On the backside of the bookcases, there were anti-bullying posters and posters that encouraged speaking out and asking for help. This showed that the school helped students who were being bullied and who had problems at home. After all that was through, they started Language Arts. They took several quizzes where she would have the students put up privacy folders. Because I only witnessed test taking, I didn’t get to truly appreciate Mrs.

Cash’s teaching method but I did get to see how she treated each student individually. She walked around the classroom and gave them pointers on how to hold their pencil and gave each child the time they needed to finish. She made the entire class look at her as she read spelling words aloud and then had them give her thumbs up when they finished writing them. The remarkable thing about Mrs. Cash is that she has a lot of patience and gives everyone the time they deserve. By doing this, it showed that she took the time to give everyone the time and materials they needed, regardless of racial background, to finish their work.

She worked with everyone’s learning ability to help them succeed. When this subject was over, she took them outside to recess. I did not like this part of the day because it felt as though the day’s schedule was run by Mrs. Cash herself. She took them to recess when she thought it was necessary and then brought them back inside, after what felt like 10 minutes, because she was too hot. The schedule they had did not seem as though it was the school’s plan, but the teacher’s and that each teacher had their own. There were a few children who lost their privilege due to misbehaving and had to sit out while they finished late work.

I thought this was a good method to use to teach students to turn in work on time. The academic lessons I watched with Mrs. Cash were focused on reading, writing, and spelling. The criteria seemed very enjoyable and quite natural to teach. The students are quite comfortable and challenged in a healthy way. When they completed a worksheet together, most of the class excelled in getting the right answers and Cash fed off of everyone’s contribution. She never pushed down an answer, even if it was wrong, and made everyone feel like their contributions were appreciated.

I admire this because it is very difficult to achieve comfort of that level in a classroom for only a few short weeks. Being faced with adversity in the classroom is an everyday, perhaps every hour occurrence. Mrs. Cash engages her students’ adverse behavioral problems with ease. She agrees that “You must choose your battles”, and that, “Not every action deserves a reaction. ” This concept, although not novel, is quite challenging for most. Luckily, she has had a lot of practice. I did notice, though, that she had the students who were grasping the material easier farther away from her desk than she had the ones who were struggling.

I feel as though some of the students knew she did this and therefore did not want to try as hard. When facing diversity herself, though, Mrs. Cash did not treat everyone fairly. There was one boy in particular who she constantly picked on. He was of Latin descent and, I’m sure, spoke a form of Spanish, but he understood and could speak English. I understand that in most cases of diversity the language barrier is the biggest struggle, but there is more than one way to accommodate a student who does not understand English.

I am not sure if he was just having a bad day, but he was being difficult with fulfilling requests. Cash would say things such as, “I know you understand English . . . ” or “You’re not moving fast enough handing out those papers” as she would snatch them from his hands and turn away as though he were wasting her time. In these circumstances, I understand that she may have been flustered because it was a Friday, but I would have used different words and definitely a different tone of voice or even had an interpreter if I was struggling to communicate with him.

The materials used within the classroom were varying. Mrs. Cash labeled everything to keep the classroom neat and organized. This also stimulated the students’ mind because they were subconsciously reading the labels and constantly learning where the materials went. They had purple folders during ‘A. R. Time’ that held their books and quiz scores in one place. They had cubbies that were assigned by seat number and all their school supplies stayed in there during the day. The subject text books were in bins lined up at the front of the class where a ‘Team Leader’ would retrieve them when needed.

Mrs. Cash’s tidiness lends greatly to the success of her students. Her classroom is absolutely wonderful. She had an assortment of posters and class work tacked on the walls and a variety of knick-knacks all throughout. She had nicely scented soap that she bought for the class in an amusing pump on the sink, she had silly window stickers on the windows and she had a collection of funny pens and pencils on each table. The tables were set up in four groups of four individual desks and there were assigned ‘Team Leaders’ and “Material Monitors’.

Her classroom decoration was fluid and made it a better learning environment because the students were facing each other, and not toward the teacher. This gave them opportunities to work together and to improve their social skills. What I did not like about the classroom was that it was openly joined with the one next to them. It was hard for some students to test because the class next door was being taught a lesson and therefore making a lot of noise. When Mrs. Cash asked the teacher to quiet her classroom down, she apologized but made no changes.

This irritated me because it wasn’t fair to the students. I assume the classrooms were designed this way to save water, because of fewer bathrooms, but it is not a very constructive learning environment. A wife, mother and distinguished grade school teacher, Mrs. Cash has been an ideal observation candidate. Her approach to education is a successful one. Taken away is an informed standpoint about teaching young students in general that assists greatly to the morale of a perspective teaching professional. 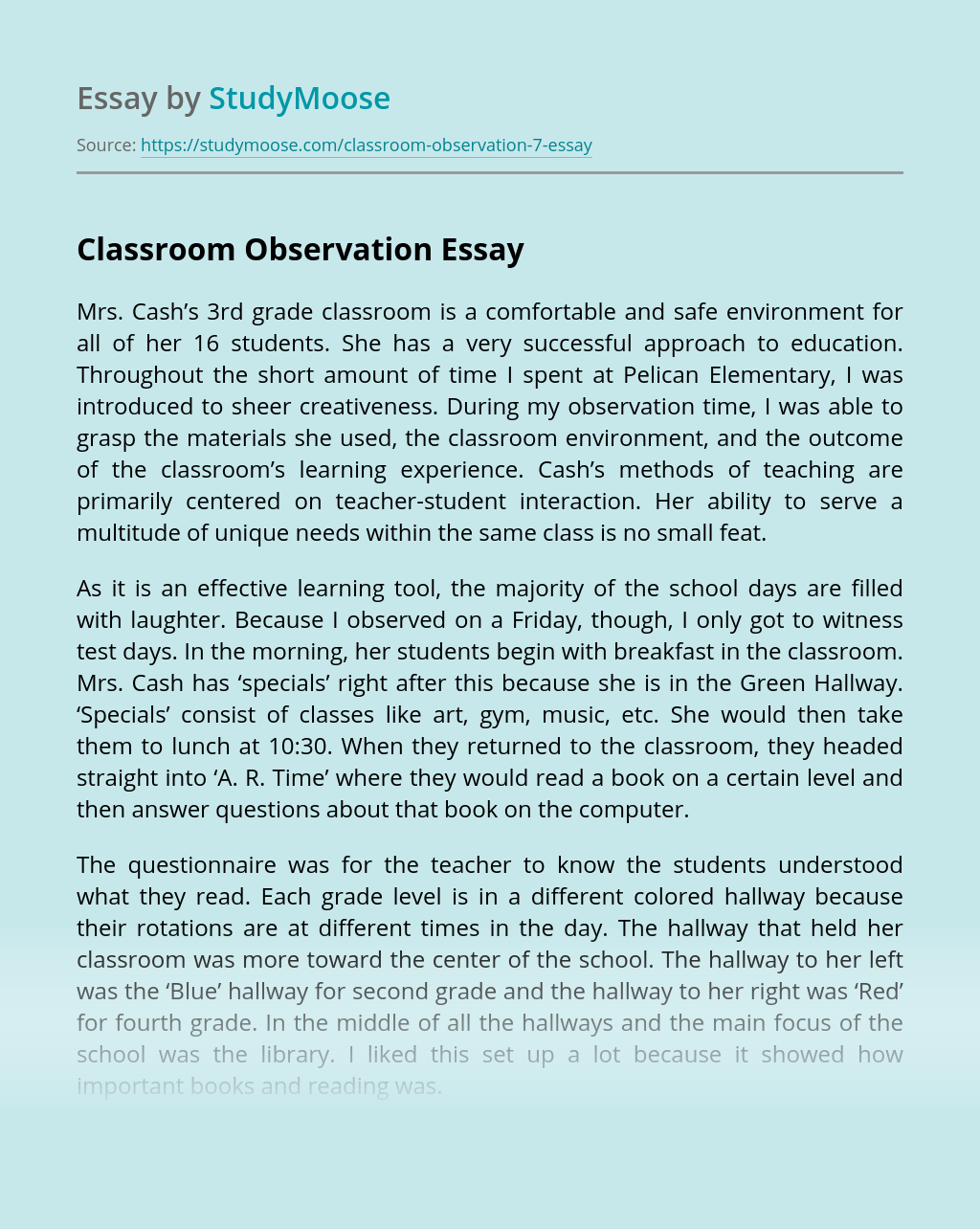 Through interaction with others on a daily basis, we acquire the meanings, values, norms, and styles of communicating” (Ting-Toomey). Culture can be defined as the cumulative deposit of knowledge, experience, beliefs, values, attitudes, meanings, hierarchies, religion, notions of time, roles, spatial relations, concepts of the universe, and material objects and possessions acquired by a group... VIEW ESSAY

This short story is by Bruce Ballenger. Bruce is a teacher a college and talks about how some student have a hard time writing. He talks about how a lot of people criticize the students about writing. One example is how he hears the doctor, his colleagues, commentators on the radio, and strangers talk about... VIEW ESSAY

Aeneid – Dido BY EvasyLY The Aeneid – Character of Dido Dido is the queen of Carthage, daughter of Belus. Like Aeneas, Dido fled her homeland because of circumstances beyond her control. She leads her people out of Tyre and founds Carthage. When we first meet Dido, she is busy leading her people to build... VIEW ESSAY

What do you do for the Earth? An environmental hero is someone who aims to take good care of his environment and makes a great impression for the benefit of its generation and the generations to come. Heroism comes from someone who is ordinary, but actually does something more than someone who is capable. It... VIEW ESSAY

Johann Wolfgang von Goethe is probably the most famous German writer. He has often been called “the last true polymath to walk the earth”. Although he was not born there, he spent most of his life in Weimar in the former East Germany. Write a brief research paper in English (500 words), make sure to... VIEW ESSAY