Formal research has been conducted how the presence of disruptive behavior can affect the student’s performance in class by Ayllon and Roberts.

Don't use plagiarized sources. Get your custom essay on
“ Falling Asleep in Class – Observation Project ”
Get custom paper
NEW! smart matching with writer

The study involved a teacher who “conducted 15-min performance sessions in her reading class during which written academic performance and disruptive behavior were recorded” (Ayllon and Roberts, 1974). The results depicted that with a level of disruption at 34 percent, the academic performance of the students was below 50 percent.

Academic performance is characterized by the performance of the students on the quizzes, and tests conducted during the course.

The behavior or the attitude of the students is depicted in the way they conduct themselves in class.

The more actively they participated the more responsive they are to the teacher depicts a highly attentive student while those who are silent and reserved in the class, entering in little discussions are depicted to be less attentive. The relation of the theory for this research is that the attention level of the students during class attributed by their behavior is an indicator of their academic performance with high attentiveness yielding high level of performance.

Akey provides that the behavior and the attitudes of the students in the school context effect academic achievement. His research depicted that “both prior student engagement and perceived academic competence had a significant positive influence on subsequent levels of math achievement, but the influence of perceived academic competence was three times larger than that of engagement.” (Akey, 2006)

The subjects of the study would be high school students aged between 16 to18 years of age belonging to both male and female gender. The procedure/ methodology of the study would involve conducting a normal course session of one hour between the teacher and the students where the behavior of the selected students enrolled in the course would be observed to determine their attentiveness.

The next day for the same course a multiple choice test/ quiz with 20 questions would be conducted by the teacher. The academic performance of the students would be determined based on their results on the motioned quiz/test.

On the other hand 3 students who had paid attention in the observed class also failed to achieve a score of more than 65 percent in the quiz. The results of the study undertaken and the conducted research have failed to negate the hypothesis set that In any class 50 percent of the students would depict low performance due to lack of attention paid during class. The research therefore highlights that attentive behavior on part of the students directly affects their academic performance level. Further research can be undertaken pertaining to the role of teacher sand instructors in inducing participation from students.

The problem statement regarding behavioral change being targeted is that the behavior of the instructor can also have an effect on the response behavior of the students depicted in a class room environment. The teaching style adopted by an instructor, the interaction opportunity provided by the teacher and the open floor for discussion created by them can influence learning in the students. A research undertaken by Hackman and Walker (1990) highlights how the an interactive class atmosphere where the teacher smiles at the children, encourages them to get involved in discussions, raise queries and makes way for more effective learning amongst the students.

It has already been identified that the attention characteristic of the human behavior depicted by students can directly affect their performance level in class, where test and quiz results are concerned. The same can also stand true role played by the teacher, whereby the teaching style of the instructor can encourage or discourage participation for students in the class. The learning in the students is emphasized with the increase in their own class room behavior with increased attentiveness and participation.

The participation however can be controlled by the teacher/ instructor as well who can manage the level of participation by their own behavior. Where a teacher depicts an open behavior with active discussions being provoked in class and question and answer sessions where the students are invited to bring their own point of view in a casual manner by the teacher can also garner increased learning in the students. Bonwel and Eison present in their work that active learning can be initiated by instructors by including various elements of interactivity.

These include “(1) the feedback lecture, which consists of two minilectures separated by a small-group study session built around a study guide, and (2) the guided lecture, in which students listen to a 20- to 30-minute presentation without taking notes, followed by their writing for five minutes what they remember and spending the remainder of the class period in small groups clarifying and elaborating the material.” (Bonwel and Eison, 1991)

On the other hand a highly disciplined class room where no interaction is where the students are not allowed to carry out any sort of discussions, and are repressed to maintain restricted decorum. The hypothesis therefore stands that in any class 70 percent of the students would depict high performance due to high level of interaction in the class initiated by the casual and open behavior of the teacher.

The procedure for the research is such that the teacher/ instructor would be more interactive in the class, inviting the students to join in class discussions, while depicting a jovial and humorous attitude in class with a smile. The subjects of the study would be high school students aged between 16 to18 years of age belonging to both male and female gender.

Therefore the hypothesis that in any class 70 percent of the students would depict high performance due to high level of interaction in the class initiated by the casual and open behavior of the teacher stands true as shown by the results. . The results of the study undertaken and the conducted research have failed to negate the set hypothesis. As a result the research provides that effort should be made by instructors to engage the students in discussions and encourage a more participative environment in class in order to ensure retention and learning in students. 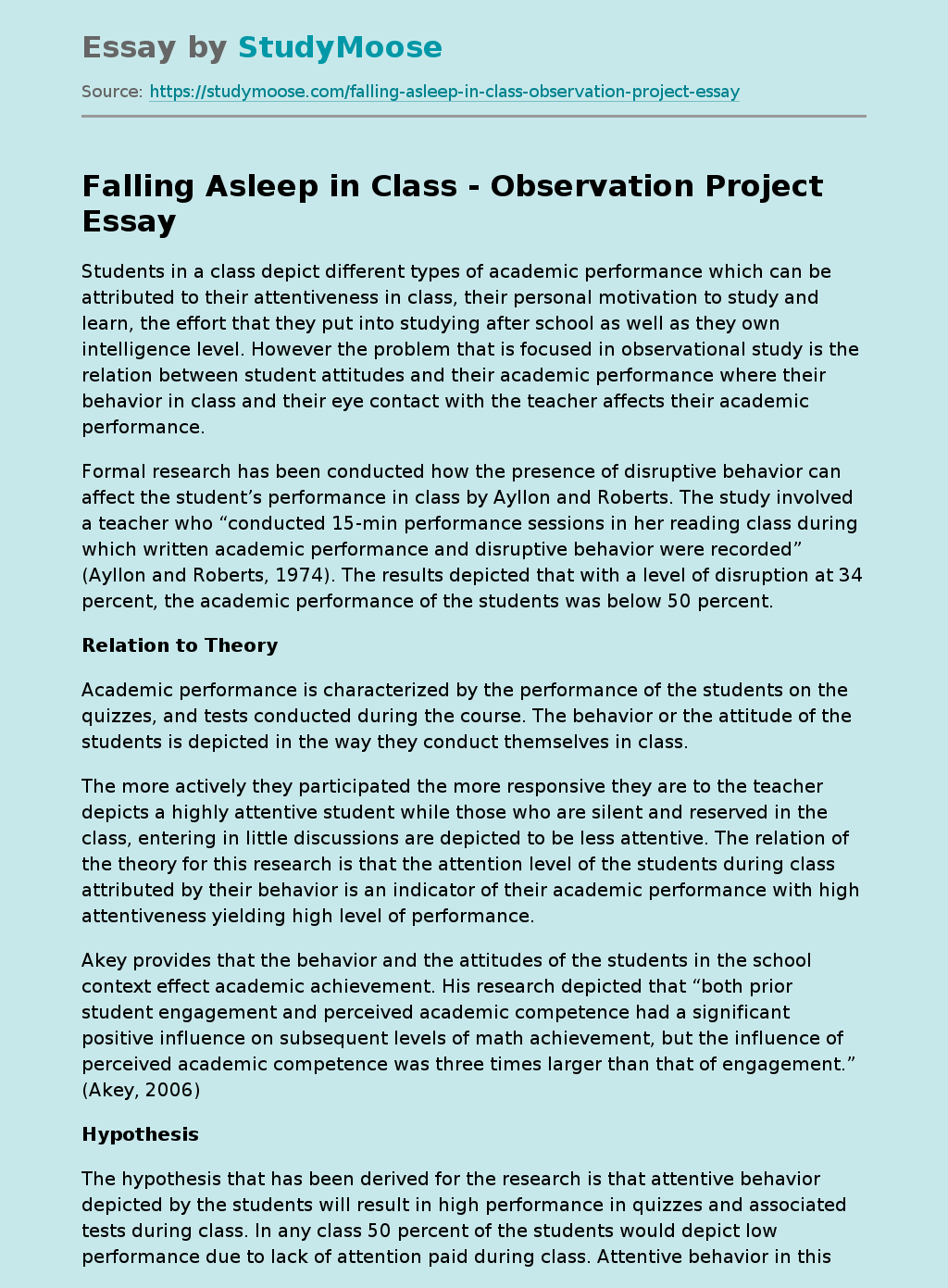