A Stitch In Time Saves Nine

There is no doubt that a stitch in time saves nine. It means that man must do something at the very early stage. This proverb in its literal sense applies to holes in our clothes which may be easily mended at first, but, if they are left unmanned, grow bigger and bigger, until they cannot be repaired without a great deal of sewing. What is true of torn clothes is true of boots, boxes, houses, ships, walls, bridges, in a word, of everything that needs mending, I may quote a striking illustration of the truth of the proverb from my own observation.

Don't use plagiarized sources. Get your custom essay on
“ A Stitch In Time Saves Nine ”
Get custom paper
NEW! smart matching with writer

A beautiful pier was built at great expense by Government many years ago on the stormy west coast of Scotland, to defend the harbor of a fishing village. The great stone of which it was composed were bound together by clamps of iron, and it looked as if it could defy the utmost fury of the waves. Nevertheless, in one of the violent storms that visit that iron bound coast, as little damage was done to the most exposed part of the structure.

When I first saw the pier there was to be seen in it only a hole of moderate extent, that could have been repaired without much labor. But somehow the breach was left untended, and naturally grew bigger year by year until, on the occasion of my last visit to the town, half of the pier had sunk in ruin under the waves, and it was evident that to repair it would cost as much as the building of a new pier.

The expediency of the stitch in time is exemplified not only by the destruction of material fabrics, the rents in which are neglected, but also in medicine, politics, and in intellectual and moral education. How often has a doctor to tell his patient that, if he had been consulted earlier he might have affected an easy cure, but that now more drastic remedies must be employed.

A literary man, for instance, suffers from indigestion due to overwork and wasn’t of exercise. A short holiday in the country might restore him to good health if only he took it in time. But he has important work to do and is averse to taking any rest before he has finished it. So he goes on working until the symptoms become so threatening that he finds himself compelled to consult a doctor. To his surprise he finds that entire change of diet and absolute idleness for a long period of time are now needed to cure a disease, the progress of which might have been arrested with every little trouble at an earlier stage. It is the same with the body politic.

The best politicians see in good time evils which, if allowed to go on unchecked, will swell to alarming dimensions. Thus the just discontent felt by the people of France on account of the privileges enjoyed by the clergy and nobles might have been appeased by remedial legislation, but, as the cure was delayed, the feeling of disaffection went on gathering force, until at last it could no longer be extinguished and produced the horrors of the French Revolution. That no revolution has taken place in England for the last two hundred years is due to the fact that English politicians have been willing to anticipate rebellion by timely reforms. The same is true in our daily life. If anything is done at the very early stage, much energy can be saved for the same purpose.

A Stitch In Time Saves Nine. (2016, Aug 15). Retrieved from https://studymoose.com/a-stitch-in-time-saves-nine-essay 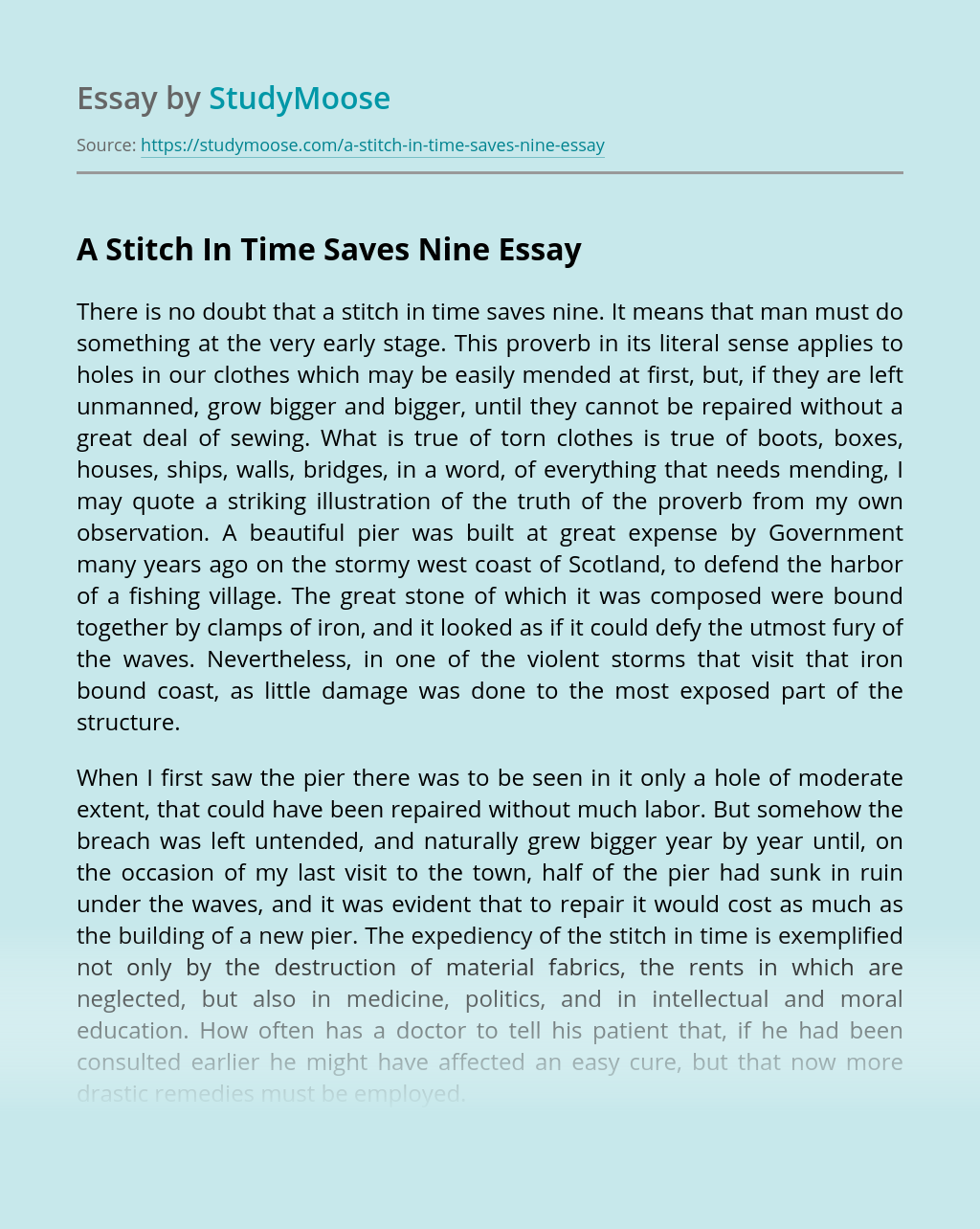