Wisdom is a difficult thing to define and understand. It’s easily recognized when people have experienced it. Wisdom is a tricky thing to obtain. Wisdom is the quality of having experience, knowledge, and good judgment.

People are oftentimes frustrated whenever they encounter roadblocks in whatever they do. Sometimes these hindrances push us to our very limits—physical, mental and emotional—that our body and mind tend to succumb to the weight of the challenge. Eventually, we may experience painful situations; the feeling of frustration is amplified many times causing us to relinquish the challenge, retreat and fall back never to do the same thing again.

Don't use plagiarized sources. Get your custom essay on
“ Gaining Wisdom Through Suffering ”
Get custom paper
NEW! smart matching with writer

Yet the one rewarding gem of thought behind all these is that painful experiences can sometimes teach a valuable lesson in life.

The idea is simple: more experiences mean more knowledge, and more knowledge means lessons learned, thereby making us more complete as human beings. The opposite of that idea holds compelling just as well, knowing how individuals with less exposure to the outside world and to the various challenges that lay ahead of them stand below the rest of those who have been seasoned and primed by the difficulties in life.

Some lessons can be learned from the story of King Lear and Tuesdays with Morrie.

Through suffering King Lear and Morrie obtained wisdom. ?At the beginning of the play, Lear was a selfish man.

Power was very important to him. Suffering turned Lear from a selfish man wanted to be treated as a king without having the responsibilities that come with running a kingdom, to a man that comes to realize his morals and values. Lear gave away his kingdom to Gonerial and Regan but still wanted the same status and power of king. Lear gained wisdom through his mistakes of banishing his youngest daughter, Cordelia. Lear comes to the realization of his foolishness in act three. For instance, “Let thunder rumble! Let lightning spit fire!

The rain, the wind, the thunder and lightning are not my daughters. Nature, I don’t accuse your weather of unkindness. I never gave a kingdom or raised you as my child, and you don’t owe me any obedience. ” Here King Lear is coming to terms of his mistake of giving away his kingdom to the wrong people. He then goes on “So go ahead and have your terrifying fun. Here I am, your slave a poor, sick, weak, hated, old man. But I can still accuse you of kowtowing, taking my daughter’s side, against me, ancient as I am.

Oh, it’s foul! In this scene Lear is in the storm with Kent and the fool. In this act the king is turning from an arrogant man to a noble man. It takes king Lear a complete breakdown to realize his mistake. ?Next, Lear gained wisdom through insanity and the cruelness of his to eldest daughters. For example, his eldest daughter Gonerial humiliates his loyal messenger Kent. Lear is telling kent his own flesh and blood would never commit such an act. “They durst not do’t. They could not, would not do’t. ‘Tis worse than murder to do upon respect such violent outrage.

Resolve me with all modest haste which way thou mightst deserve or they impose this usage, coming from us. ” (II iv 16-20). In this scene Kent was telling the king how his own daughter betrayed him. Lear is astonished that they would want to humiliate him and is realizing he is losing his status as king. ?Morrie also gains wisdom through suffering. In addition, Morrie was wise from the start but through his sickness he gained more wisdom. Morrie says to Mitch, “Truth is Mitch, once you learn how to die, you learn how to live. (Albom 82).

Morrie learned to accept his sickness and that he is going to die. Once he learned to accept it he was able to live. He lives his life to the fullest he realized little things that you should be taking advantage of. Morrie used aphorisms to say how he lived his life. One of the aphorisms he told Mitch was, “Accept what you are able to do and what you are not able to do. ” (Albom 18). You forget about everything that doesn’t matter and you just learn how to live life.

His illness helped him to gain wisdom and to live life the fullest. ? Lastly, Morrie embraces his life. In order to gain wisdom one must experience suffering. Morries suffering from ALS caused him to grow weaker physically; however, it made him a stronger person mentally and emotionally. Furthermore, Morrie says, “Don’t assume it’s too late to get involved. ” (Albom 18). This quote shows us that even though Morrie had a sickness taking his life away, he still made a difference for other people. He didn’t lie around pitying himself.

Morrie embraced his life rather than fearing life. By way of example, Morries tells Mitch, “Mitch, I embrace aging” (Albom 118). This means he isn’t afraid of growing old, he embraces the years of life he has left. In conclusion, despite being very different in both characters and beliefs, both King Lear and Morrie acquire wisdom through suffering. Wisdom is comes when someone experiences it. Wisdom is the quality of having good judgement, knowledge, and having experienced hardships. Wisdom is hard to understand.

Other examples may include the stories of athletes and business people.

Athletes in the various sports are constantly exposed to the risks of physical and mental exhaustion which, more often than not, brings painful experiences. Throughout time, many athletes have suffered from painful physical experiences and yet they have not given up completely. On the contrary, they are more motivated than before to pursue their field of specialty precisely because those painful experiences were forks on the road, so to speak. Painful experiences, apparently, are nothing short of being normal in the daily life of the athletes.

On the other hand, even non-athletes such as the exceptional business entrepreneurs have also reached the high pedestals of the industry even with the seemingly insurmountable experiences that stood against their way. Conventional wisdom tells us that all businesses have their own risks, which goes without saying that businessmen are sure enough to face risky situations. Those risky situations, such as capitalizing huge financial resources on a business venture that is not yet proven and tested, bring painful experiences just as well.

The process of critically thinking over the odds and the steps to be taken are mentally ‘painful’. But even though these painful mental and even emotional experiences which try to pull down the businessmen are sources of golden lessons that only a few are able to triumph over in the end. That is because those who have experienced the pains of doing business already have the upper hand in terms of crucial business lessons. They are already aware of the presence of those painful experiences and of the ways to surmount them.

Even the average individual can gain the vital lessons from everyday experiences that are painful. Losing a loved one, failing in school, losing a job, suffering from a crippling disease—all of these things can be sources of priceless lessons if only one has the determination and will to surpass them and the foresight to visualize the treasure trove of lessons that await them at the end of these dark times. The point is that people should not see painful experiences as the end of all the things that they have worked very hard on, or the end of their lives. 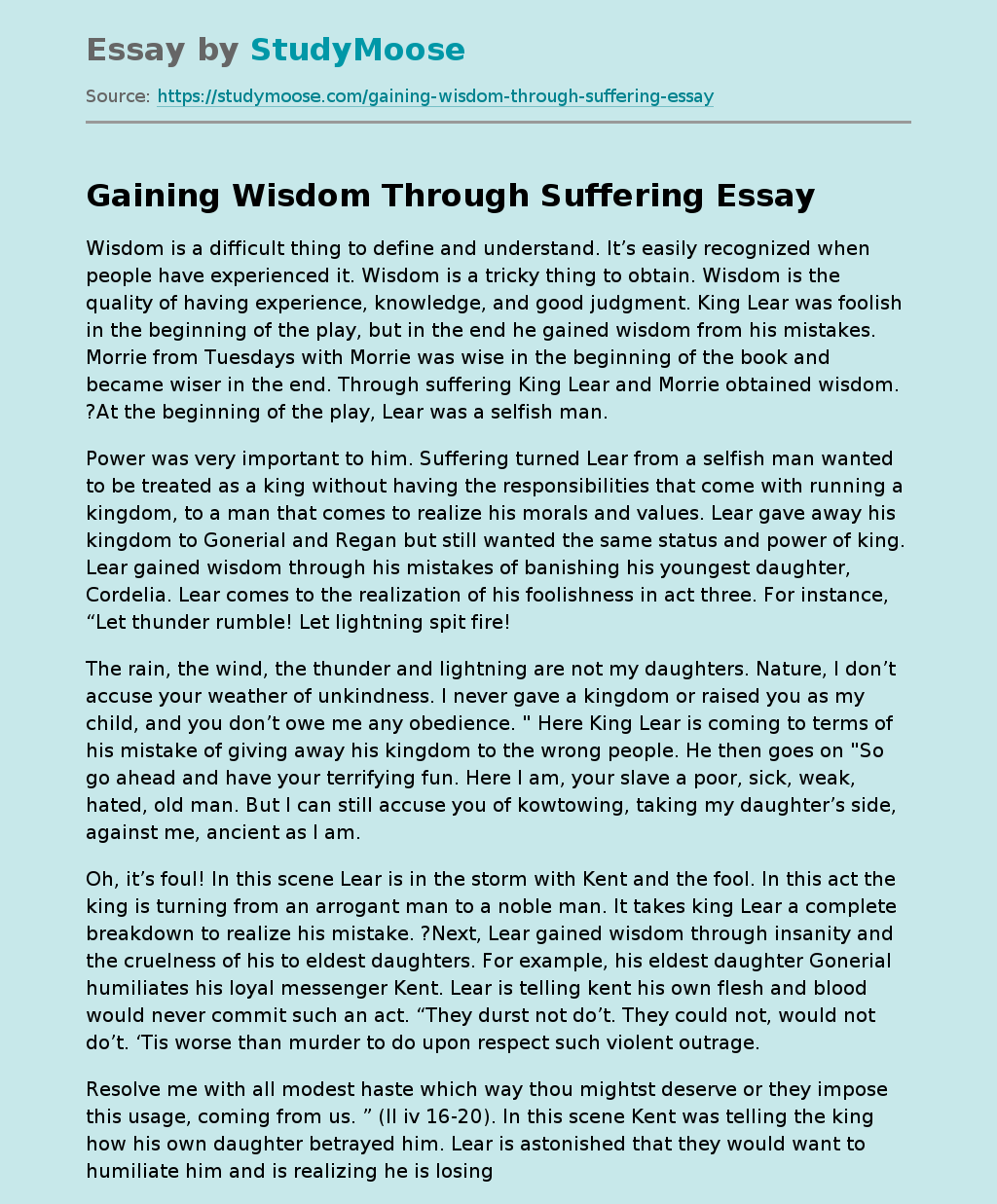