Nihilism and Existentialism in Grendel

Nihilism, as well as existentialism and a host of other philosophies are boldly explored in Grendel, a novel by John Gardner. The antagonist Grendel travels on a journey of self-discovery, eventually becoming a nihilist, only to be gallantly disproved by the hero Beowulf. In the end Gardner proves that the virtues of individuality and meaning triumph over meaningless violence and destruction. While Gardner presents countless philosophies and thoughts in Grendel, the two most prominent are nihilism and existentialism. The monster Grendel begins life as an existentialist.

Don't use plagiarized sources. Get your custom essay on
“ Nihilism and Existentialism in Grendel ”
Get custom paper
NEW! smart matching with writer

After leaving his mother’s cave, he is introduced to a vast, confusing world. As a defense against the rest of the universe, Grendel establishes existentialism as his philosophy. Grendel is initially confused about the things around him, but soon encounters humans, creatures who seem to share a common language and thought. He tries to decipher meaning out of the humans by watching them. Grendel witnesses the early evolution of Hrothgar’s kingdom, watching them “season after season … from the high cliff wall” (37) conquering each other and other kingdoms, quickly expanding into a powerful empire.

In Chapter 5, Grendel falls in the lair of the Dragon. Through his conversation with the Dragon, Grendel is introduced to nihilism. The Dragon it seems, is the ultimate nihilistic entity who knows “the beginning, the present, the end . all time, all space. ” (62, 63) The Dragon believes that all things in the universe will come to an end and are therefore meaningless and discounts existentialism as a philosophy. His final advice to Grendel is to “seek out gold and sit on it” (74) if for no sake other then doing it.

Grendel leaves the Dragon’s lair with a renewed confidence in himself. Believing the Dragon’s words to be true, Grendel finds no reason to restrain his inherently destructive desires. Grendel proceeds as a terrible monster, fulfilling all of his evil fantasies. Grendel’s new found nihilism however, is quickly invalidated by the hero Beowulf, who comes to Hrothgar’s kingdom after hearing of their trouble with Grendel. The coming of Beowulf is the ultimate abomination of nihilism. While Grendel represents meaningless death and destruction, Beowulf represents regeneration and goodness.

While the Dragon instilled in Grendel that all things are meaningless, Beowulf teaches Grendel that “where the water was rigid there will be fish” and “the world will burn green, sperm build again. ” (170) Thus, Gardner discounts both nihilism and existentialism to be detrimental. Gardner then goes on to describe the evolutionary path of both Grendel and Hrothgar’s Thanes. From the vantage point of his cliff, Grendel watches the pattern of destruction inflicted by Hrothgar and his men upon other kingdoms as they expand their power and influence.

Grendel witnesses “on a soft summer night, as many as three [mead] halls burning at once. ” (37) “Instead of making war on them, [Hrothgar] sent men to them every three months or so, with heavy wagons and back-slings, to gather their tribute to his greatness. ” (37) This expansion of power makes Hrothgar into a great king. However, before the days of their greatness, Hrothgar had begun “hardly stronger than the others, began to outstrip the rest. He’d shown them the strength of his organization. ” (37) His seemingly great abilities as king however, are not the only factors that contribute to Hrothgar’s great reputation.

In Chapter 4, the shaper arrives at Hrothgar’s mead hall. Unlike other poets, the shaper is able to sing of a false past so gloriously as to have it be true. By doing this, he encourages the Thanes to live-up to their false glory. Some may say that shaper is solely responsible for the advancement of the Thanes into the great kingdom. By Chapter 4, even Grendel is convinced that the lies the shaper sings of are true. This is evident when he says “I knew them, had watched them; yet the things he said seemed true.

” (47) The shaper embodies the summit of the Thane’s greatness. His death later brings great sadness throughout the kingdom. “The people listen silent and solemn to the old shaper’s song on the young man’s lips. ” (147)Without the shaper to sing lies of his greatness, Hrothgar is no longer a great king. The Thanes have already conquered as much as they can, and the kingdom is now in a state of maintaining its power. Overall sadness at the death of the shaper, lack of motivation and threats upon the thrown drive the kingdom into a period of decline.

Hrothgar is no longer the proactive young king he used to be. Instead, “puffy-eyed, he gets up, and in a kind of stupor goes to the meadhall to piss. ” (136) In all of this Grendel’s bad-faith is the target of Gardners polemic. Even if Grendel is the offspring of Cain, he continually reminds himself (not unlike the shaper) that he is free to change his behavior. But then again, he asks himself, why should he? On what grounds? So he knowingly denies his potential to choose moral behavior and continues to believe the fiction that he’s a meaningless object.

His nihilistic revelations about the indifference of the universe and the relativity of values are nothing more than a feeble attempt to justify his role as a murderer. These ironic lines merely affirm the existence of the universe for-itself. When the forest echoes “why not? ” (in other words, why not be good? ), he hears his own repressed self. All in all, Grendel the existentialist monster is a brilliant vehicle for Gardner’s dissection of the loopholes in Sartre’s definition of consciousness as nothingness.

Nihilism and Existentialism in Grendel. (2016, Nov 09). Retrieved from http://studymoose.com/nihilism-and-existentialism-in-grendel-essay 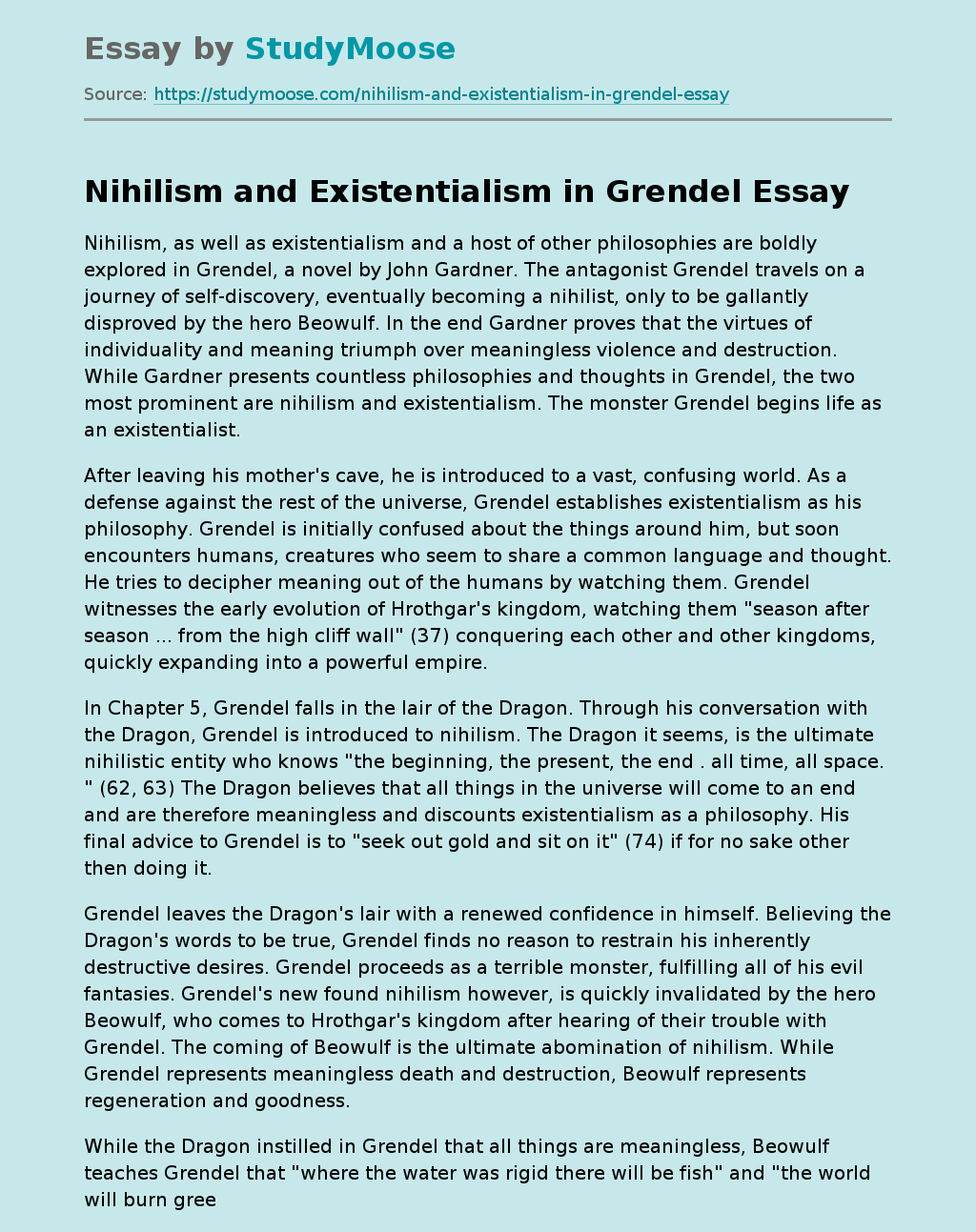