Themes of Nihilism in Crime and Punishment

Nihilism is one of the most difficult philosophies to accurately define because of its ambiguous nature. In its simplest form, one might consider it an extremely pessimistic form of skepticism in which the individual discounts even the idea of existence. Therefore, to a nihilist, all values, relationships, authority, beliefs, and emotions are baseless and empty. First popularized in Ivan Turgenev’s Fathers and Sons in 1862, nihilism is associated with a revolutionary movement that occurred in Russia from 1814 to 1876. The principles of nihilism often can be linked with those of utilitarianism, existentialism, and anarchism.

Don't use plagiarized sources. Get your custom essay on
“ Themes of Nihilism in Crime and Punishment ”
Get custom paper
NEW! smart matching with writer

Dostoevsky demonstrates his aversion to this philosophy through Raskolnikov’s mental deterioration and eventual return to more traditional values after murdering the pawnbroker (an action that was caused and justified with nihilist principles).

Raskolnikov’s self-imposed isolation represents one of the main principles of nihilism, the idea that nothing truly exists causes relationships of any kind to seem futile and meaningless. Because of this, Raskolnikov avoids human interaction of any kind as much as possible.

Proficient in: Crime And Punishment

His exile from the rest of society only serves to perpetuate his nihilistic tendencies, as he is able to distance himself from all other humans mentally as well as physically. This results in his adoption of Nietzsche’s concept of the “superman”, an inherently nihilistic idea that separates humanity into the weak (the majority) and the strong (the minority). Raskolnikov characterizes himself as a superman, above the laws of his society. In this way he is able to justify his murder of Alyona Ivanovna, which gives him confidence in his capacity to commit the crime without error or remorse.

He considers himself an intellectual, capable of higher thought processes than the rest of the world, which in turn gives him a boosted ego and a superiority complex.

Raskolnikov is also able to validate the murder for himself through utilitarianism, a philosophy closely related with nihilism. Believing that killing the pawnbroker would result in greater happiness for a greater number, he exemplifies utilitarian ideas by placing himself in a position of judgment, and therefore a position above the rest of society. Throughout the story we are shown that he is not above the emotions and guilt that are the basic human reactions to an action as extreme as murder. His downfall comes because of this very fact, as he mentally and physically deteriorates under the stress of his culpability. His arrogance is proven to be the unfounded and foolhardy ideas of one who is truly a deeply insecure and unstable person (though Raskolnikov never truly realizes this).

Through Raskolnikov’s exemplification of the impracticality of this principle, Dostoevsky makes his greatest point in Crime and Punishment. His commentary on the subject seeks to discredit the theory in the circumstance of an individual “superman” by displaying Raskolnikov as a character who is difficult for readers to identify with because of his inanity. Even Raskolnikov’s name is a symbol of nihilistic ideas, the word “raskol” meaning schism in Russian, illustrating the shift from an older school of thought (social utopianism) to a darker philosophy: nihilism and utilitarianism.

Raskolnikov seems to fluctuate back and forth between the two philosophies, acting on one and then mentally chastising himself for it, immediately and almost erratically changing his mind. This symbolizes the more human side of him struggling to get through, for instance, when he leaves money for the Marmeladovs and instantly regrets the decision, stating “What a stupid thing I’ve done.” His change of mind demonstrates his nihilistic tendencies overcoming his attempt at compassion. Ultimately Dostoevsky uses Raskolnikov to disprove this new school of thought by implying his eventual return to more humane principles in the epilogue of the story, after he finds love in Sonya.

Themes of Nihilism in Crime and Punishment. (2016, Dec 27). Retrieved from http://studymoose.com/themes-of-nihilism-in-crime-and-punishment-essay 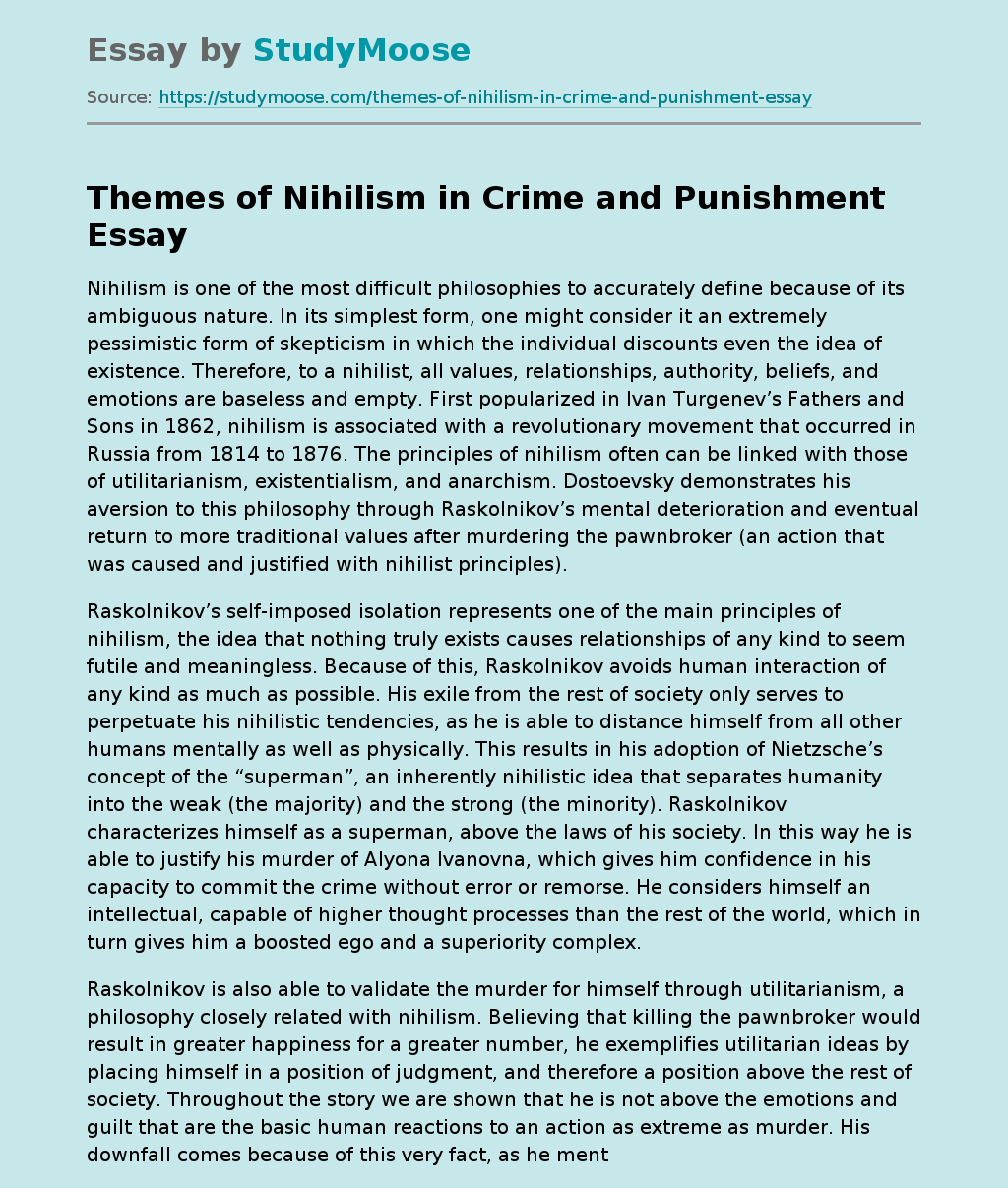