Nightmare and night terrors are two sleep disorders children suffer from in early childhood and beyond. They are more prevalent in preschool age children but, can manifest during the toddler years. Studies have shown that rapid eye movement, or REM sleep as it is better known, is the cycle of sleep where most dreams take place (Ciccarelli White, 2017).

Don't use plagiarized sources. Get your custom essay on
“ Nightmares and Night Terrors ”
Get custom paper
NEW! smart matching with writer

For a stressed out or anxious child, it is during REM sleep that these bad dreams develop.

Night terrors on the other hand, is a rare disorder that occurs during the Non-REM sleep cycle, also known as the slow-wave sleep cycle (Ciccarelli White, 2017). This disorder is characterized by intense fear that accompanies a frightening vocalization, most often a scream, running during deep sleep, sweating, and a racing pulse (Cline, 2015).

There are many theories and ongoing research as to why these two phenomena happen to children and adults alike. In this paper, we will explore the history of nightmares, and the more exceptional night terror.

We will examine the effects of nightmares and night terrors upon children, their similarities and differences, as well as what the medical and scientific community have to say about both disorders.

The origin of the word “nightmare” dates back to 1250-1300 during the middle ages (Neufeldt, 1997). The original meaning according to Webster’s dictionary was, “an evil spirit believed to haunt and suffocate sleeping people” (Neufeldt, 1997, p. 916). Awakening from a terrifying dream unable to breathe gives this word life and meaning. The association between nightmares and breathlessness found its explanation in a spirit who manifests in female form and who is depicted as ethereal in nature with uncanny strength.

She is a portrayed in Fritz Schwimbeck’s 1915 painting as half woman, half bird succubus that can suffocate a sleeping man with her upper body strength soley. The old norse and anglo-saxon term, Mara was a spirit that sat on the chest of a person sleeping, thus causing bad dreams (Ashliman, 2005). Mara, mare, or mere, depending on certain european regions and cultures, all have roots in folklore dating back to the reconstructed proto-indo-european root mer meaning to “rub away” or “to harm”. The word “mare” is as old as civilization itself.

Dreams have held a prominent position throughout the world, touching every culture and religion throughout history. The nightmare, the sinister twin flame, has made humanity miserable with her dreadful and unsolicited visits. She has no regard for age nor youth, recognizes no boundary of time or culture. The sophisticated and unsophisticated are not immune to its anxiety producing effects. Just like the dream, the nightmare is a universal and involuntary human experience.

Nightmares often involve “some threat of death, injury, or annihilation that you’re trying to escape” says Tore Nielsen, a professor of psychiatry at the University of Montreal (Heid, 2018). Children’s nightmare experiences can leave an indelible impression upon the mind. Children who remember their nightmares and can verbalize them may describe a familiar face that suddenly becomes a stranger or monster or, the “wrong face”. The psychology of abandonment is common theme in children’s nightmares.

The nightmare happens at the middle to the end of the REM sleep cycle (Schenck, 2007). The inner workings of the brain structures influence vivid dreams that are easily recalled. The size and development of of a child’s brain plays a significant role in the frequency and intensity of nightmares. The brain of a child does not reach adult size until 5 or 6 years old (Ciccarelli White, 2017) which leaves the child vulnerable to the torment of nightmares for quite some time. By then, we see a slight decrease in nightmares as the brain is better able to regulate and move through sleep cycles more effortlessly.

Night terrors are quite common in children ages 2 to 12, but may start in adulthood as well. The prevalence of night terrors up to the age of 65 is about 2 percent of the general population (Schenck, 2007). According to John Cline, clinical professor at Yale University, “prevalence rates may be as high as 6.5 percent in children” (Cline, 2015).

How long night terrors last varies from minutes to up to an hour or so. There’s also a thematic element to the behavior: fight or flight (Schenck, 2007). To escape or to fight back is a clear motivation in most night terrors. The child under the influence of a very intense night terror will act out many physical and violent reactions such as kicking, scratching, jumping out of bed and running around or they may even attach someone else already sleeping. These behaviors may be uncharacteristic of the child’s wakeful behaviors.

There are a few similarities and differences between nightmares and night terrors. As I’ve mentioned previously, nightmares tend to happen toward the middle to end of REM sleep whereas, sleep terrors happen during slow-wave sleep, typically during the first hour or so (Schenck, 2007).

It is much more common to have a nightmare than to have a night terror. There is no complexity to night terrors either. They seem to form from terrifying imagery and quite instantaneously at that, with no cohesive plot. A child who awakens from a nightmare feeling troubled by the bad dream will have no problem with orientation or recognition of family members. A child in the throes of a night terror is actually still asleep, cannot explain what happened, and hardly recognizes familiar faces or surroundings.

Additionally, psychological trauma and nightmares are closely linked. Traumatic events such as abuse, divorce, death, etc, are typical stressors that may cause a child nightmares. The nightmare may include whole scenarios of these stressors or include some detail of the event in a different scenario while night terrors follow no set scenario and are completely unpredictable (Schenck, 2007). However, night terrors can be triggered by stress in those who have a genetic predisposition.

According to the Mayo Clinic, children suffering from recurrent nightmares and night terrors are given a thorough physical examination to rule out underlying disorders. From there, a nocturnal sleep study (polysomnography) may be recommended. Sensors placed on the body will record and monitor brain waves, the oxygen level in the blood, heart rate and breathing, as well as eye and leg movements while the child sleeps. He or she may be videotaped to document behavior during sleep cycles (Mayo Clinic Staff, 2017). Typically children outgrow nightmares and night terrors, so a wait and see approach is best to limit exposing young children to unnecessary treatment and medication. Establishing a healthy and relaxing bedtime routine may be a great start to combating nightmares. The use of a night light, journaling and having a responsive caregiver are just a few ways to help a child cope with nightmares. 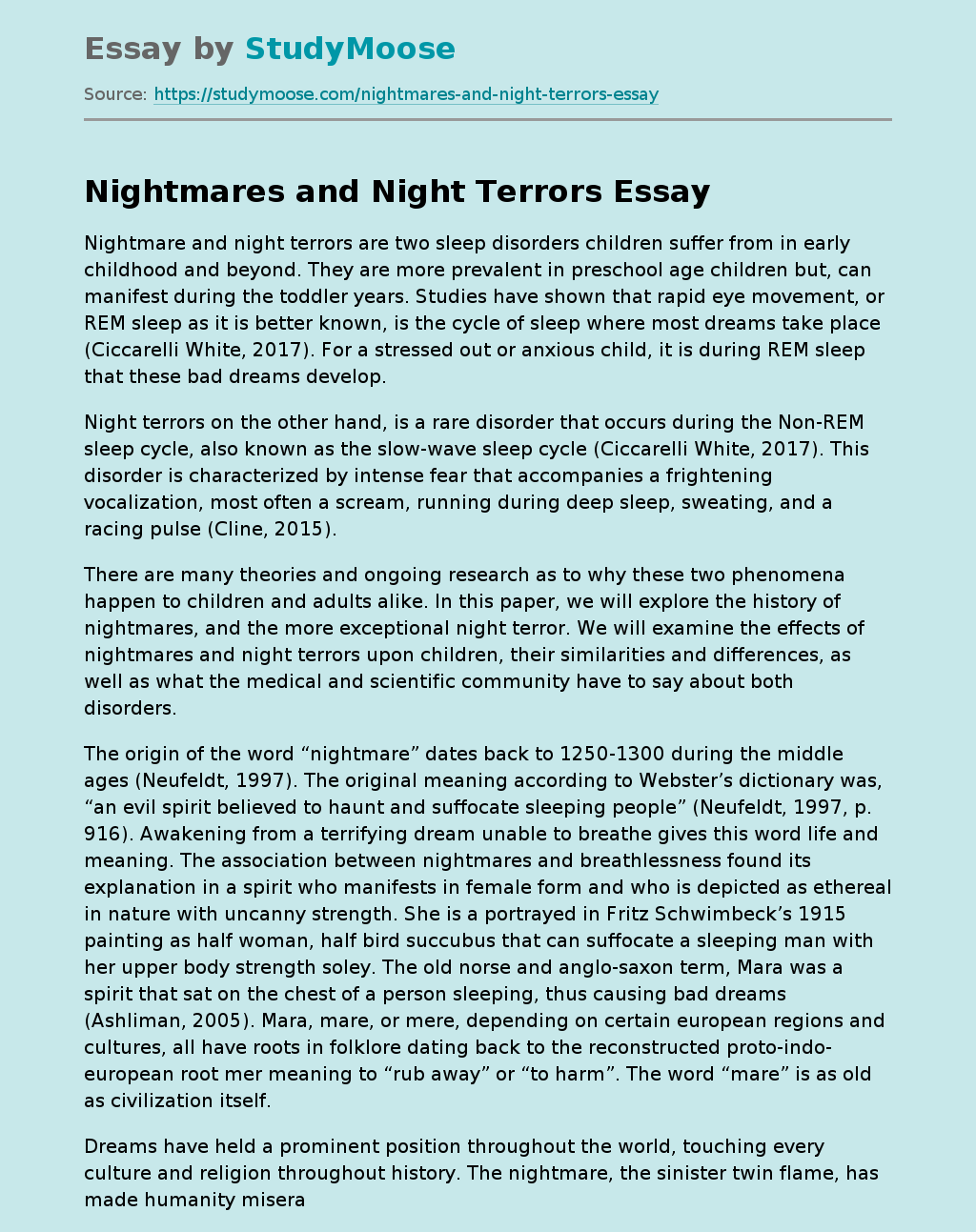