As we all know that Nepal is worldwide known as the only Hindu Nation and it is a matter of Pride to all Nepali’s living in the Country and to those too who have migrated to another Country for Business, Work and other related reasons.

I my-self being a ‘Nepali’ had to stay out of Nepal from my childhood for Better Education and better living, This is the reason i don’t know much detail about NepaliSamaj and other cultural History’s of this Great Land.

Turn in your highest-quality paper
Get a qualified writer to help you with
“ Nepal Unity in Diversity ”
Get high-quality paper
NEW! AI matching with writer

Many of us who stay in other country are called as Nepalese but when i came back home, I have learned that Nepalese are for people who stay in Nepal such as people from India are called Indians.

As my days past in Nepal i came through many people who are Nepalese but they also have a sub-caste for e.g., Magar, Tamang, Sherpa, Newar, Gurung and many such more who share equal rights.

In one line they are called as “Indigenous Nationalities” of Nepal. As per the last decade sensex came to know that Magar’s are the maximum habitants living in all over Nepal. I was happy to know this as I, myself belong to Magar sub-caste. Further to my knowing i came across places where there were churches and mosques and Gurudwara’s made and I also saw people going to these holy places to worship. At first I was astonish to find these holy places located in Nepal but then I could also figure that we are no more living in 20th Century but have widened are vision’s and respect other religions too….

After all it is a matter of individual choice whether he prefers to practice his religion by birth or he wishes to convert.

I do understand how difficult it is to except the facts but I also feel that Nepal is growing and the public awareness about respecting each other’s religion is must. The conclusion of my article ends with one line which we have already studied in our respective schools “UNITY IN DIVERSITY”. “unity without uniformity and diversity without fragmentation”[5] that shifts focus from unity based Unity in diversity (also commonly rendered as united in diversity) is a concept of on a mere tolerance of differences towards a more complex unity based on an understanding that difference enriches human interactions. “Unity in diversity” is a popular motto within and among nation states, and also in political and social movements.

The idea and related phrase is very old and dates back to ancient times in both Western and Eastern Old World cultures. The concept of unity in diversity was used “in non-Western cultures such as indigenous peoples in North America and Taoist societies in 400-500 B.C.E. In pre-modern Western culture it has been implicit in the organic conceptions of the universe that have been manifest since the ancient G physical, cultural, linguistic, social, religious, political, ideological and/or psychological reek and Roman civilizations through medieval Europe and into the Romantic era. 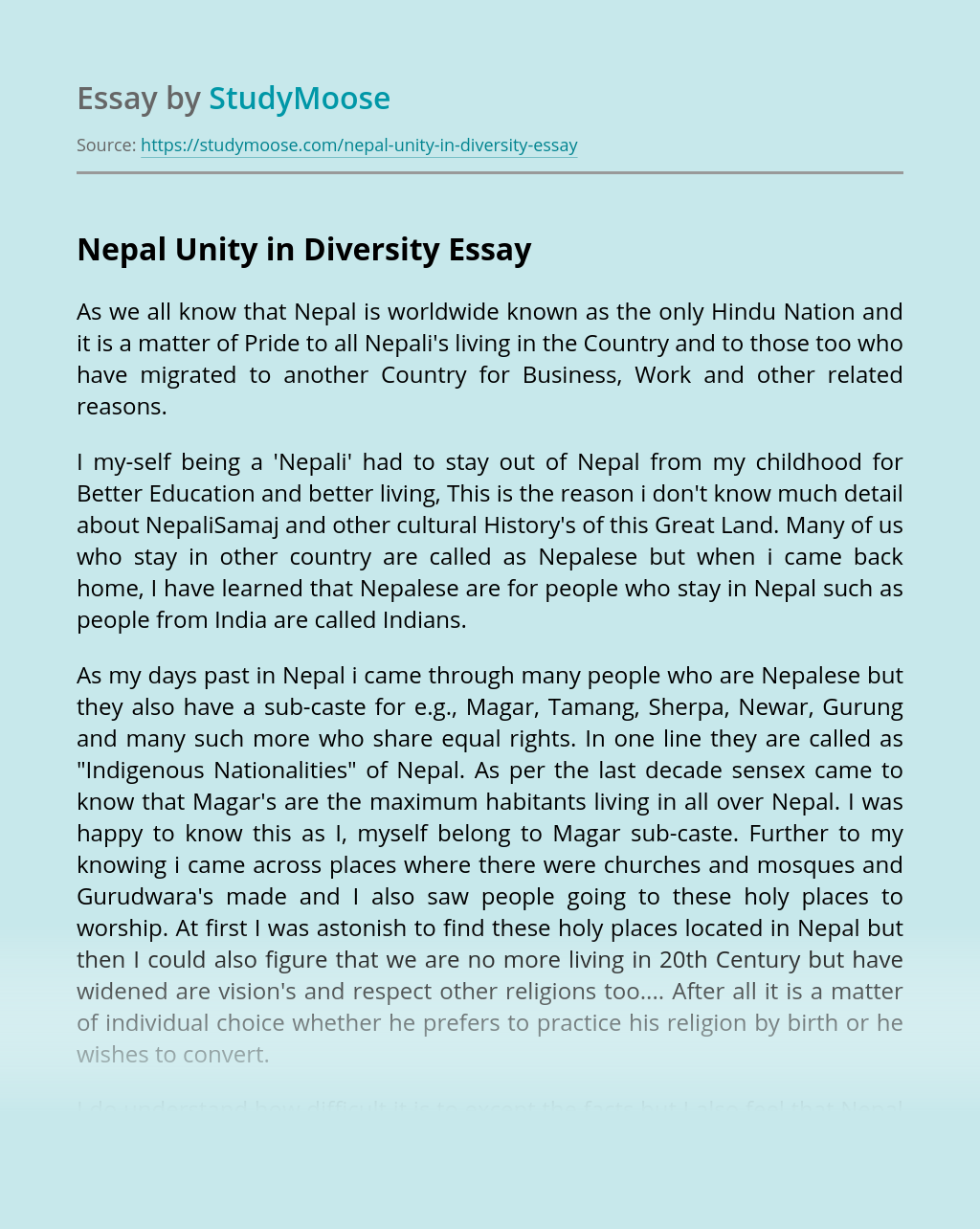 Turn in your highest-quality paper
Get a qualified writer to help you with
“ Nepal Unity in Diversity ”
Get high-quality paper
Helping students since 2015
Stay Safe, Stay Original