I am doing my report on a country by the name of Nepal. The formal name is The Kingdom of Nepal. The term for citizens is Nepalese. The capital of Nepal is Katmandu. Nepal became independent in 1768 when a number of independent hill states were unified by Prithri Narayan Shah as the Kingdom of Gorkha. The area of Nepal is 56,827 square miles. Its population according to the 1991 census was 18,462, 081. Nepal is located between China and India.

The most recent information about Nepal’s population is in the year of 1994.

Don't use plagiarized sources. Get your custom essay on
“ Nepal Essay ”
Get custom paper
NEW! smart matching with writer

It was an estimate of about 20,000,000. At this time the average family was made up of 5.9 persons, and the life expectancy was about 50 years. About 70 percent of the total population was of working age, or between the ages of fifteen and fifty-nine years of age. Nearly 44 percent of the population is in the Terai Region, 48 percent in the Mountain Region. In 1981 the capital, Katmandu , had a population of 235,160. Nepal has a constitutional monarchy government.

The multiparty democracy established along with the November 1990 constitution which replaced the panchayat system.

The education system has expanded rapidly since 1951. Right now there are elementary and high schools found in most areas of the country. Tribharan University was established in 1961 to serve as the hub of a higher education system. The literacy rate is still only an estimated fifteen percent, with most of the literate population concentrated in Katmandu Valley and in the Terai. Language In Nepal there are numerous languages spoken which is a problem because they do not belong to the same family group.

The most common and national language , Nepali, stems form the Indo-Aryan branch of the Indo European family. Nepali is spoken by 60 percent of the population. A second category of languages in Nepal is the Tibeto- Burman languages, of which the most common are Newer, Magarkura, Gurangkura, Karin and Limbuani.

Religion occupies an integral position in Nepalese life and society. The main religion in Nepal is Hinduism , but much of the population follows an unorthodox Buddhism strongly affected by mixtures of Hinduism. The fact that Hindus worship in Buddhist temples and Buddhists worship in Hindus temples has been one of the main reasons followers of the two dominate groups in Nepal have never engaged in any conflicts. Because of such dual faith practices the differences between Hindus and Buddhists have been generally in nature. In 1991 about 89.5 percent of the Nepalese people indenified themselves as Hindus. Buddhists and Muslims occupied only 5.3 and 2.7 percent. The remainder religion is Christianity. At least 87 percent of the population in every region is made of Hindus. Buddhists are mostly found in the Eastern Hills, the Katmandu Valley, and the Central Terai, in each area about 10 percent of the people were Buddhist.

The Terai region of Nepal is a low, fertile alluvial plain, in effect the northern extrusion of the Ganges plain. It is 20 miles wide at its broadest point and extends over most of the southern edge. North of this, bordering the forests of the Bhabar and Chria Hills, the Terai is marshy and malaria is endemic. A green belt of excellent timber parallels or dense elephant grass growing to a height of 15 feet.

The climate is moderate only in the mountain valleys, about 5,000 feet above sea level. The rest of Nepal is either extremely hot, as in the Terai, climate changes sharply with elevation. In the Himalayas, exposure to the sun and to rain-bearing winds produce complex patterns of local climates. Average temperatures in the Katmandu Valley range form 50 degrees in January to 78 degrees in July. Rainfall mainly occurs between June and September. The dry season is November to January.

About 90 percent of Nepal’s working force is directly engaged in agricultural pursuits. Arable land is at 30 percent of the total land area, of which 60 percent is classified as suitable for wet cultivation and 30 percent for dry cultivation. The main crops are rice, corn, millet, wheat, sugarcane, tobacco, fruits, and vegetables. Rice is grown in the Teria, Katmandu Valley , and the lower hill area. Corn and millet are the main crops at higher altitudes , which is about 6,000 feet above sea level.

Fire climate zones based on altitude range from subtropical in the South, to cool summers and severe winters in the North. The annual rainfall depends on a monsoon cycle which provides 60 to 80 percent of the total rainfall. The Eastern part of the country get the most with 2,500 millimeters. The Katmandu averages around 1,420 millimeters. And Western Nepal gets around 1,000 millimeters.

The Himalayans are what Nepal is known for. The Himalayans were formed about 60 million years ago, When the earth’s continents were still forming, a part of east Africa broke loose and began to driff slowly northward. When it rammed into Asia , the force of the collision caused the land to crumple up into a vast mountain range. More than 1,000 miles long and hundreds of miles wide. This system contains some of the highest mountains in the world. The most famous of these is Mount Everest. 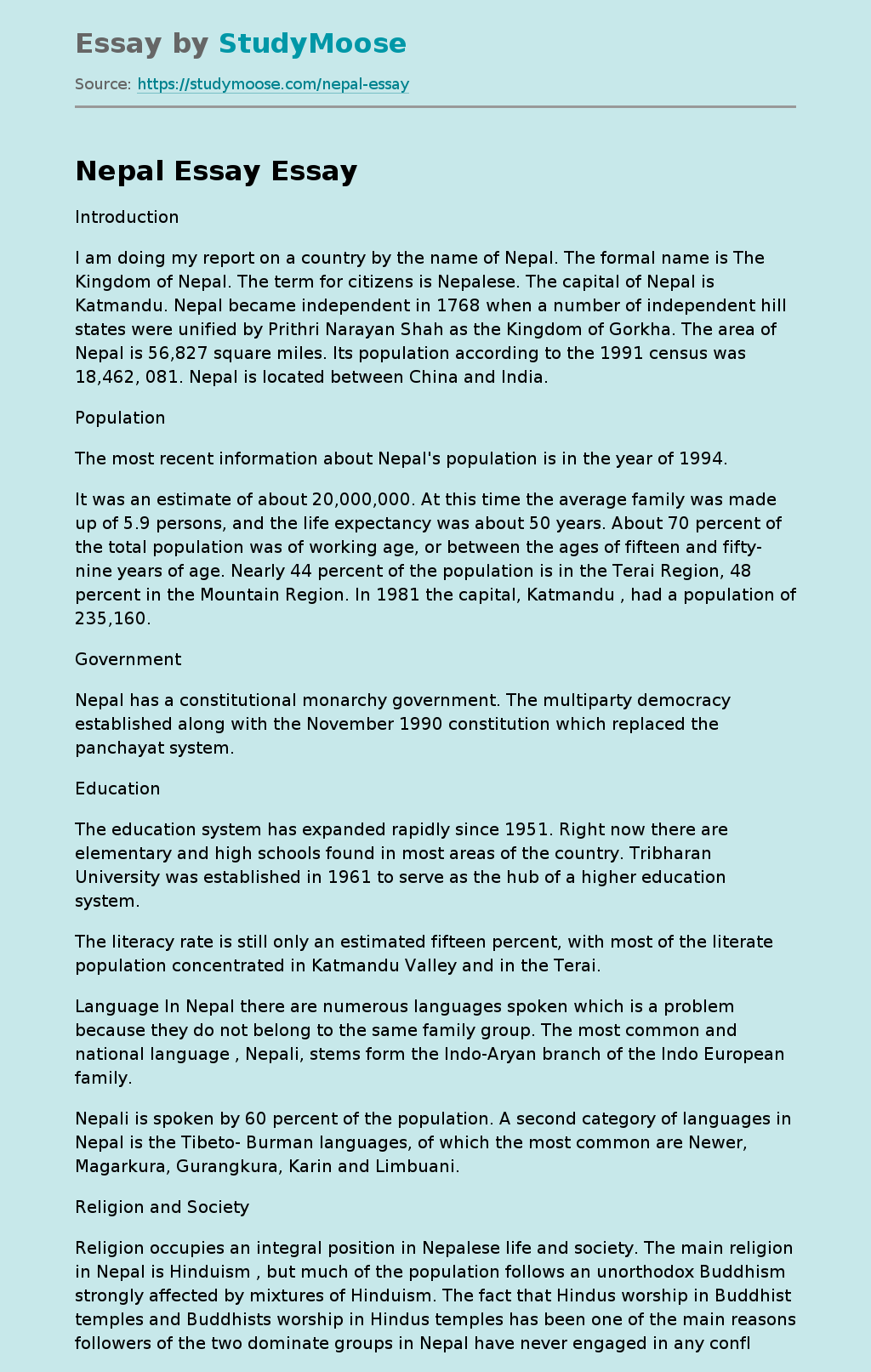