NDMP vs Alcohol and Drugs in South Africa

There are many criticisms that have occurred regarding the NDMP and the Treatment of Substance Abuse Act, one of the main criticisms of the NDMP and the Prevention and Treatment of Substance Abuse Act No 70 of 2008 is that there is policy confusion around harm reduction. Some other provinces tend to fail in implementing the programme due to lack of resources or strategy or knowledge about certain substances that are used highly and cause most effect. And basically in South Africa there are not enough programs or projects that are implemented to make the people aware of the effect.

Don't use plagiarized sources. Get your custom essay on
“ NDMP vs Alcohol and Drugs in South Africa ”
Get custom paper
NEW! smart matching with writer

Individuals in the community should be educated with regarding the effects of substance use. Some provinces do have programs but they are not finalised due to lack of clarity as to funding and the local action plans. As a result there are insufficient funding activities (Pasche and Myers, 2012:340).

The current NDMP aims to reduce the supply and demand for alcohol and illegal drugs, and it also states that the interventions that are implemented in Eldorado Park are going to help the government to implement the combined programme throughout the country (NDMP,2013-2017:35) .

It does not state what those interventions are, if they were really effective in Eldorado they should be indicated in the policy that others cities or provinces can also try those specific programmes. The NMDP is a broad policy that acknowledges that substance use problems cut across the different spheres of government and different considerations and it requires a multi-level policy approaches.

And it identifies and aims to implement holistic and cost effective strategies that can be followed and used to reduce the supply and consumption of drugs and the harms that are associated with the substance use in the country.

The NDMP strategic approach expected outcome was improved quality of life individuals, families and community through the implementation of integrated and provincial drug master plans and reports. The government should target the cause of abuse before targeting the main problems that should focus on the roots. The cause of substance abuse are unemployment, low self-esteem, and domestic violence. In this way they can see how they get to the main problem and they will have an idea of how to solve the problem. The NDMP covers the three pillars of harm reduction, demand reduction and supply reduction. However there is policy confusion around harm reduction, with law enforcement criminalising users and addicts and thereby working against the public health approach of restorative justice. The NDMP is not effectively directing implementation. Partly this is because the NDMP does not provide implementation details and it is assumed that policy and direction set at a national level will filter down to the provinces, however each provincial department defines its own strategies and produces its own legislation (NDMP,2013-2017:48).

Substance use policy is often conceptualised as falling under three broad categories which are as follows:

These concepts are or can be described as:

This can be achieved, for example, by treatment, aftercare and reintegration of substance abusers/dependents with society.The war on drug is based on the following: elimination of illicit compounds through destruction of raw materials, the interdiction of drugs being shipped in the country, legal sanctions against those who engage in the use of the substances deemed illegal by the government and treatment for those addicted to these compounds (Doweiko, 2012:505). According to the NDMP (2013-2017:50) the targeted outcomes of the NDMP are intended as:

There are not enough evidence-based programmes targeted specifically to at-risk groups and communities. High-risk groups that need more attention are people who inject drugs, prison populations, and sex workers, specifically in the light of the spread of HIV and AIDS amongst drug users. In terms of harm reduction, there has been insufficient buy-in from the Provincial Departments of Health to finance drug-related medical care, and there are insufficient skills and in-hospital facilities to confirm that harm reduction is being applied (NDMP,2013-2017:52). The results show that in terms of the continuum of care there are fewer services for early intervention and for after care. However, for prevention to be effective, early intervention services must be available and accessible, and the same applies to treatment and aftercare. For integration to work, the Departments need to work together and encourage integrated planning and shared resourcing of programmes

NDMP vs Alcohol and Drugs in South Africa. (2019, Aug 20). Retrieved from https://studymoose.com/ndmp-vs-alcohol-and-drugs-in-south-africa-essay 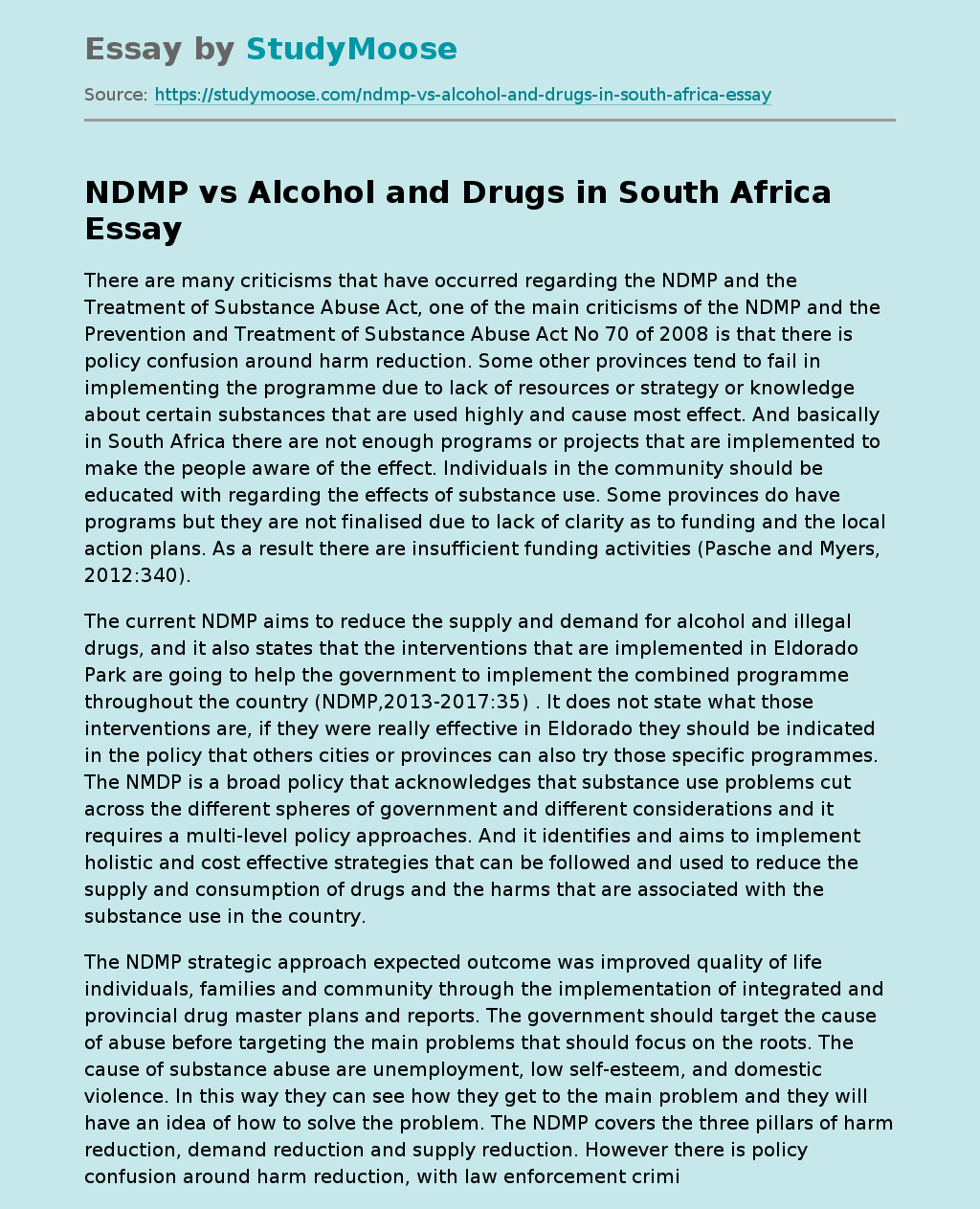