As children we often cling to the storybook romance. The “happily ever after” cliché certainly appeals to the young romantic: however, the harsh reality of life may soon prove this to be foolishly sentimental. In the novel Their Eyes Were Watching God, Zora Neale Hurston explores these circumstances as she outlines Janie’s pursuit of happiness. Janie is described as a child of nature. The spiritual power of nature has a tremendous affect on the development of her character. Hurston uses this metaphor to symbolize Janie’s eagerness to find love.

Don't use plagiarized sources. Get your custom essay on
“ Nature’s Influence on Janie’s Desire in Their Eyes Were Watching God ”
Get custom paper
NEW! smart matching with writer

Though as a child she craved a conventional romance, nature guides her to her one true love. Before meeting the man of her dreams, Janie experiences many failed relationships that highlight the changes in her desires. Throughout the novel, Janie is influenced by natural forces that alter these desires in her relationships with Johnny Taylor, Logan Killicks, and Joe Starks.

On a spring day in West Florida, Janie spent the afternoon lying under a pear tree.

The delicate serenity of nature filled her with sheer contentment and delight. In a dream like state, “through the pollinated air she saw a glorious being coming up the road” that in “her former blindness she had known as shiftless Johnny Taylor” (11). Janie’s romantic visions are reflected by springtime. At sixteen years old, Janie, herself, was blooming into a woman. In a trance, Johnny Taylor became the target of her infatuation. Nature’s power of suggestion was able to “[beglamore] his rags and her eyes” (12).

Just as Johnny Taylor kisses her, Janie’s grandmother, Nanny, wakes from her nap and catches the two under the pear tree. In desperation, Nanny has Janie married off to a wealthy farmer, Logan Killicks, and in an instant Janie’s carefree fantasies come to an end.

Logan Killicks embodies all the qualities that Janie detests. Though she cannot seem to find nature’s beauty within him, Janie agrees to marry Logan to appease her grandmother. Her naivety is made apparent when she assumes that “marriage compel[s] love” and that happiness would follow (21). Logan initially treats Janie with great care, but Nanny warns her that his display of affection would be short-lived. Janie soon becomes concerned that she will not been able to love her husband. She romanticizes marriage and longs for some kind of natural attraction. When Janie realizes that she would never love her husband her “first dream was dead, [and] so she became a woman” (25). As their marriage deteriorates, Janie notices that their relationship dynamic has changed. As Nanny predicted, Logan no longer treats her with the kind of respect that he once did. Their loveless marriage turns strained and unpleasant as Logan strips Janie of her free will, forcing her to work as a field hand. When Logan leaves town, Janie catches the attention of a passerby, Joe Starks. Joe strikes Janie as a man with ambition; his youthful energy and conviction remind Janie of her own independent nature. Joe seeks to establish an all black city in which he could voice his opinion. Their budding relationship appeals to Janie’s romantic visions of love and her thirst for adventure. When Logan returns, Janie decides to take her life into her own hands and runs off with Joe.

She hopes that “from now on until death she was going to have flower dust and springtime sprinkled over everything” however; she would soon discover that these childlike desires did not produce the love she so craved (32). Janie is initially quite taken with Joe’s physical beauty. Unlike Logan, she is proud to have him by her side. When the newly married couple arrives in Green Cove Springs, they find themselves in an underdeveloped town. Joe goes to work building a community from the ground up by purchasing two hundred acres of land, establishing the town’s first store and post office, and installing the very first lamppost. Eatonville, as Starks later named it, matures into a booming town. As the Mayor, landlord, postmaster, and storeowner, Starks adopted many responsibilities that took a toll on his marriage. In order to promote and protect his distinguished position in the community, he persuades Janie to maintain a high-class status that contrasted her free-spirited nature. Janie fears that this bureaucratic relationship would ruin their marriage. As Joe became consumed with his work, “ a feeling of coldness and fear took hold of [Janie].

She fe[els] far away from things and lonely” (46). Though he continues to provide for her, Joe discourages her desire to become a part of the town. Joe considers Janie inferior and believes she cannot think for herself. Janie resents his authoritarian manner and tries to resist however, Joe continues to suppress her independent nature. Having grown weary of the constant power struggle, Janie eventually surrenders her personal freedom and comes to realize that Joe never was the man of her dreams. Janie could no longer see the “blossomy openings dusting pollen over her man” and yearns to rediscover the passion they so desperately lacked. (72). Having grown weary from exhaustion, Joe falls sick. Renewed with purpose, Janie confronts Joe and blames him for robbing her of her freedom.

Nature’s Influence on Janie’s Desire in Their Eyes Were Watching God. (2016, Mar 19). Retrieved from https://studymoose.com/natures-influence-on-janies-desire-in-their-eyes-were-watching-god-essay 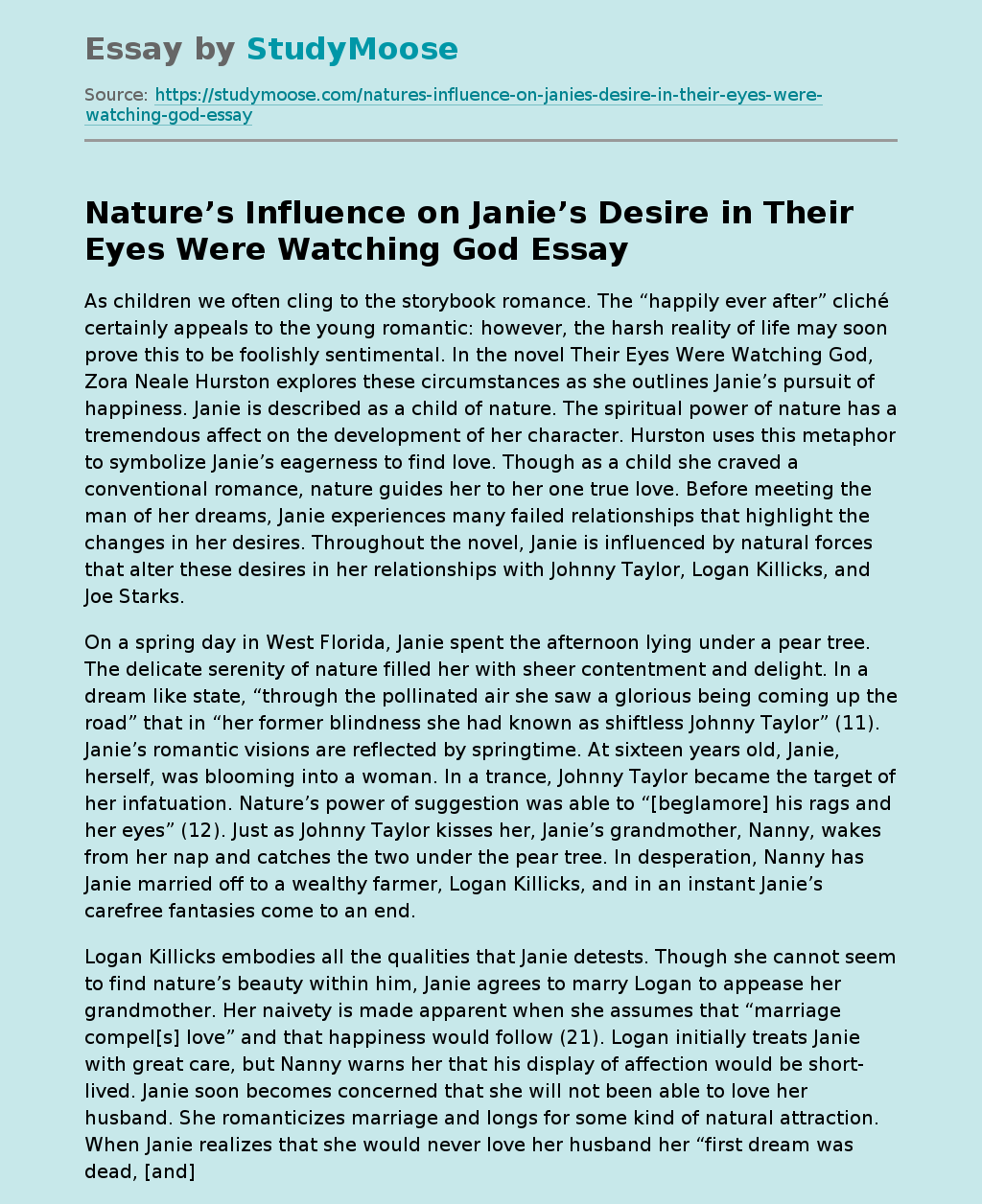