Throughout this essay I will identify “Caleb Meyer” as a rhetorical narrative, criticize its form and function, and evaluate its effectiveness. In order to criticize “Caleb Meyer” using Rowand’s method of narrative criticism, I must first establish that it meets all of the criteria of a narrative according to Sonja Foss. The first criteria Foss requires is that the artifact contain two events. The song in fact includes multiple events, but for explanative purposes we will assign those two events as Meyer drunkenly wandering into the narrator’s yard and raping her, and the narrator slicing his throat with the broken bottle.

Foss then requires that the two events in a narrative happen in a sequence of some sort, which, using the examples above, we can easily find to be true in a chronological nature. Meyer first assaults the narrator, and it is not until he does that she retaliates. Foss’s third standard for a narrative requires that the sequential events have a casual relationship.

Again, using the events above, we can easily argue that without the first event (Meyer assaulting the narrator) the second event (the narrator slicing his neck with the bottle) would not have occurred, for there would have been no reason for her to retaliate against Meyer.

The last criteria Foss requires is that the sequential, casual events be about a unified subject. All of the events that take place in the artifact, including those aforementioned, are about the interaction between Caleb Meyer and the narrator from the time he gets drunk and rapes her to the time she cuts his throat.

Now that I have satisfied Foss’s requirements for a narrative and determined “Caleb Meyer” to be such, I am able to apply Rowand’s method of narrative criticism. According to Rowand, the main components of a narrative are the characters and their roles, the setting, the plot, and the theme.

While on the surface many of these things may seem obvious to the audience, in order to discover the artifact’s rhetorical purpose it is important that we uncover more than just who, where, and why. There are two main characters in Welch’s song: the antagonist, Caleb Meyer, and the protagonist, the narrator. Caleb Meyer is established as a lonely, drunken abusive male whose purpose in the artifact is to create conflict to allow resolution (he rapes the narrator and pays the price). The narrator is a married woman whose husband has left her home alone while away on business.

Her function is to tell a story and create Welch’s message. She is established as religious (prays to God and believes in Hell [Caleb Meyer your ghost is gonna wear them rattling chains]), brave, and resilient. Meyer represents the abusive, alcoholic male figure in society, while the narrator represents women who are taken advantage of and decide to put up a fight. A secondary character, Nellie Kane, is minimally important but adds to the severity of Meyer’s actions, as he is the narrator’s husband whom Meyer knows is not around to protect her.

The setting in the narrative is a wooded area on a mountainside, although it is unspecific where exactly. Meyer asks the narrator if her husband has gone down the mountainside after emerging from where he lives “in them hollering pines. ” This setting, including the fact that the narrator’s husband has gone to Bowling Green for work, creates a picture of a helpless, isolated woman in the woods. This forces the audience to empathize with the narrator as the antagonist attacks, knowing that there is no one to aid her after being thrown down by her hair and pinned beneath a drunken man.

It is because of intrinsic humanitarian values that the audience cannot help but wish they could come to her relief, which makes the persuasiveness of Welch’s message more powerful. The plot of Welch’s song first provides that Caleb Meyer lives alone and drinks to pass the time, implying that he is an alcoholic. Lonely, he stumbles to the back of the narrator’s home and yells until she comes outside. We then hear the chorus, which consists of the narrator claiming that Meyer’s ghost will wear rattling chains, implying either that he is going to hell or that he will forever be tormented in the afterlife.

Meyer then asks the narrator where her husband has gone and if he has left her alone, to which she replies that he has indeed left on business. Meyer then grabs her by the hair and pins her hands above her head as he lay across her dress, implying that he is attempting to rape her. The narrator begins to pray and finds the bottle of whiskey that Meyer had dropped, slicing his neck open as he bleeds all over her. Welch provides a fantastic crescendo into a climax, which includes a conflict and resolution in order to keep the audience engaged.

The theme of “Caleb Meyer” stems directly from the plot. Meyer represents generic abusive, womanizing, and drunken men that sadly exist in society, while the narrator represents women who are imposed upon by them. Welch’s “Caleb Meyer” sends a message to women to be strong and independent, while it sends a message to men to mind their belligerence and forcefulness or there will be consequences, as seen in the death of Caleb Meyer. Another message that Welch may be trying to get across is that alcohol is wicked and leads to sinful behavior.

One could even go as far as saying that her message is intended to warn men of the dangers of leaving their loved one’s side, however the supporting evidence for these two arguments are insignificant in comparison to the support for the message to women to stand against abuse. Gillian Welch’s “Caleb Meyer” not only meets all of Foss’s requirements of a narrative, but also establishes itself as a powerful narrative by persuading the audience to feel hatred and anger toward the actions of Caleb Meyer. It forces the audience to identify with the narrator, and understand that what she is experiencing is wrong.

Certain audiences, women in particular, and abuse victims especially, identify greatly with Welch’s narrative because rape is the greatest fear of many women. However, men too can see the pain in the narrator’s words as Welch does a wonderful job evoking the emotions of the audience. It is because of her ability to do so that the crescendo is so effective, creating great relief when at the end of the song she sings “Then I felt his blood pour fast and hot / Around me where I laid” as the antagonist meets his rightful demise. 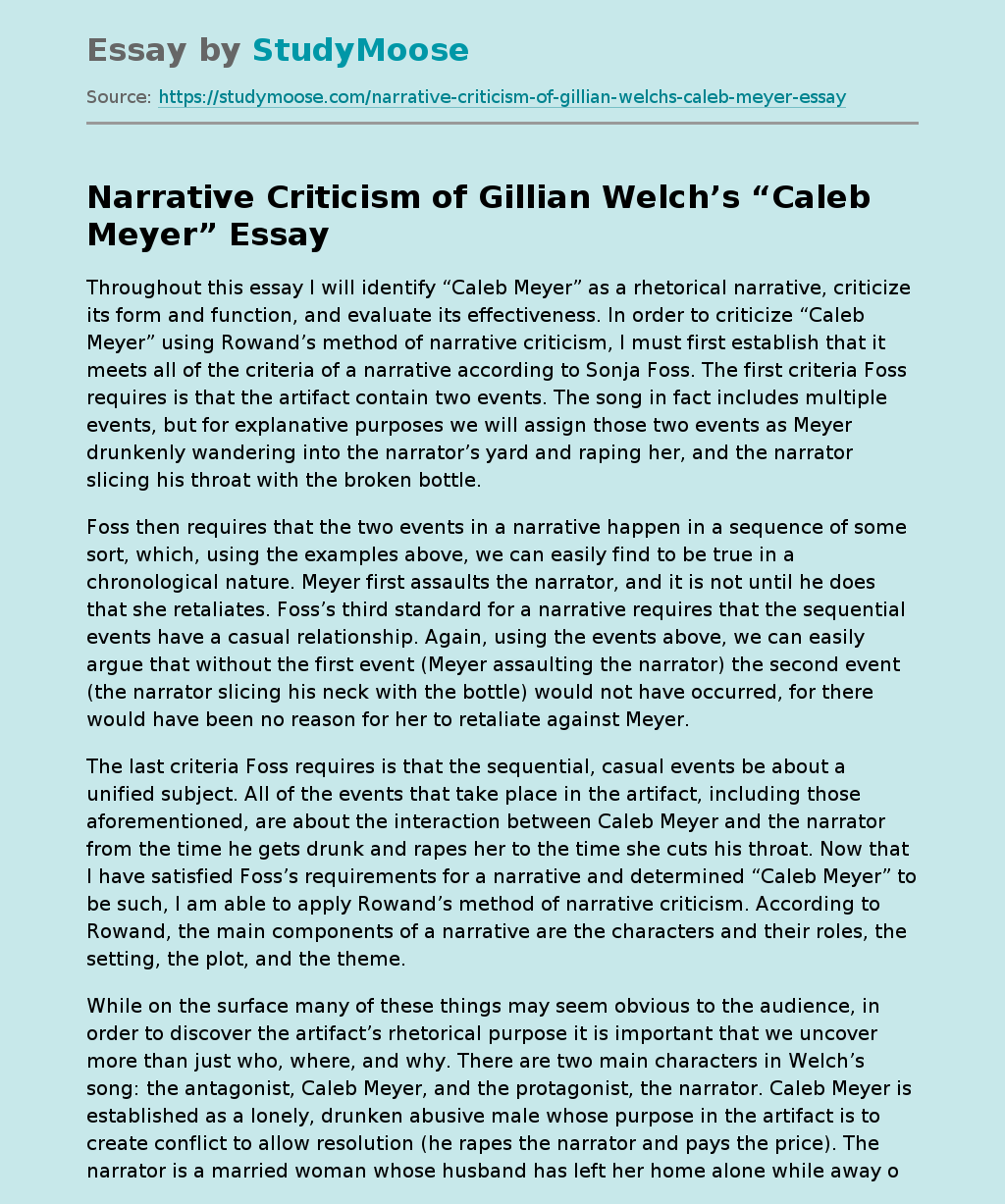