In the first verse, the hay cutting is depicted in a positive light: the hay is cut “Down at the end of the meadow, / far from the radio’s terrible news”. The distance from the “terrible news” leads us to expect a peaceful description of a harmless farming activity exempt from the violence happening in the outside world. The opening line of the poem sets up this expectation: “Summer, and the long grass is a snare drum”. There are some images inserted into the scene here that add a subtle feeling of discomfort or unease, the first of which is the sound of the “jets” in line 2.

Don't use plagiarized sources. Get your custom essay on
“ Gillian Clarke – The Field Mouse ”
Get custom paper
NEW! smart matching with writer

It is a sound one hears particularly if you live in Wales, the Lake District or Norfolk and Suffolk. The next is, of course, the “terrible news” of the radio, which, although we are removed from it, is still mentioned and therefore forms part of an ominous backdrop, along with the jets, to the hay cutting.

The image of the relentless hay cutting is also unsettling: “… All afternoon / its wave breaks before the tractor blade”. The blade of the tractor will be shown to be the instrument of death later on in the poem.

| The poem focuses now on the unforeseen damage to life that results in the hay cutting. We are made to experience the activity of hay cutting from another perspective as the first line talks of the “killed flowers”.

The damage done is extended to include the creatures of the field. Our first image of the subject in the poem’s title, the field mouse, is one that evokes pity. Clarke uses synecdoche and metaphor to create the image of the dying mouse. The child’s hands have become a “nest of quivering mouse” as substitute for the nest destroyed by the “blade”. The mouse is described in terms of its eyes: “its black eyes two sparks burning”. The “burning” is here suggestive of fear, pain and also of life – the two sparks as points of animation, the seat of the “life spark”.

This combined image of pain and life continues in lines 14 and 15 as the mouse “curls in agony as big as itself / and the star goes out in its eye”. A strong sense of empathy is evoked in us as the poet reveals a compassion many of us feel when confronted with an animal in mortal pain: “We know it will die and ought to finish it off”. The last lines of the second verse widen our focus to the entire field, which is “hurt” and “bleeding” after the relentless blade.

It is the children who witness the damage and destruction caused by the hay cutting: “the children kneel in long grass, / staring at what we have crushed”. Line 16 connects this specific localised agricultural incident to the war in Europe, the subject of the “terrible news” on the radio in the first verse. “Summer in Europe, the field’s hurt” links the two events, which the poet will connect in greater detail in the last verse. | The opening line of the last verse evokes the carnage that one expects on a battlefield: “Before the day’s done the field lies bleeding”.

This serves to emphasise the connection between the war that has shimmered as a backdrop to the poem so far and the inherent destruction of hay cutting. The “dusk garden” becomes a refugee camp “inhabited by the saved, voles, / frogs, a nest of mice”. These different creatures are unified by their shared trauma, as are human beings of different nationalities and cultures who are victims of war. This association is underlined by what follows in lines 21-22: “The wrong that woke / from a rumour of pain won’t heal”.

The poet now consciously connects all she has seen from the hay cutting with the war in Europe. She can’t face the newspapers and yet in her dreams she faces children who “dance in grass” just as the helpless creatures of the field. She sees “their bones brittle as mouse-ribs”, a realisation of the frailty and vulnerability of human and animal to destructive forces of people. The hum of the jets described in the first verse now becomes a “stammering with gunfire”.

The very last image in the poem refers more explicitly to the civil conflict of the 1990s in the former Yugoslavia, where the “neighbour” has become a “stranger”. She realises how easily her neighbour could become hostile: “my neighbour turned / stranger, wounding my land with stones”. The “land” referred to here has a wider significance in that it can be read to mean both the ground and any nation. The final lines suggest the territorial nature of the Bosnian war. Making land unfit for farming by spreading stones around (described in the Old Testament) is similarly a throwback to ancient times. 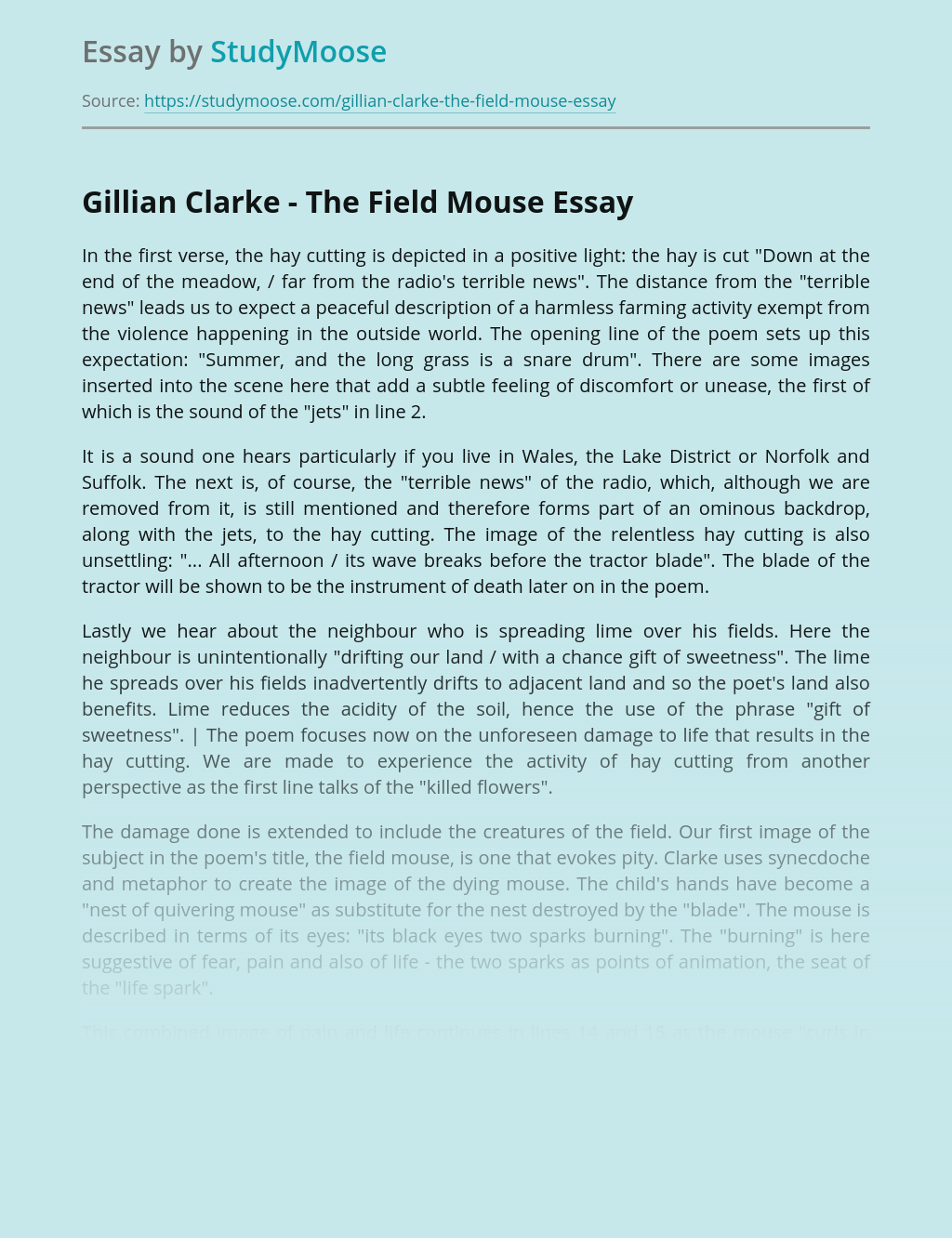