'Catrin' by Gillian Clarke, 'The Affliction of Margaret' by William Wordsworth

‘The Affliction of Margaret’ and ‘Catrin’ both deal with the struggle of a mother. However in Catrin, the tone of the mother begins as a frustrated one and gradually changes into a protective and more attached tone. Clarke illustrates the powerful emotions with her child through the colour imagery and tone. “Of our struggle to become separate. We want, we shouted, to be two, to be ourselves.” Clarke’s tension and aggravation can be felt by the reader due to her short imperative lines and also her metaphor of the taught rope/umbilical cord “trailing love and conflict”, the intense emotions are highlighted especially as the contrast from the beginning of the poem is so different to that of the ending.

Don't use plagiarized sources. Get your custom essay on
“ ‘Catrin’ by Gillian Clarke, ‘The Affliction of Margaret’ by William Wordsworth ”
Get custom paper
NEW! smart matching with writer

It is somewhat ironic, that during the childbirth it was the mother who fought to get rid of her child, to be free of such a burden.

Yet in the end “As you ask (child) may you skate in the dark for one more hour.

” It is the mother who clings on, who can not let go of her child. The colourful scheme that was present when the child was around has changed to a darker, more dismal atmosphere and through the drastic contrast of emotion and juxtaposition Clarke creates an emotional piece about her daughter that represents their relationship.

In the Affliction of Margaret, her hysterically desperate tone is achieved through the use of punctuation. “Alas! The fowls of Heaven have wings”. Her plea to ‘the heaven’ emphasises her desperation, as religion was extremely popular in the nineteenth century.

Margaret is clearly a devoted mother and she evidently idolises her son. Wordsworth shows this when he describes him “Well born, well bred; I sent him forth ingenuous, innocent, and bold” all admirable qualities that Margaret insists her son has. What makes this a powerful and emotional poem is that we are unsure of her son’s attitude towards her, and the relationship we see is merely one-sided. Is her hysteria really the result of her loss? Or is it her hysteria that is the cause of the loss? The ambiguity of the relationship in this poem makes Margaret seem even more so desperate than she actually is. Her emotions are heightened by the uncertainty of her son’s whereabouts.

On My First Sonne explores a similar idea of loss with The Affliction of Margaret, the difference being that Ben Jonson knows that his son shall not return. Ben Jonson illustrates his relationship by using the extended metaphor of his son being a gift from God. “Seven yeeres tho’wert lent to me, and I thee pay.” He also refers to his son as “thou child of my right hand” this suggests a fundamental part of him is missing, this idea is also presented in the incomplete title “On My First Sonne” the poem is one rhyming couplet away from being a sonnet and the title one letter away from being the complete word ‘Sonnet’. The tone of On My First Sonne is very much appreciative and Ben Jonson’s strong relationship is reiterated in the last lines where he vows to never love as much again, “For whose sake, hence-forth, all his vowes be such, As what he loves may never like too much.”

As opposed to the other poems, ‘Digging’ by Seamus Heaney is written in the perspective of the child. Heaney explores his ideas and relationships through the use of metaphor and tone. The poem starts off quite tense, “The squat pen rests; snug as a gun” the metaphor of the gun suggests that the pen may ruin and end lives – it is a powerful tool usually related to violence. As the poem progresses, Heaney uses colloquial vocabulary such as “By God, the old man could handle a spade. Just like his old man” the language shows that Heaney actually respects his father’s job as a farmer and does not look down upon it. The tension in the poem continues when he describes how digging has been a family tradition for generations, and he has chosen to give it up. Although Heaney appears distant from his father – due to their different interests – he has chosen to stay connected to his roots through writing about his homeland and digging. “Between my finger and my thumb, the squat pen rests. I’ll dig with it.” He still feels a great sense of pride and attachment to his father, but he simply “has no spade to follow men like them.”

All these poems illustrate different strengths and weaknesses within family relationships through using poetic techniques such as language, tone and perspective; I also think it is incredibly interesting how the only poem written from the child’s perspective ‘Digging’ is the poem where emotions seem more distant than the rest, suggesting that parental voices are more attached. Both On My First Sonne and The Affliction of Margaret cope with the loss of a child differently and they are explored in different manners. Clarke mainly uses the idea of juxtaposition to highlight the different attitudes faced within relationships, as no relationship stays the same. I think all these poems create a strong voice, and illustrate different relationships extremely well with the help of poetic techniques.

'Catrin' by Gillian Clarke, 'The Affliction of Margaret' by William Wordsworth. (2020, Jun 01). Retrieved from http://studymoose.com/catrin-gillian-clarke-affliction-margaret-william-wordsworth-new-essay 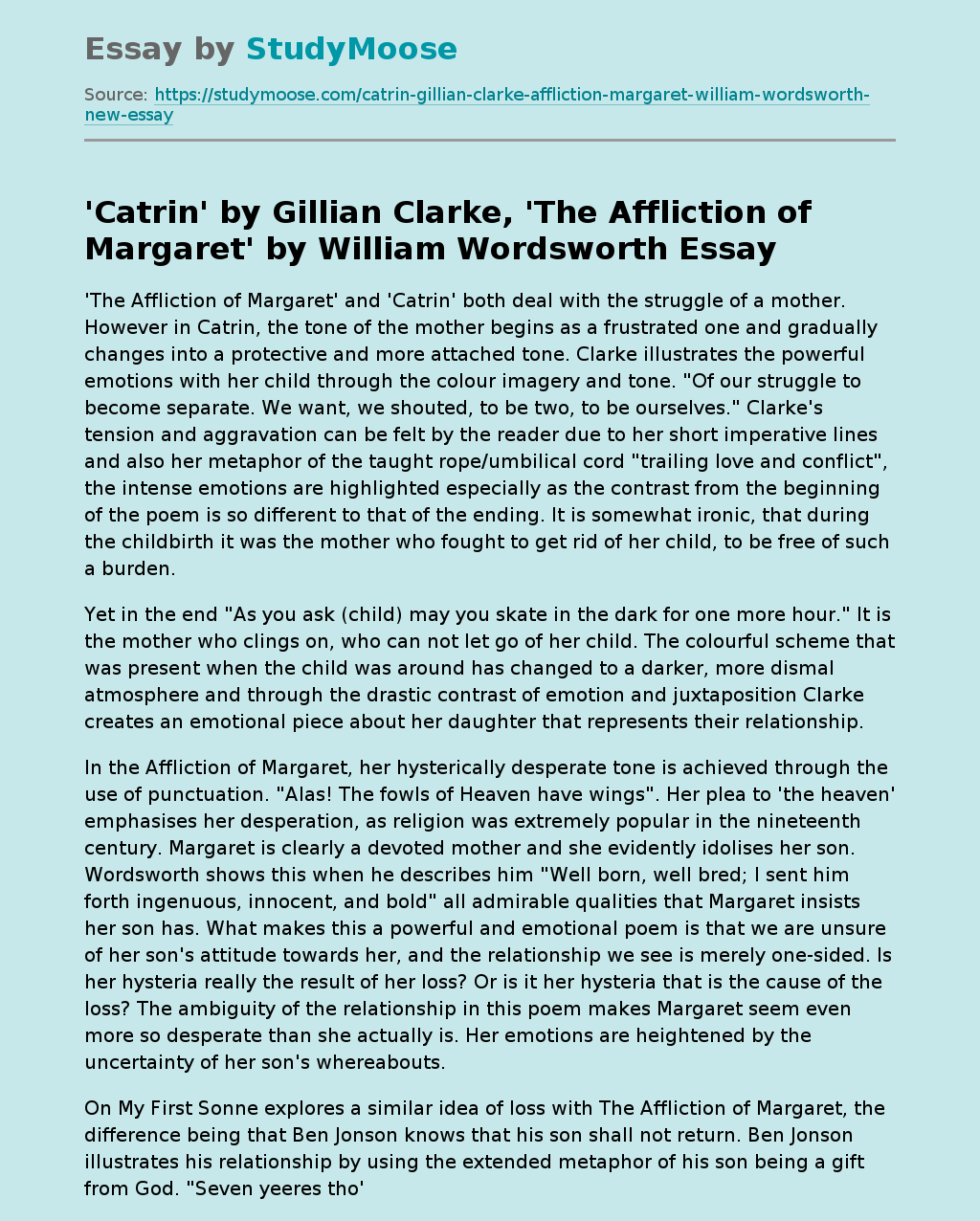