Analysis of "The Solitary Reaper" by William Wordsworth

William Wordsworth is considered by many to be one of the most efficient, and studied poets of English Literature. With his many talents, and aid by his sister, Dorothy Wordsworth, he had produced many stories and songs during his period. Wordsworth has been compared to the finest author in English Literature, William Shakespeare. Wordsworth’s talent is viewed in his many poems, including “I Wandered Lonely as a Cloud”, “Ode: Intimations of Immortality” and “The Solitary Reaper”. In the year 1803, Wordsworth, his sister, and his dear friend and fellow poet Samuel Taylor Coleridge had taken a trip to visit the Scottish highlands.

Don’t waste time
Get a verified writer to help you with Analysis of “The Solitary Reaper” by William Wordsworth
Hire verified writer
$35.80 for a 2-page paper

While there, they all witnessed solitary reapers, which were not a very uncommon sight. The poem “The Solitary Reaper” is based on one such girl who Wordsworth heard chanting an incomprehensible melody. He describes how he is astonished by this girl’s expressive beauty, and the peaceful mood it creates for him. In this poem, the most prominent lexical characteristics are repetition of words that express more or less of the same meaning.

For example, solitude, which in Latin is Solus—an adjective meaning ‘only, single, alone’.

Solitude is the theme throughout the poem, and Wordsworth chose various words to create a serene environment where readers can ponder about the meaning of the poem. This is evident in stanza one, where single, solitary, by herself, and alone are all words presented to express the solidity that the poem is focused around. There is another recurrence of words that is focused around the theme of sound.

The Scottish girl’s sweet singing, and the peaceful stage implicates melodiousness, and this is the reason why solitude and music is emphasized an exceptional amount of times throughout the poem. The singing girl in this poem is solitary in an optimistic manner. Sitting there, she is at one with nature and in the poem, is compared to nightingales and cuckoo-birds. Wordsworth is writing as though she almost is nature, and fits in perfectly with her natural surroundings. He states that her singing is much more entrancing than any of the birds, and insinuates that she is more than nature with “a voice so thrilling.

Wordsworth cannot actually hear human music in the girl’s song, but he hears the music of nature, and to him, this is much more admirable. Wordsworth sees the words of this song as poetry, making him mesmerized by the woman. The language throughout this poem imitates nature, and how it flows fluidly, and is set in a simple environment and still, beauty surrounds him. Throughout the four stanzas, the first and the fourth stanza follow the rhyme pattern ABABCCDD, where the second and third follow ABCBDDEE. There are many repetitions of vowel and consonant sounds, making emphasis, harmony, and unity.

For an example, the repetition of /ing/ sounds throughout the poem, (single, reaping, singing, sing, thrilling, spring, breaking, thing, ending, bending. ) These four eight-line stanzas are written in mainly iambic tetrameter. The main theme throughout the poem “The Solitary Reaper” seems to be one that admires the idea of nature, and one’s individual place within it. Wordsworth is able to hear the song of the solitary reaper, and hear the meaning of it in his own mind allows for a vast moral imagination. This would only be possible with Wordsworth’s acceptance into the natural setting.

Analysis of "The Solitary Reaper" by William Wordsworth. (2016, Dec 22). Retrieved from http://studymoose.com/analysis-of-the-solitary-reaper-by-william-wordsworth-essay 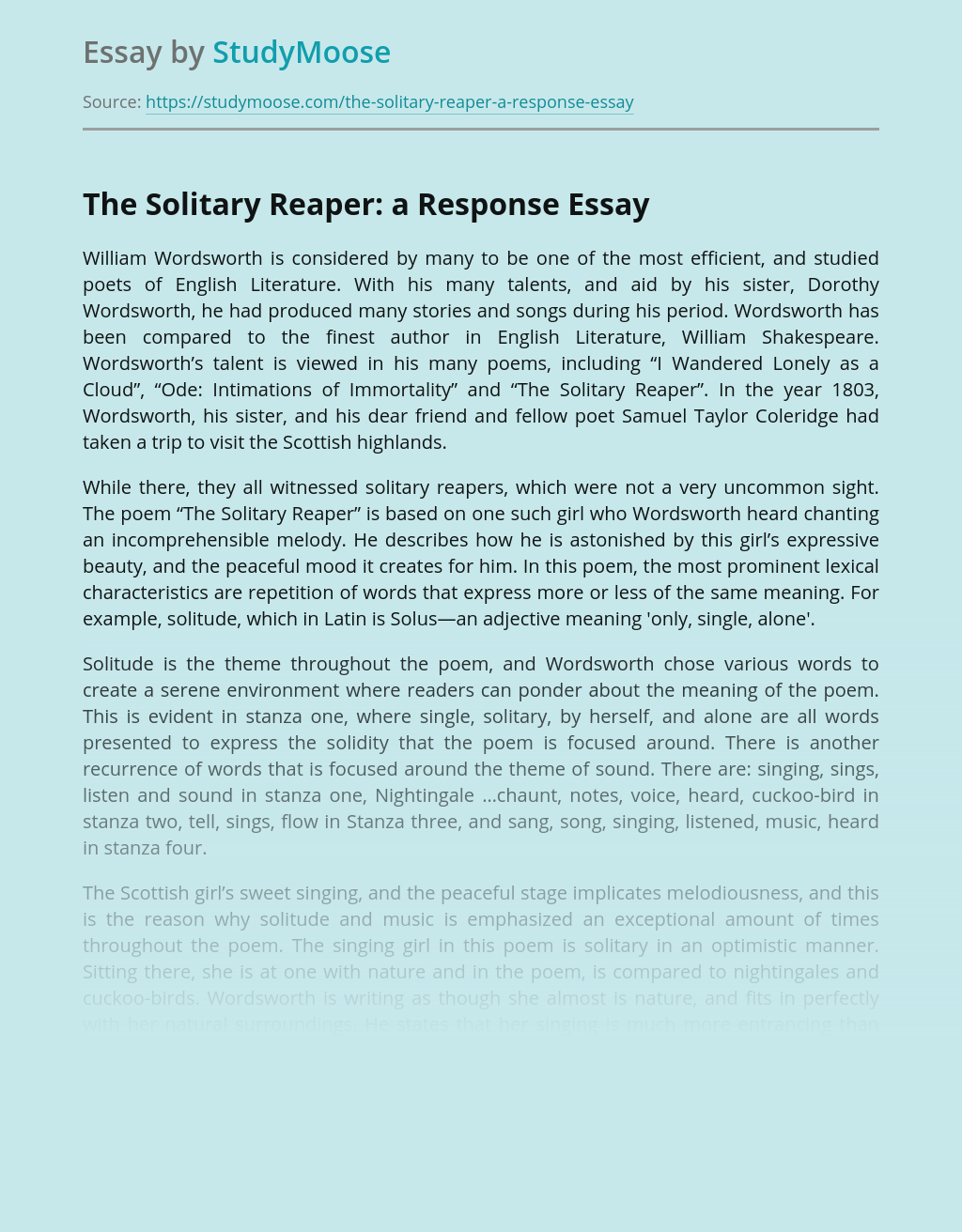 Don’t waste time
Get a verified writer to help you with Analysis of “The Solitary Reaper” by William Wordsworth
Hire verified writer
$35.80 for a 2-page paper
Stay Safe, Stay Original