Narration and Tone in The Tell Tale Heart, The Ghost in the Mill, and Cannibalism in the Cars

If fear, quizzical characters, and death all have something in common, it is that they are all present in each of the following short stories: Edgar Allan Poe’s “The Tell Tale Heart”, Harriet Beecher Stowe’s “The Ghost in the Mill”, and Samuel Clemens’ “Cannibalism in the Cars”. Each story has a unique and thrilling plot, with diverse characters, from the maniacs in “The Tell Tale Heart” and “Cannibalism in the Cars” to the simple storyteller in “The Ghost in the Mill”.

Don't use plagiarized sources. Get your custom essay on
“ Narration and Tone in The Tell Tale Heart, The Ghost in the Mill, and Cannibalism in the Cars ”
Get custom paper
NEW! smart matching with writer

Tones differ quite a bit in each; however narration is almost the same as each short story is being narrated by someone recalling the past. “The Tell Tale Heart” is a very ominous short story presented to us by the narrator who describes how he murdered an old man and his reason behind it. The story begins with the narrator telling his audience he felt nervous and that his disease (presumably his madness) had given him keen senses.

“The disease had sharpened my senses –not destroyed –not dulled them” (92). He then proceeds to enlighten readers by recounting the haunting idea that entered his mind—to murder the old man. He devises a very methodical plan to murder the old man—simply because of the old man’s blue eye which had a thin film over it. The “vulture eye” haunted the narrator, and thus he premeditated the ungodly murder which ultimately led to his own downfall. The way with which he kills the old man is very precise, allowing readers to feel a sense of disgust towards the narrator, yet at the same time his methodology is to be somewhat admired.

Prior to the old man’s death, the narrator remains objective about the old man stating that he did have a liking for the old man; however, the thought of the “vulture eye” made him irrational. Cynically he says, “I loved the old man….For his gold I had no desire. I think it was his eye! yes, it was this…

I made up my mind to take the life of the old man, and thus rid myself of the eye forever” (92). He graphically describes how each night for seven nights he would enter the old man’s bedroom and shine a lantern light into his eye—which he would always find closed, that is, until the eighth night. On the eighth night, the mad man found the old man awake and startled. Patiently, the mad man waits an hour for the old man to resume his sleep and when sure of his slumber shines the light precisely on the “vulture eye.” Upon discovery that the old man is indeed awake, he pounces on the old man and uses the bed to kill him shamelessly. Subsequently, he cuts the old man’s limbs off and puts them under the floorboard. The police then come after hearing a report that a neighbor had heard a shriek coming from the house.

Fearlessly, the narrator brings the police inside telling them that the shriek was his own coming from a dream, and that the old man was not to be found as he has supposedly in the countryside. Readers start wondering whether he will get caught or flawlessly fool the police. He shows them around the house jubilantly then offers them a seat once they are convinced of his innocence. The seat is placed above the old man’s body. Quickly things change, as the narrator’s fearlessness turns into agonizing desperation as he hears the beating of a heart grow louder and louder. Adrenaline pumps as he tries to mask the sound by making noise; however, his guilt could not be held within, and he admits his deed to the police. The underlying question in this last scene is whose beating heart is it? Is it the narrator’s heart, the old man’s, or was it simply in the mind of the narrator?

In Harriet Beecher Stowe’s “The Ghost in the Mill” a story is being told by Sam Lawson; however, it is being seen through the viewpoint of a man who is recalling the story from his childhood. It begins with a comforting homeliness as everyone prepares to hear Sam Lawsons story in days where there were no “magazines and daily newspapers…no theatre, no opera” (98). Lawson begins telling the story in a confusing street dialogue which then becomes clearer once the reader refrains from overthinking the words, but instead begins relying on context. Lawson begins the story by talking about the disappearance of Jehial Lommedieu. Then he speaks of a strong snowstorm which led Captain Eb Sawin to Cack Sparrows house for the night instead of heading towards Boston. At Cack’s house, they share a few drinks and laugh until they hear a sudden knock on the door.

Again, someone knocks at the door as if demanding to come in. Fearful, Cack opens the door to find Ketury—an old Indian woman who was feared in her town. There were notions that she did all sorts of immoral practices and was “ ‘to the [service of] the Devil’ ” (104). Ketury incited fear in Cack, “ ‘Cap’n Eb says he never see a fellow seem scareder than Cack did when he see Ketury a-standin’ there’ ” (104). There is a sense of spookiness when Lawson makes a reference to brown leaves flying through the wind referring to how Ketury came through the wind. An evil smile presents itself on Ketury’s face as she looks at the chimney and begins to call out “ ‘Come down, come down! lets see who ye be’ ”(106). Piece by piece, a man is formed from the chimney. It turns out to be Jehial Lommedieu.

Cack becomes traumatized and admits how his father killed Jehial for his money and he helped hide the body in the chimney. Afterwards, Cack only lives for a few more days. “The Ghost in the Mill” has strong references to church. Methuselah, the devil, and the effects of not going to church are present in the story. Sam Lawson criticizes Cack and says he is “an immortal crittur lyin’ loose all day Sunday, and not puttin’ on so much as a clean shirt…What can you ‘spect to come of it” (102). Then, Lawson tries to teach the story-goers a lesson by showing everyone the example of Cack. Additionally, in this story, a body is hidden in the chimney, while in “The Tell Tale Heart”, the body is also hidden, but under a floorboard.

The congressman and the other professional men in the train were starving and so a proposal for cannibalism was brought up. The way they went about being cannibalistic can only be described as overtly political. By the time the congressman has to go—for he has reached his stop, he tells the passenger listening to the story “I like you, sir; I have conceived an affection for you. I could like you as well as I liked Harris himself” (117)—Harris being the first man he ate. The passenger gets alarmed at the thought of having Harris’ fate; however, he is later told that the congressman is a monomaniac, thus, the story was all made up.

Men who were to be eaten were chosen in the most diplomatic way—by candidacy and vote. The men chosen were calm and simply accepted their fate, not once alarmed. The ease with which people were eaten is rather humorous as it seems that men were getting gulped down with no remorse from others—almost gluttonously. It is almost as if there is no fear in this story due to its entertaining humor, unlike the other two stories which were chilling. Unlike “The Tell Tale Heart”, this story doesn’t give any details about how the bodies were prepared, but simply jumps to who got eaten.

The victims taste was given personal attributes such as “the next morning we had Morgan of Alabama for breakfast. He was one of the finest men I ever sat down to –handsome, educated, refined…a perfect gentleman, and singularly juicy” (116). Just like in “The Tell Tale Heart”, this story is straight forward and quickly goes from mysterious to overt honesty. Unlike “The Tell Tale Heart”, the description of what happens to victims is vague and practically nonexistent. Also, in “The Ghost in the Mill”, the characters lack the eruditeness present in characters from “Cannibalism in the Cars”.

Narration and Tone in The Tell Tale Heart, The Ghost in the Mill, and Cannibalism in the Cars. (2016, May 04). Retrieved from https://studymoose.com/narration-and-tone-in-the-tell-tale-heart-the-ghost-in-the-mill-and-cannibalism-in-the-cars-essay?post 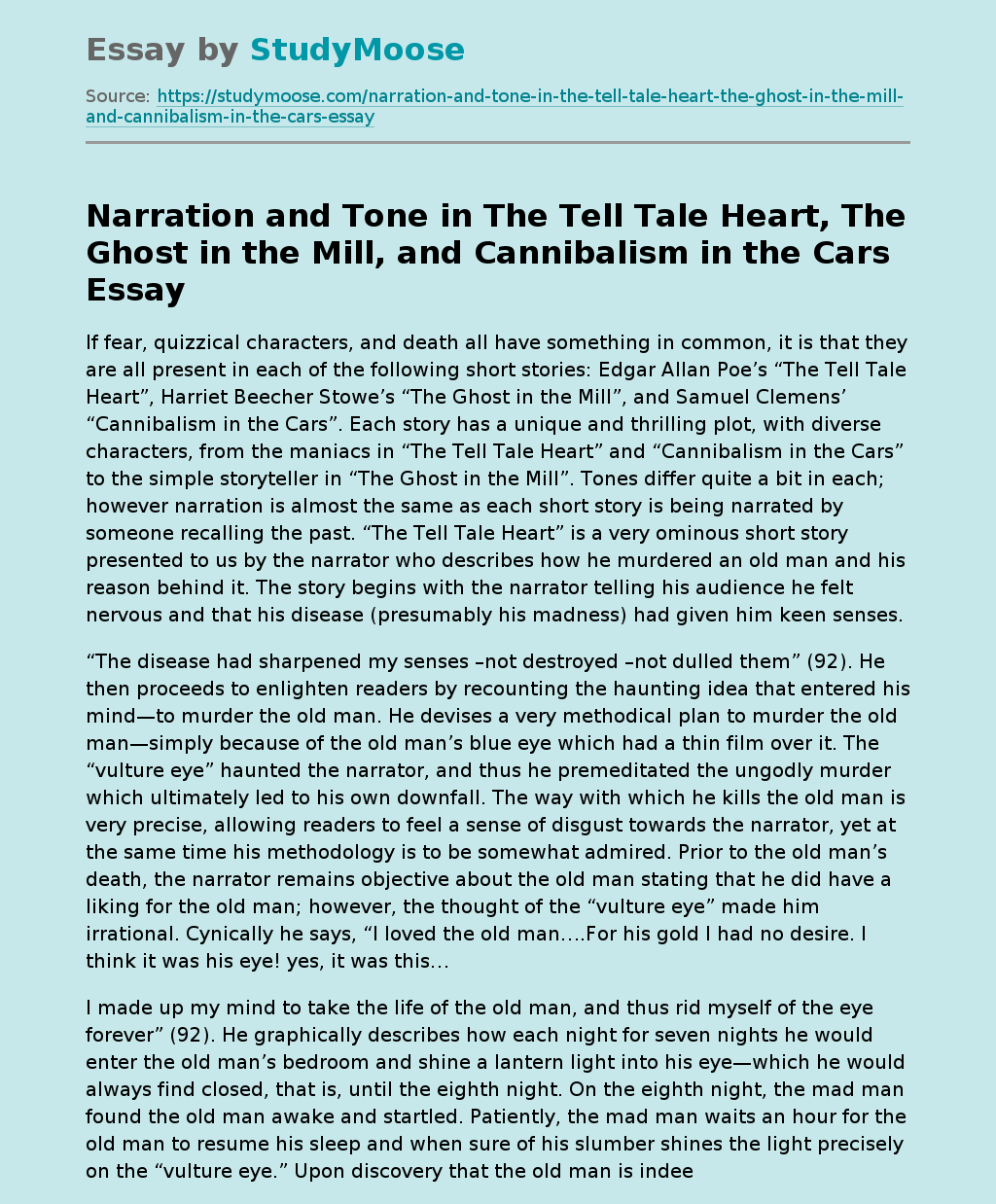