Sir Stephen Harold spender was an English poet, novelist, and essayist who concentrated on themes of social justice and the class struggle in his work, (February 28, 1909, London- July 16 1955). Stephen spender took a keen interest in politics and declared himself to be a socialist and pacifist. This poem is about a boy who longs to be part of a group of children who he looks up to. I think the poet is writing about himself because he uses a lot of words like ‘my’, ‘me’ and ‘I’.

The fist line seems to blame the Parents of the situation, and only after finishing the poem, you understand that is was actually the parents fault.

In the first paragraph the poet introduces some of the things the children do. The poet writes about them throwing “Words like Stones”, this indicates that the language would hurt him, it was insulting. He also writes about how they dress and take off their clothes. The children wear rags and ‘torn clothes’, these boys wore such torn and ragged clothes that he could actually see their thighs where the clothes were torn.

“They ran in the street”, as a middle class boy, his parents probably would not allow him to play in the streets. “And climbed cliffs and stripped by the country streams”, these boys could go wherever they wanted, without parental supervision. This gives the idea that the children have a reckless nature, they are the lower class. This is a gang of kids that the author was not allowed to hang around, but he must have felt very lonely.

He is quick to show the misery of their situation.

The second verse, it tells movement of a jerking action. I think this is effective because it helps paint a picture in the reader’s head of the boy “jerking” under the boy’s knees, of the violence involved when they attack him. He was frightened of these boys, because they would fight him, and pin him to the ground, kneeling on him so he couldn’t escape. Perhaps they hit him as well. (Jerking hands)

“I feared the salt coarse pointing of those boys who copied my lisp behind me on the road”, He was frightened by the way they pointed at him in a rude way, and mimicked the way he spoke.

The third verse shows, that these boys were strong, agile boys, who would lie in wait for him to pass by. They hid behind hedges, and as he drew near they leapt out at him, “barking like dogs” or shouting roughly. They threw mud at him, and he could not retaliate, but had to keep walking, and pretend it was funny. But actually, it was frightening and hurtful. He really wanted to be friends with them, and play their rough games, but they never invited him, he was just the object of their scorn. The contrasts again between weak and strong, lithe, sprang, barked. Those are all strong words suggesting that he was bullied by the local ‘gang’ of street children. He was excluded from their community because of his class and his lisp. He seems to be envious of their freedom, the freedom that “rough kids” take for granted.

There seems to be two existing worlds, one of the lower class, and the other the middle class, this seems to create an invisible barrier between the two worlds. The children and the boy are all jealous, jealousy works both ways. The middle class boy wants to change his life, he see’s the bully’s to be free, though he is not, and they see him to have everything he’s ever wanted, but either way no ones happy, he wants to spend a day in their shoes.

The poem is set as 3 stanzas, quatrain, the lines 1 and 2 are erratic. There is a lot of alliteration, for example, climbed, cliffs, and country.

The poem is about rich vs. poor, over all in the poem “My parents kept me from children who were rough” a young

boy is being bullied by rough and strong boys who intimidate him, so his parents have chosen to keep him away from them. It also brings in two worlds of childhood, the lower and higher of children.

‘My parents kept me from children who were rough’ by Stephen Harold. (2017, Sep 26). Retrieved from https://studymoose.com/my-parents-kept-me-from-children-who-were-rough-by-stephen-harold-essay 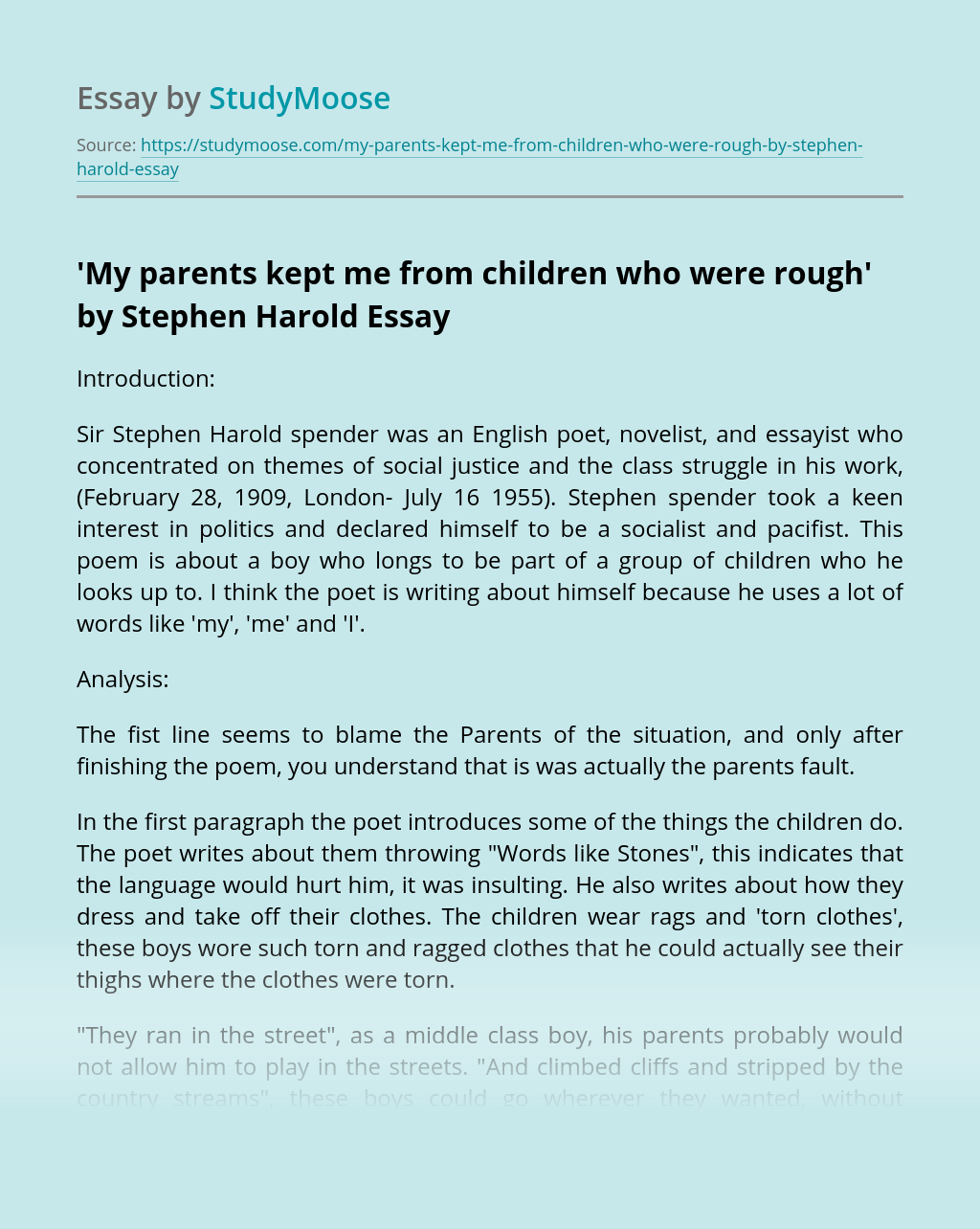 Juliet is the daughter of Lord and Lady Capulet, a wealthy and well-respected family. Although young and members of opposing families in a long-standing feud, Juliet and Romeo fall instantly in love with each other, and marry in secret. Her parents remain unaware of their relationship, and are determined that she marries Paris; it is...

Relationships Between Parents and Children in Poetry

Many poets use poetry to express their feelings on their relationships with their parents or children. ‘Poem at Thirty-Nine’ by Alice Walker is about a girl who has grown into an adult and is thinking back to when she was younger. In the poem she talks about how much she misses her father because he...

Get Essay
Should parents smack their children

In this essay I am going to outline and assess the effects of smacking children and what the consequences are in later life. I will use evidence and statistics and evaluate the outcome of them. Do you want your child to grow up with violence, theft, drugs and bulling? Dr Phill Jones argues that children...

Near The School For Handicapped Children Essay

Though many are of the view that childhood is the happiest time of a person’s life I do not think we can generalize it is so. Of cause childhood is a very enjoyable phase in a man’s life which is free from many responsibilities and challenges of the adulthood. However I believe there are several...

“Sparrow” by Norman MacCaig has a strong social issue of the class system and how the classes differ. MacCaig talks about the concern of the class system in relation to survival of to fittest. The poem itself speaks about birds like sparrows and other birds in basic, which are metaphors for individuals. Word choice, sentence...

The article Parental Influence on Children’s Socialization to Gender Roles by Susan D. Witt is about gender socialization and the primary role parent’s play. She states that children learn at an early age what it means to be a boy or girl. Witt states that it is different for a child to grow and not...

To Statistacom in 2018 there were about 196 million children in

To Statista.com, in 2018, there were about 19.6 million children in single-parent families in the United States. 16.4 million are with their mother while the rest are with their father. As years past, children growing up in a single-parent household are to be viewed differently. A single mother or father raising a child alone sounds...