Childe Harold’s Pilgrimage is a travelogue written by a melancholic, passionate and expressive tourist. Byron wrote this poem on his travels trough Spain, Portugal, Albania, Greece, Belgium, Switzerland, the Alps and Italy.

The hero of the poem, Childe (an ancient term for a young noble awaiting knighthood) Harold is a young extremely emotional man who turns away from the regular society and humanity and wanders through life caring the heavy guilt of mysterious vices of his past.

The poem reflects Lord Byron’s views regarding nature and society.

Don't use plagiarized sources. Get your custom essay on
“ Childe Harold’s Pilgrimage ”
Get custom paper
NEW! smart matching with writer

In Byron’s Childe Harold’s Pilgrimage we find two opposing forces, one of which is highly idolized by Byron, while the second one is definitely less admired. On one side we are facing the glorious nature, the freedom, the joys of the wilderness and the power of the ocean, while the opposing side is represented by the society, man’s humility, man’s weakness, political and spiritual slavery, illusionary freedom and false love.

Byron worships the nature and constantly attempts to escape the madness of the society.

Byron was devoted to nature above all, as it is the only thing capable of bringing a man closer to God, eternity and understanding of the unknown. “To mingle with the Universe, and feel, what I can ne’er express, yet cannot all conceal”, thus, nature is man’s only way of roughly touching the mystifying beyond, the inexpressible, that colossal feeling of the grandeur of creation, which we can not express, yet the most emotional of us are at least able to feel.

Nature is our only link to the glorious power of life and universe. Our only way of understanding our selves, our souls and minds is through facing the nature.

Lines like: “Art, Glory, Freedom fail, but Nature still is fair”, reflect Byron’s belief that nature is above all, and that when everything fails, nature is the only thing capable of helping one overcome his emotional troubles. As if he would say that despite the remarkable glory of all those human virtues, none of them is comparable to the force and magnificence of nature. While one force is our society which has a tendency of producing: “Wealth, vice, corruption – barbarism at last”, the other force is nature, which is named “nursing nature” by Byron, as he believed that nature is the only thing capable of healing one’s heart and saving one’s soul.

He presents an escapist vision of nature, representing nature as an escape from the “madding crowd”, introducing what we might call some “environmentalist” ideas. In Childe Harold’s Pilgrimage the society is characterized by the “hum of human cities torture”, while nature is the escape, a place to which “the soul can flee”, breaking unrestricted into “the sky, the peak, the heaving plain of ocean, or the stars”.

Byron sees society as a passing phase. “From society we learn to live” writes Byron, meaning that our physical fatal existence in this world is united and represented by the society, while: “‘Tis solitude should teach us how to die”, meaning that the true eternity, spirituality and one’s connection to his soul is achievable only through one’s relationship with nature, thus, through a relationship with “mountains, leaves, and flowers”.

Byron is not rejecting the society, but his real object of worship is definitely nature. He declares that there is no truth beyond nature and wilderness, yet the society is not rejected: “I love not man the less, but Nature more”, thus, man is beautiful and capable of achieving greatness, yet he is mortal and incomparable to the eternal brilliance of nature.

Byron never completely rejected society, but his object of adoration and astonishing love is definitely the Nature: “Nature” with a capital “N”, as a religious person would spell “God” with a capital “G”. Indeed Byron worships nature as one religious fanatic would worship god. Lord Byron believed in Nature above all, as Nature was the only real truth for him. 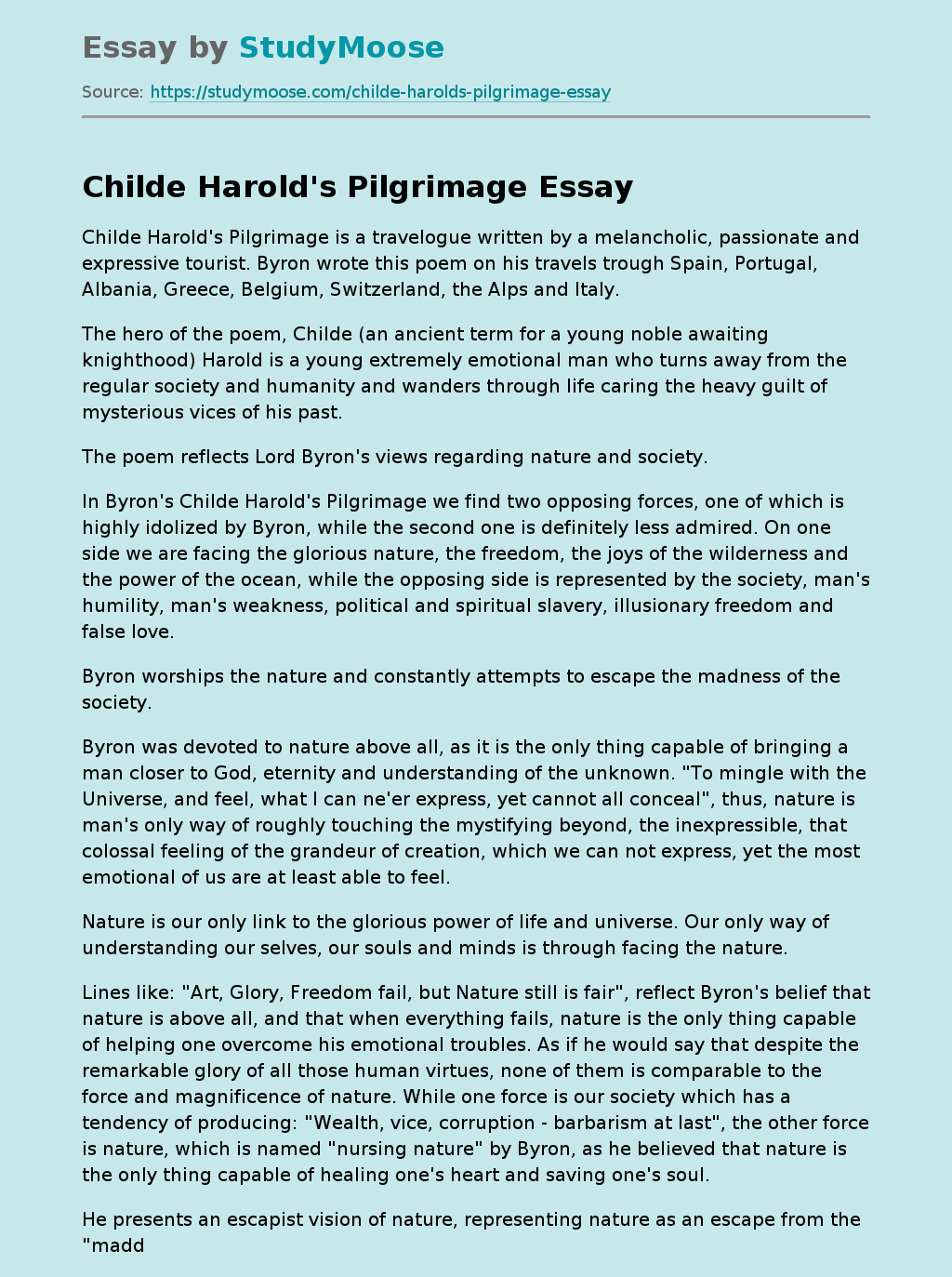