Music, in its most primal form, exists to tell a story. Good stories, stories which endure, convey more than a simple description of events. Good stories draw the listener in and create an emotional response. The best stories are those which leave room for the listener to improvise a personal meaning. As one of the oldest forms of storytelling, music which can accomplish these goals succeeds universally. Few styles of music accomplish the goals of storytelling more successfully than the blues tradition.

Don't use plagiarized sources. Get your custom essay on
“ My Favourite Song of Jethro Tull Locomotive Breath ”
Get custom paper
NEW! smart matching with writer

The blues gave birth to the style of music generally known today as rock and roll, and in “Locomotive Breath,” both genres work together to tell the story of a lonely man on the path to destruction. The goal of Jethro Tull’s “Locomotive Breath” is mainly entertainment, without any overt political or social message, but it certainly has a story to tell. Instrumentally, “Locomotive Breath” consists of three very distinct segments, each with a unique sound. The first segment opens the scene for the rest of the song.

It consists of a melancholy piano, accompanied by short, sympathetic riffs from a distorted electric guitar, leading up to the second section, a full duet, before the song proper begins. The overall sound is unmistakably the blues, which suits the sorrowful, negative lyrics of the song. As the duet of the piano and guitar begins at around 0:45, the piano relinquishes the lead to play a rhythmic, pounding measure, highlighting the guitar solo only with brief flourishes.

At the climax of the duet, approximately 1:15, the song shifts gears with a single drawn-out and distorted note from the guitar, and the main body of the song begins, along with the lyrics.

After the train-whistle-like note dies out, an entirely different rhythm and timbre define the lyrical portion. There are two persistent beats measured – one, by the bass, is slower and droning in the background; the other, sharper and twice as fast, is by a muted electric guitar.

Together, they can evoke any number of images or ideas, but I believe the main intention is to create the sound of a traveling locomotive. A possible alternative for these rhythms is the sound of a running man, with the muted guitar representing his racing footsteps and the bass, his pounding heart. Over this driving, steady beat, the guitar accompanies Ian Anderson’s vocals in a call-and-response form, with slight variations to a central riff following each phrase individually for the remainder of the song.

Careful listening reveals that the structure of the response riff mirrors the words sung. Only during the refrain is this careful pattern of call and response disrupted, as the relatively quiet interludes between guitar response riff and vocals erupts briefly into a wailing of distorted guitar. The guitar then drops out for a moment, and finally returns briefly, much lower in timbre, to end the chorus segment. A very unusual and intriguing interlude occurs just after the second repetition of the refrain.

The lyrical section, or call, of the song is replaced by a frantic flute solo played against the same pounding bass rhythm that underscores the entire piece. After this rather long interlude, the call-and-response format of lyrics and guitar reiterates for another verse-chorus segment, and the song ends. I believe the three sections’ very different sounds communicate a critical part of the story of “Locomotive Breath. ” In the beginning, the piano’s tone is gloomy, depressed, and slow. This evokes an image of a man contemplating what has become of his life, possibly over a bottle.

The shift into the duet between the melancholy, classical sound of the piano and the angrier, blues-like tones of the electric guitar calls to mind an image of the man arguing with himself, unable to decide on a course of action. The transition from the duet to the main body of the song hinges on the electric guitar, which suggests that the man has chosen a destructive route. The now-steady pulsing of the rhythm forcefully evokes the thought of travel, either by train or on foot, and tells the listener that whatever the man has chosen, he is committed to his choice.

I identify two interpretations of the lyrics of “Locomotive Breath,” which differ mainly in the identity of the thing the main character is trying to avoid. In one, he attempts to avoid his mortality, and the inevitable end of his life, whether through old age or some other device. In the other interpretation, the man is caught in the grip of an addiction which has claimed control of his life and transformed him into a runaway train.

No matter which interpretation one accepts, Jethro Tull wastes no time with lyrical preamble – the very first lines set the stage for the main character as fleeing “In the shuffling madness / of the locomotive breath. ” The second line also introduces the ongoing metaphor of the man’s life as a locomotive. The song continues its description of the running man as “the all – time loser,” heading straight to his own demise. Anyone hearing only this much of the track will realize that the main theme of the song is this man’s inevitable destruction, either at his own hands or by external forces.

A persistent metaphor in this song casts the main character as a machine, specifically as a train. He “feels the piston scraping,” which refers to his lungs burning as he tires, and “steam [breaks] upon his brow,” obviously sweat. Following the first interpretation, these lines would indicate that this man is not only going to die, he’s almost dead. However, under the second interpretation, these lines could signify a variety of conditions. First, the man could be in need of a fix, and he feels miserable because of the approach of withdrawal.

Alternatively, he could be regretting the choices that have led him down the path of addiction, so his pain is psychosomatic. In both interpretations, the refrain makes it clear that because “old Charlie stole the handle,” this man “won’t stop going” and has “no way to slow down,” or turn away from his path. I’m fairly certain that “old Charlie” is a slang reference to the Devil, suggesting that an outside force of evil now controls this man’s life – certainly the man has no control anymore.

The next section of verse deals with those the main character held dear in his life – his children, who have abandoned him “one by one,” and his woman, presumably his wife, now “in bed with his best friend and having fun. ” In the first reading, his children have grown up and left home to start their own lives, at different “stations” along the man’s life. The loss of his woman could come from divorce, adultery, or some other problem, but the end result is the same. These woes have reduced him to crawling on his hands and knees in the corridor of the train -symbolizing his life – wondering what went wrong.

On the other hand, if the interpretation of addiction is followed then it is more likely that his behavior drove his loved ones away. Again, the chorus reiterates that the Devil, in the form of old age or drugs, now owns this man’s life. The flute solo occurs after this verse, adding emphasis to the feeling of desperation the man is experiencing, and setting the stage for the final verse-refrain pair. There are two very different ways to examine the final verse. The difference lies in whether or not the main character is already dead.

The “silence howling” and visions of angels supports the idea that he has already died. However, these same lines could also be interpreted as the state he reaches after getting a fix of whatever he’s addicted to. This final segment of verse also contains the line that gave me the idea that “Locomotive Breath” might be about addiction. “The all – time winner” (in contrast to the “all – time loser”) has this man “by the balls. ” The ambiguous identity of “the all – time winner” is no doubt intentional on the part of Jethro Tull, but to me it indicates alcohol.

What drug has conquered and destroyed more lives than that substance? If one subscribes to the other interpretation, then the all – time winner represents either time or Satan. Either way, the final line of verse hints at the life this man has led – he picks up a Gideon’s Bible, which implies that he doesn’t own one himself, and opens it at “page one. ” To me, this indicates that he has never opened a Bible before this point, and only in the twilight of his life does he turn to God for salvation. However, Jethro Tull has a surprise at the end of this song.

In the final repetition of the refrain, “old Charlie” is replaced with “God. ” This shows that the man’s position, either death or addiction, has become so severe that he blames everyone, including God. Several of the long-established themes of blues and rock and roll music occur in the lyrics of “Locomotive Breath. ” One major theme, alienation, can be seen in the lines describing his children and woman leaving him. Even his best friend has become an enemy, by getting into bed with his old lover. The loneliness and pain resulting from these separations spurs the main character further along his path.

Another theme found in “Locomotive Breath” is the death, or at least destruction, of the main character. Although the end of the man’s life isn’t explicitly spelled out by the lyrics, Jethro Tull’s intention is undoubtedly to convey the impression that the main character’s path is one of decay. The genre of heavy metal, which evolved during the same period as “Locomotive Breath,” deals heavily (no pun intended) with the idea of madness and insanity. The very first line of the song introduces the character’s “shuffling madness,” setting the tone for the remainder of the song.

Finally, the theme of the locomotive is impossible to ignore in this song – the title even includes the word. Trains have been a part of the blues tradition since its earliest conception, evoking images of travel, dislocation, and change, all of which are present in “Locomotive Breath. ” A clear parallel exists between “Locomotive Breath” and Meade “Lux” Lewis’ song “Honky Tonk Train Blues. ” Both songs deal with dislocation, sadness, and alienation, and both include rhythms which suggest the actual sound of a moving locomotive. The train theme emerged during Lewis’ time, and has endured all the way to today.

The true draw of a story is more than simply curiosity about what happens to the characters. Real interest in a story or song comes from projecting one’s own life onto the events of the tale and vice versa. Only then does sympathy come into play, and only then can a bond form between audience and story. The events described in “Locomotive Breath,” however metaphorical, serve to create a bond between a person listening to the song and the fictional main character. Jethro Tull draws upon well-established blues and rock and roll traditions to bring the character in the song and the listener together on a spiritual level. 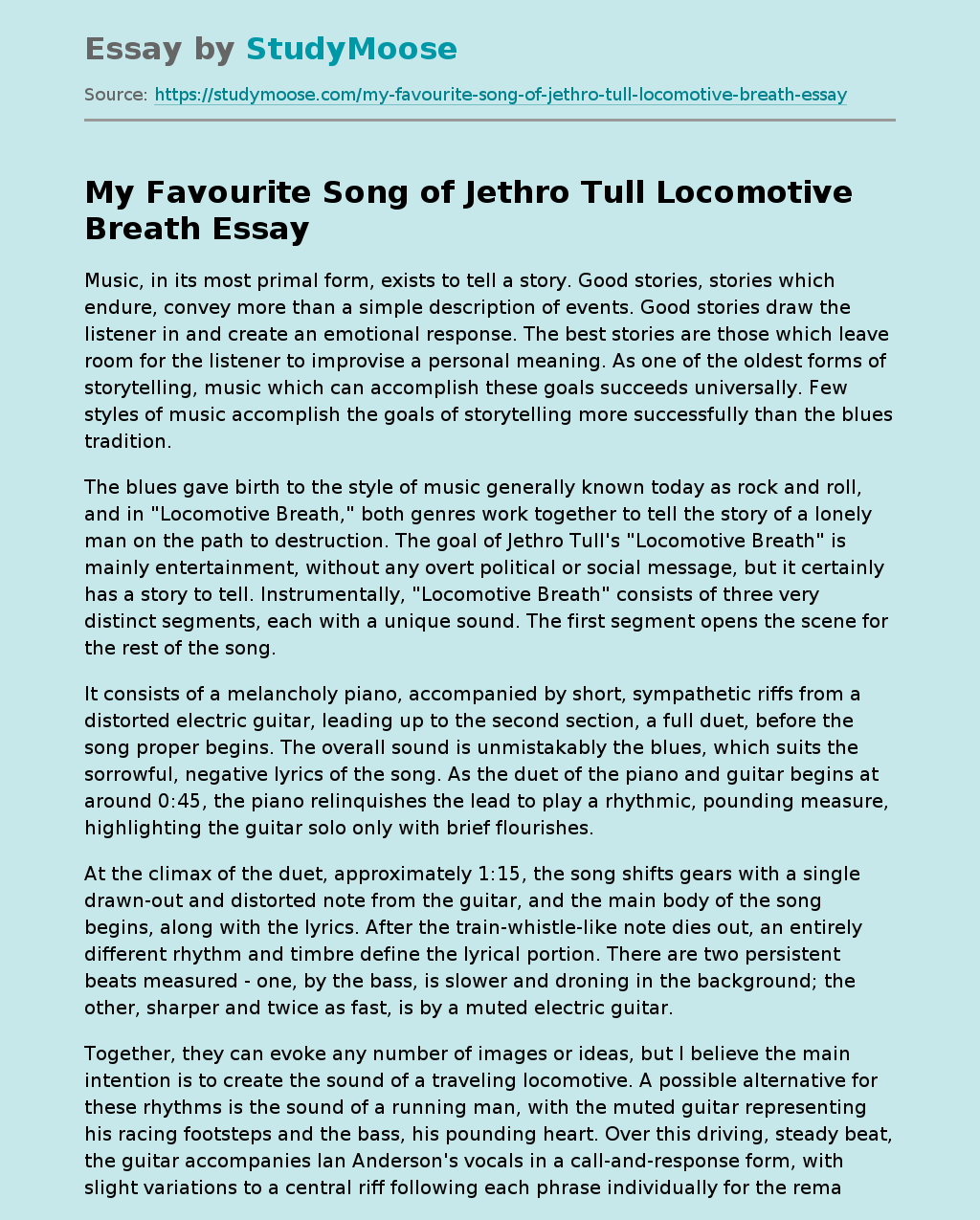