Why Mr Tambourine Man is A Modern Classic

“My senses have been stripped

My hands can’t feel to grip

My toes too numb to step.

Don't use plagiarized sources. Get your custom essay on
“ My Favourite Song Mr Tamborine Man ”
Get custom paper
NEW! smart matching with writer

Another obvious reference to drug-taking comes from the fourth verse, “Take me disappearing through the smoke rings of my mind…” The smoke rings relating literally to drugs being smoked, and the last line of the last verse, also if taken literally, relates to escaping from the realities of life by using drugs: “Let me forget about today until tomorrow”.

However, this interpretation does not explain some of the vivid imagery used throughout the song where it is not easy to draw parallels between drugs and the image, for example, “The haunted frightened trees”. This phrase could be written about the emotional state of the drug user, and by embuing those emotions onto something else the surreal atmosphere already invoked in the earlier passages is heightened. In the second and third verses there are several lines expressing suprise at feeling fatigued: “My weariness amazes me” and how the body is also tired: “my toes too numb to step.”

Bob Dylan said himself “Drugs never played a part in that song… ‘…disappearing through the smoke rings of my mind….’, that’s not drugs, drugs were never a big thing with me.” This leads me to believe that the song is indeed about something other than drugs. Some analysts have written about the song as an expression of freedom. One clear example of a phrase that expresses a sense of freedom is, “To dance beneath the diamond sky with one hand waving free/ Silhouetted by the sea…”

This image strongly evokes the idea of someone living freely, both literally, dancing a beach, and the connotations that the sea and the sky provide here, of openess and liberty.

There are several references to ‘escaping’, for example, “I’m ready to go anywhere…”, “…but for the sky there are no fences facing” which means that the sky is the limit, “…just escaping on the run” and again “Let me forget about today until tomorrow.” These lines fit with the freedom theme: escaping to achieve freedom. But forgetting about today until tomorrow seems only a temporary escape, bringing the back the idea about drugs.

It has also been suggested that Mr. Tambourine Man is a poem about transcendence, or reaching enlightenment. Some people see Bob Dylan himself as Mr. Tambourine Man, and he does “Cast [his] dancing spell” through the magical and fantastic imagery of swirling ships and trips into one’s own mind.

I believe that the song could be about all of these ideas, and the importance of one in particular relating only to the mood of the listener. This is an important reason for stating that Mr. Tambourine Man is a classic: The lyrics provide the possibility to understand the song in different contexts by different listeners. The ideas differ between people, some finding freedom in Dylan’s song, some feeling like they are under a spell when listening to the light repetitive tune and figurative language.

The cleverness of the language is that people can read almost anything into it, the most basic example being Mr. Tambourine Man, who can be seen as anything from a drug-dealer to a religious man to Bob Dylan himself. Another reason that the song has such a hallucinogenic feeling is the structure of the song. The verses are made up of what appears to be many individual concepts put together, like a dream, giving a surreal effect. The reference to Ozymandius and crumbling empires furthers the dream-like quality of the words. 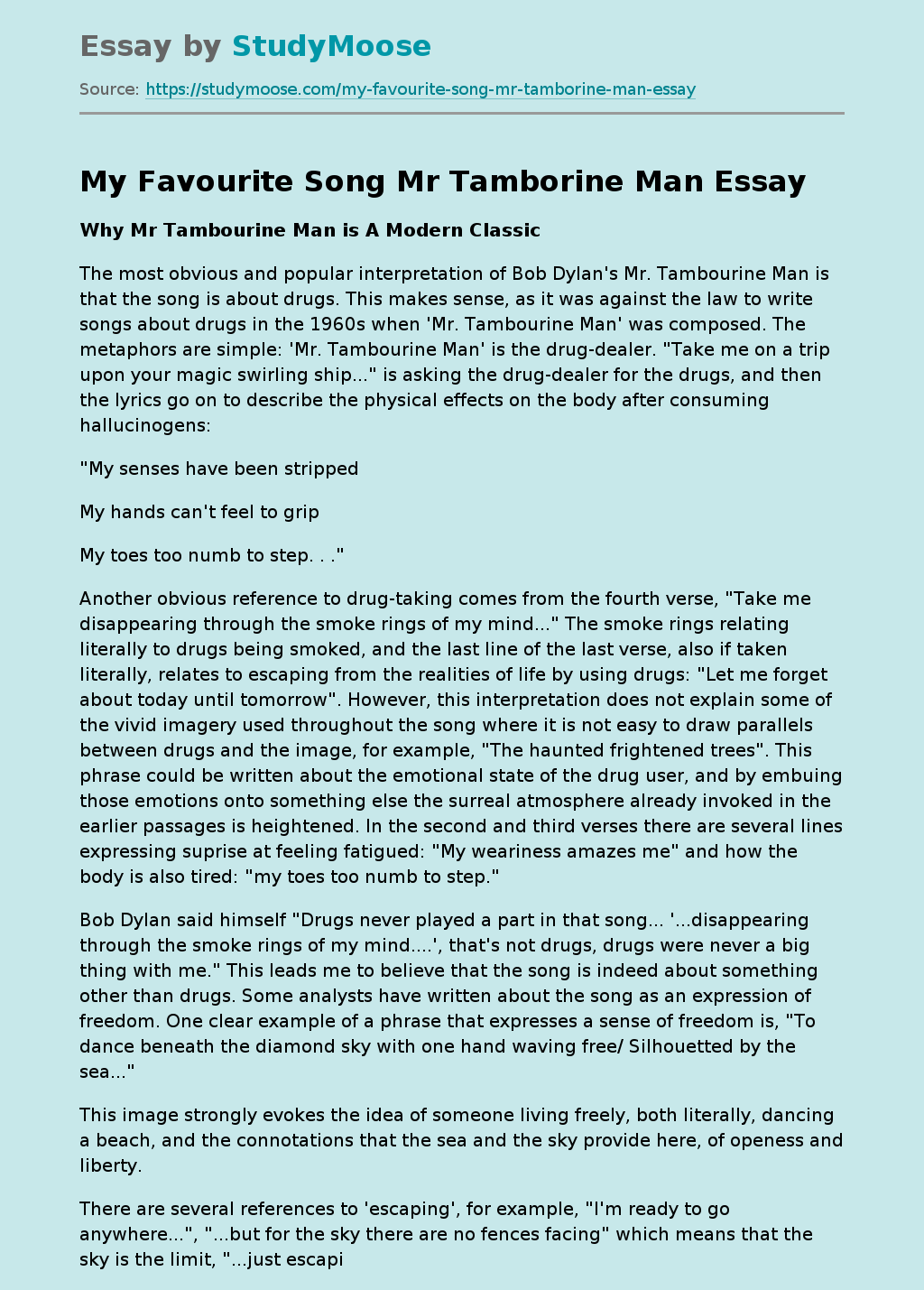