My Favourite Song What Does the Fox Say

Billboard might have already christened Robin Thicke’s Blurred Lines as the song of the summer, but Norwegian duo Ylvis might have something more to say on the matter before the equinox hits. The Fox, by brothers Bård and Vegard Ylvisåker, has gathered more than 17 million hits after a week on YouTube. It was released in the lead up to the newest season of the band’s Norwegian television talk show,Tonight with Ylvis. They don’t have an album out yet, but after the overwhelming response several songs will be available on iTunes in North America next week.

Don't use plagiarized sources. Get your custom essay on
“ My Favourite Song What Does the Fox Say ”
Get custom paper
NEW! smart matching with writer

The catchy tune is paired with the most absurd lyrics this side of the theme song to DuckTales. The brothers muse on the sounds animals make (“Dog goes woof, cat goes meow”) before asking, “What does the fox say?” The answer is a series of horrific shrieks such as “Wa-pa-pa-pa-pa-pa-pa-pow!” and “Chacha-chacha-chacha-chow!” The brothers Ylvisåker dance in a forest at night dressed in fox costumes the likes of the Bloodhound Gang.

Proficient in: My Favourite

Ylvis isn’t new to the comedy music scene – they’ve been around since 2000 and have five other songs in English. Check out the arguably better Stonehenge, which begins as a mopey power ballad where a successful television show host is kept up at night ruminating on the ancient stone formation. In the past six days Ylvis have received offers for tours and record deals “from all the biggest companies,” a bewildered Bård Ylvisåker told Billboard, saying he and his brother had no idea how The Fox ended up on the viral radar.

“Normally, you know we get some hits and we get some comments, but they’re all about the actual contents of the songs. But this was mostly about the phenomenon, which was really strange, even when it was only at 100,000 views.”

My Favourite Song What Does the Fox Say. (2016, Apr 20). Retrieved from http://studymoose.com/my-favourite-song-what-does-the-fox-say-essay 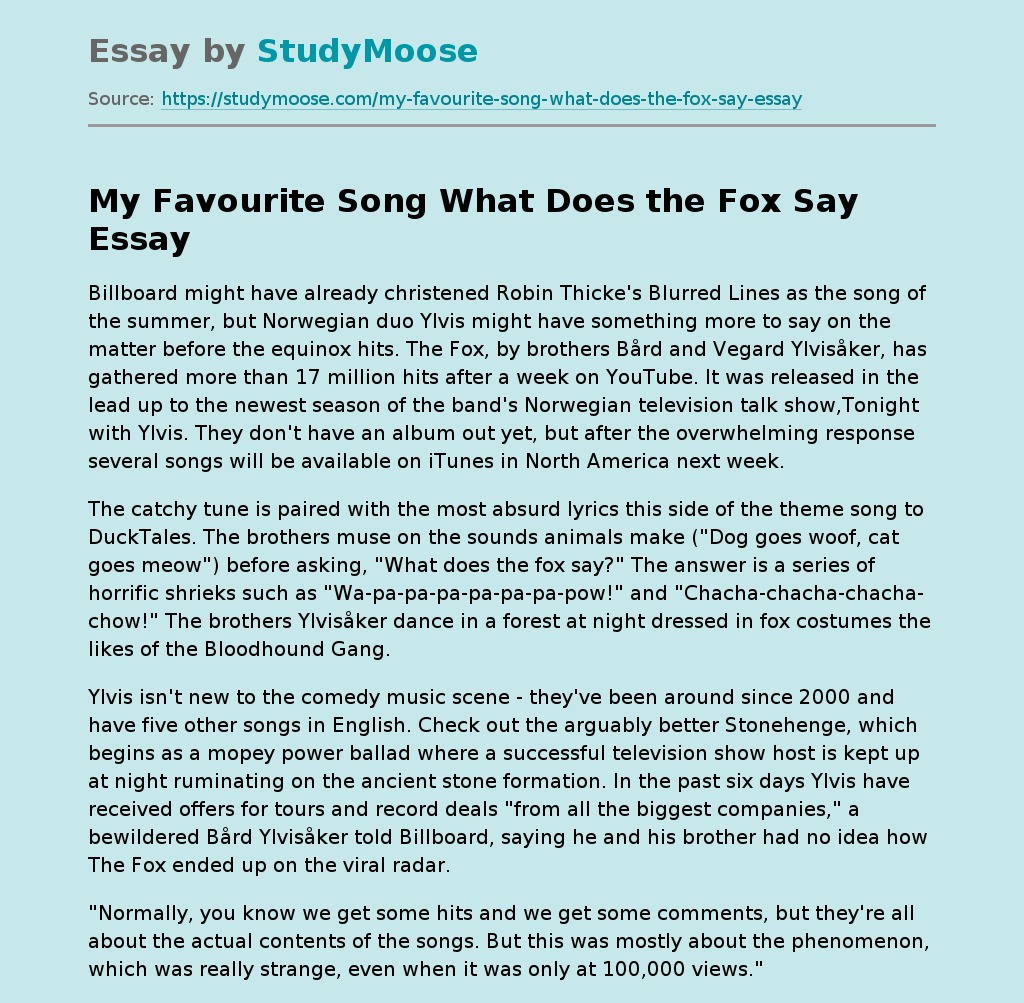