This is a story about the journey women face in cultures which does not give them the liberty of justice. The book ‘Breath Eyes Memory’ by Edwidge Danticat is about the journey of a woman as she faces the many hardships due to her mother and the culture that exists around them. The book deals with the relationship between the mother and the daughter and how both of their stories are intricately intertwined, as much as any of them wants the forces acting upon their relationship were created long before them and cannot be changed easily.

This story is about how Sophie Caco comes to terms with life and how she faces everything that she has to face and how it changes her.

One of the things which looms over Sophie and loomed over her mother is the ritual of ‘testing’. In this ritual the girl’s virginity is checked by administering a test. This test is a very painful process, much more painful emotionally than it could be physically.

One thing that this test reinforces when it is administered on Sophie is that her mother does not trust her. It also puts a lot of pressure on her because it becomes something she has to constantly worry and think about. One can even say that the test does the opposite of what it is supposed to be doing. Instead of letting Sophie mature like a normal girl it forces her to constantly think about her virginity and about how she is being oppressed and mistreated in her own home by her own mother.

One of the most telling things that comes at a pivotal point in the book is when she asks her mother why she administered the test to her when she herself had been harassed so much. This is a very important point which many people will miss unless they know how life is in countries with tradition heavy cultures. Most people think that men of these countries are the ones who prosecute the women for being free and keep them chained to tradition. The sad truth is that women of these cultures have as much of a part as any man. The reason is simple; they have been so brainwashed by tradition and culture and what happened to them when they were little girls that none of them stop to think about what they are doing and what consequences it might have for the little girl. Sophia’s mother says she will answer her if Sophia promises to never ask again. This is the answer she gets, “I did it,” she said, “because my mother had done it to me. I have no greater excuse. I realize standing here that the two greatest pains of my life are very much related. The one good thing about my being raped was that it made theÂ testingÂ stop. The testing and the rape. I live both every day (Danticat, 1998).”

This quote is very important because it reveals many things about the story. It tells us about how her mother thought it was abusive too yet because she had to go through it she was doing it to her daughter too. Many things can be said about this, maybe it was revenge, maybe a form of jealousy (if I had to go through it, why not her?) or something else. But the sword of tradition hangs over the head of these people. It also tells us about how she feels about the two greatest pains of her life, the testing and the rape and how she equates the two pains. While the testing may not have been as bad as rape it was still a horrible part of her life and as much as she hates being raped a part of her was relieved that she would not have to go through the pain of testing again. The rape was the point where it all stopped mattering; where no one would be suspicious of her and make her get tested again. She was finally free of the test. She also talks about how she has never outgrown the testing or the rape (She lives them every day). It means she carries the pain with her; not only the pain but the influence too. They way she lives her life, the woman that she became all had something to do with the testing and the rape. These horrible things are not something she can forget and she cannot claim that they did not have part in making her who she is today.

The testing manifests itself in another main point of the book where Sophie, finally realizing she cannot take any more of it decides to do something about it. She is tired of being tested and asked all the time. In a fit of emotion she takes her mother’s spice pestle and deflowers herself with it. As painful as the process is it is still better than being tested again and again. As she feels her maidenhood being broken she feels pain but she also feels free, thinking the act of breaking her hymen as “breaking manacles, an act of freedom” (Danticat). She knows it is the only thing she can do and she does it. While her mother’s testing stopped because she was raped Sophie would not wait for something bad to happen to her. She took control into her own hand and broke her own hymen.

This is also important because it tells us about the vast difference between Sophie and her mother. While her mother has resigned herself to fate and lives with whatever happened to her, Sophie has a much more active outlook towards her life. She wants to break free of the manacles of tradition and just make her own destiny. She will not inflict pain upon her daughter; she will not be like her mother. She is the one who breaks the cycle of tradition.

This was a very emotional book and a very telling one too. While it was enlightening for us I wish that this was read more by women who have to go through this. The little girls who still face this kind of treatment need to understand that they can break the cycle too if they want and make sure that this debauchery ends with their generation. I felt the book was very personal and raw and the story of Sophie going from innocence to freedom is an amazing journey that people should understand. This is a great book because not only do we understand the culture and the people within the book but we also understand the culture and the people of real life. We often wonder how people in some cultures can be so backwards and books like this help us understand, give us the answer. Only if we understand the reasons can we fix the problems. 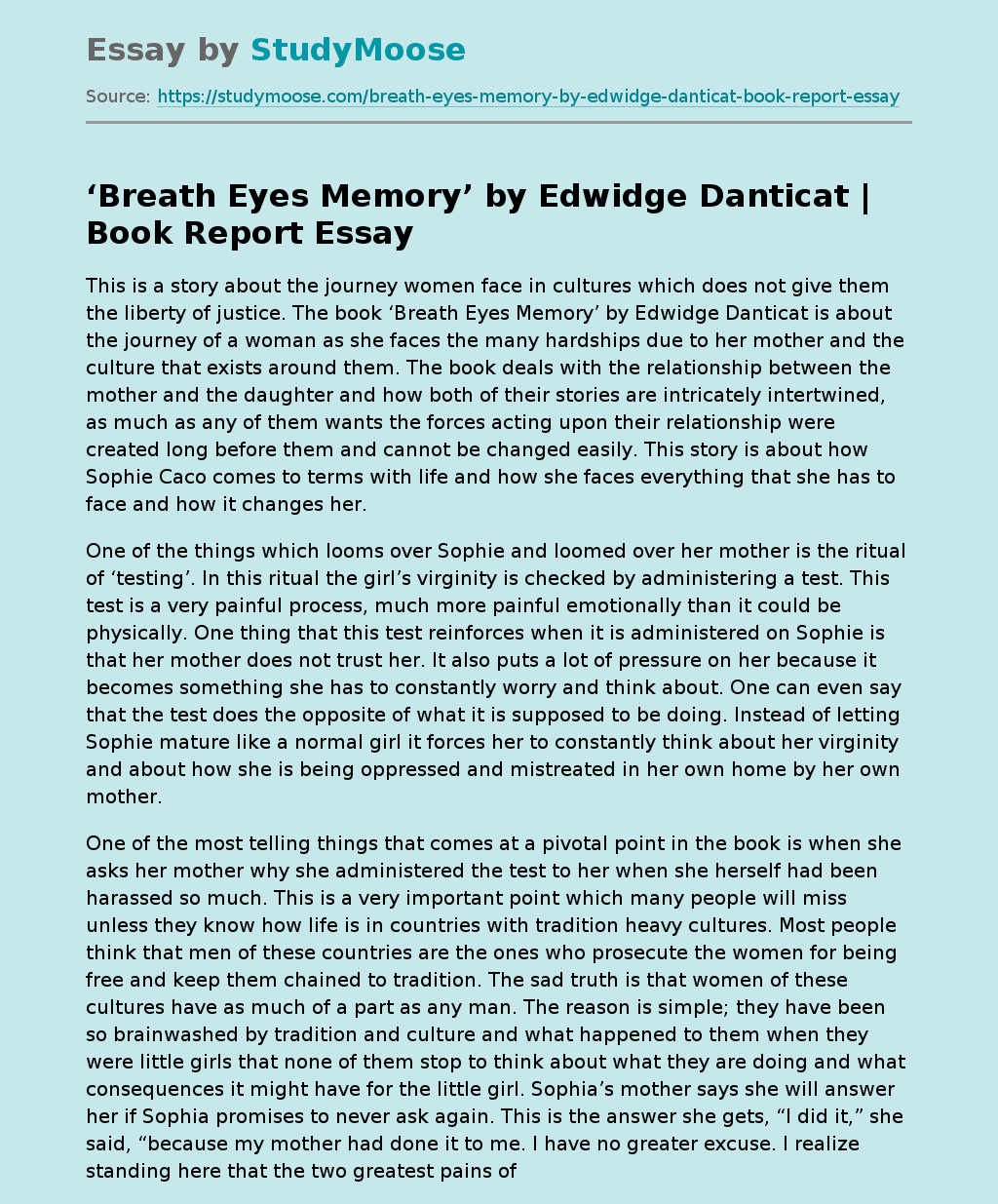