The Disney version of Pocahontas and the real story have many differences such as the romance, Pocahontas’ personality, and how the story ended. Disney has romanticized the tragic story of Pocahontas into not one, but two cartoons, with a target audience of children. And with deeply embedded messages into the plot of love and strength, many differences surface, showing off Disney’s ability to make a story of war, captives, and death a happy tale for children to enjoy. In the Disney version, the plot takes on a very dominant love story between Pocahontas and John Smith.

Don't use plagiarized sources. Get your custom essay on
“ My Favorite Cartoon Character Pocahontas Reel vs Real ”
Get custom paper
NEW! smart matching with writer

The two meet in the woods while John Smith, an explorer who came from England to the New World, is scoping out the land for savages. Pocahontas was intrigued by the new people who had encroached on her father’s territory. When their paths crossed and they met, Hollywood worked their magic and Pocahontas and John Smith fall in love. And like any good love story there were obstacles in the way of their relationships.

Like Pocahontas’ father warning his people to avoid the new “white people”; Pocahontas was engaged to Kocoum; and John Smith’s crew believed that all Indians were savages. But the two overcame all the obstacles in their way. Kocoum was killed by a crew member of John Smith’s and John was captured by the Powhatan tribe and was sentenced to death. So Pocahontas saved John’s life and made peace between the colony and her tribe.

As romantic as the Disney version is, the true story takes a much less Hollywood love story route.

When John Smith and Pocahontas met, they hardly would have considered “love”. According to dates and records when, or if, John and Pocahontas met a relationship would have been inappropriate due to Pocahontas age. Not to mention a white man falling in love with a “savage” was highly unheard of in that time. So the John Smith and Pocahontas love story from the Disney movie is simply a work of fiction. But in 1613, Pocahontas was captured and held for ransom by the English. During her time with the English, one of her captures, John Rolfe, took a liking to her and issued her release on the condition she marry him. Whether she truly loved him is unknown. So Pocahontas, to create a truce among the colony and tribe, married John Rolfe and was baptized as Lady Rebecca. Rebecca and John moved back to England and had a child name Thomas. Throughout the Disney version, Pocahontas’ character is developed very quickly.

The movie portrays Pocahontas as a very strong individual. She did what she wanted and when she wanted, like leaving to see John Smith when her father had told her to stay away from the new people. Pocahontas was also portrayed as noble and very wise. She had brought peace to two feuding colonies, which is a big task for a teenager. Beyond that, Pocahontas was a very spiritual girl, she was very empathetic to animals and nature, as well as possible shamanic power. Pocahontas believed in spirits and prophecies, she also sang a song to John Smith saying how everything was important and should be valued, like the bear. Also she could talk to Grandmother Willow, who was a tree, lending itself to shamanic power. And John Smith also listened to her, which shows Pocahontas as a highly respected woman. Pocahontas Was very highly regarded, people listened to her, like her father the chief. But as well as being a strong woman, she was also a beautiful young girl, which people, her people and the English, notices and appreciated.

In the movie, Pocahontas is seen as a very strong individual, but in the real story was not as brave or noble. Pocahontas’ true name was Matoaka, which means “naughty one” or “spoiled one”. Like in the movie, she was a part of the Powhatan tribe and was the Chief’s daughter. What the movie didn’t mention was she had several siblings and her mother was a Chief’s wife. Someone who gave the Chief a child and then remarried with little contact to their child and then remarried with little contact to their child. But the biggest difference is that in the real story Pocahontas/Matoaka was not the “main character”. Pocahontas had small influence on the story and was merely the Chief’s favourite daughter. Pocahontas only became a part of the “story” when she was captured by the English. She never actually helped in the battles between the English and her tribe. Disney’s version of Pocahontas has gotten about three hours to be told between the first and second movie.

The first movie ended by Pocahontas bringing peace to the colony and her tribe. She did that by saving John Smith’s life and making a huge speech about equality. The tribe agrees and so do most of the Englishmen. But Governor Ratcliffe tried to shoot Pocahontas, but instead hit John. It ends by John being brought back to England wounded, and asking for Pocahontas to come back with him. She says no and watches his boat sail off. And in the second movie it ends by John Smith asking her to leave England and sail “the open seas”. Again Pocahontas says no because she would rather go home. When she boards the boat she notices that John Rolfe was on board. During Pocahontas’ adventure in England she realized she loved John Rolfe. So the two happily sailed off to Jamestown Virginia, roll credits.

The actual ending for Pocahontas’ story took a much darker turn than Disney. Like in the movie she does “end up” with John Rolfe. But as stated earlier, Pocahontas was captured by the English and held for ransom. During the time spent as a captive she was taught English and baptized as Lady Rebecca. She married John Rolfe and they moved back to England. Pocahontas became a celebrity as the “civilized savage”. Pocahontas and John had a child and named him Thomas. Then in 1617, right before setting sail to Jamestown, Pocahontas died at the age of 21. The Disney version’s ending was much more “happily ever after” but the real version ended as every bodies story ends.

The Disney version of Pocahontas has many differences from the real story and is highly inappropriate because it turns a tragic story into not one, but two cartoon movies, for children. The many differences include romance, the character personality of Pocahontas, and the ending of the story. Overall, the real story is much darker than the Disney version. 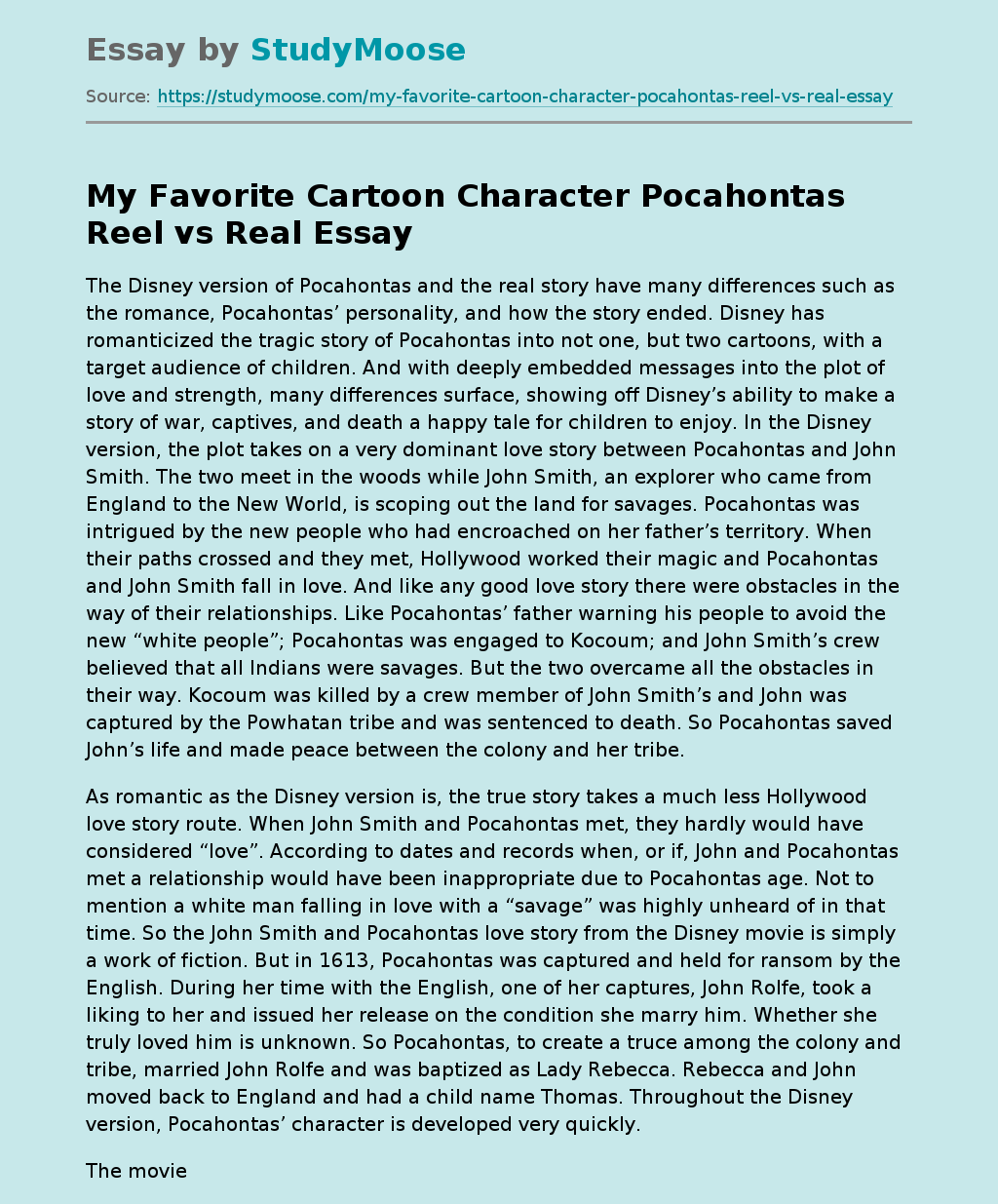