Over time the Mongolian army has become synonymous with the term barbarian. The definition of barbaric is unsophisticated, primitive, and savagely cruel. These terms do not give the Mongols enough credit. I believe that they were not completely barbaric though they did have some brutal techniques. They were advanced strategists for their time period. The Mongolian army was run with a strict command and heavy emphasis was placed on living by the rules that were set in place.

Their army was conducted a specific way and there was no room for noncooperation.

A basic 10 grouping system was instrumental in being able to control such a large mass of warriors (Doc 2). The same principle of how few can rule many also contributed to a successful and trained army: they used fear. All cowardice was extremely frowned upon and almost always ended in death. If three or more of a group of ten warriors fled the battle, all ten were killed. If a whole group of ten ran away, the entire group of one hundred was killed (Doc 2).

Since the Mongols were strategists, they knew that battles tended to last many hours and even days. They would send their warriors to fight in shifts so as to keep up the strength and power of their army and not lose simply because they ran out of energy (Doc 3). There was no tolerance for anything that was not the best and it certainly paid off. They were sophisticated enough to know that groups of many learn by example and had to be firm in their control.

The Mongols had many rules. Rules and laws helped with keeping order and structure in such a huge empire. Many of them were as obviously common sense: “The whip isn’t yours? Don’t touch it” (Doc 7). Simple rules like that aided in rooting out theft on any scale. Two of the main topics that laws concerned were hospitality and adultery. The Mongols had taken hospitality to the next level by putting it in writing that even if you have to go days without food, your guest will eat plenty and you will act as though you are full (Doc 10).

A stranger anywhere in the Mongol empire never needed to worry about lodging or necessities with a set series of laws like the one previously mentioned. Another important topic addressed was adultery. Adultery was no joking matter to the Mongols. Anyone guilty of committing it was executed – no exceptions. A married woman in Mongolia was not to be touched under any circumstances even if she was captured. Her captor had to kill her husband before beginning any relations with her (Doc 10). Transgressions against Mongolian laws were not taken lightly: this way of ruling was definitely beneficial to its success as a dominating empire. There is nothing savage or cruel about order.

Given all of this information, it is difficult to see how the Mongols could be categorized as barbaric and primitive. Though they did have ruthless methods of attack, they were tacticians above all else. In more ways than one the Mongolian empire was ahead of its time in laws and structure. To find out who the true barbarians are, it is all about perspective. 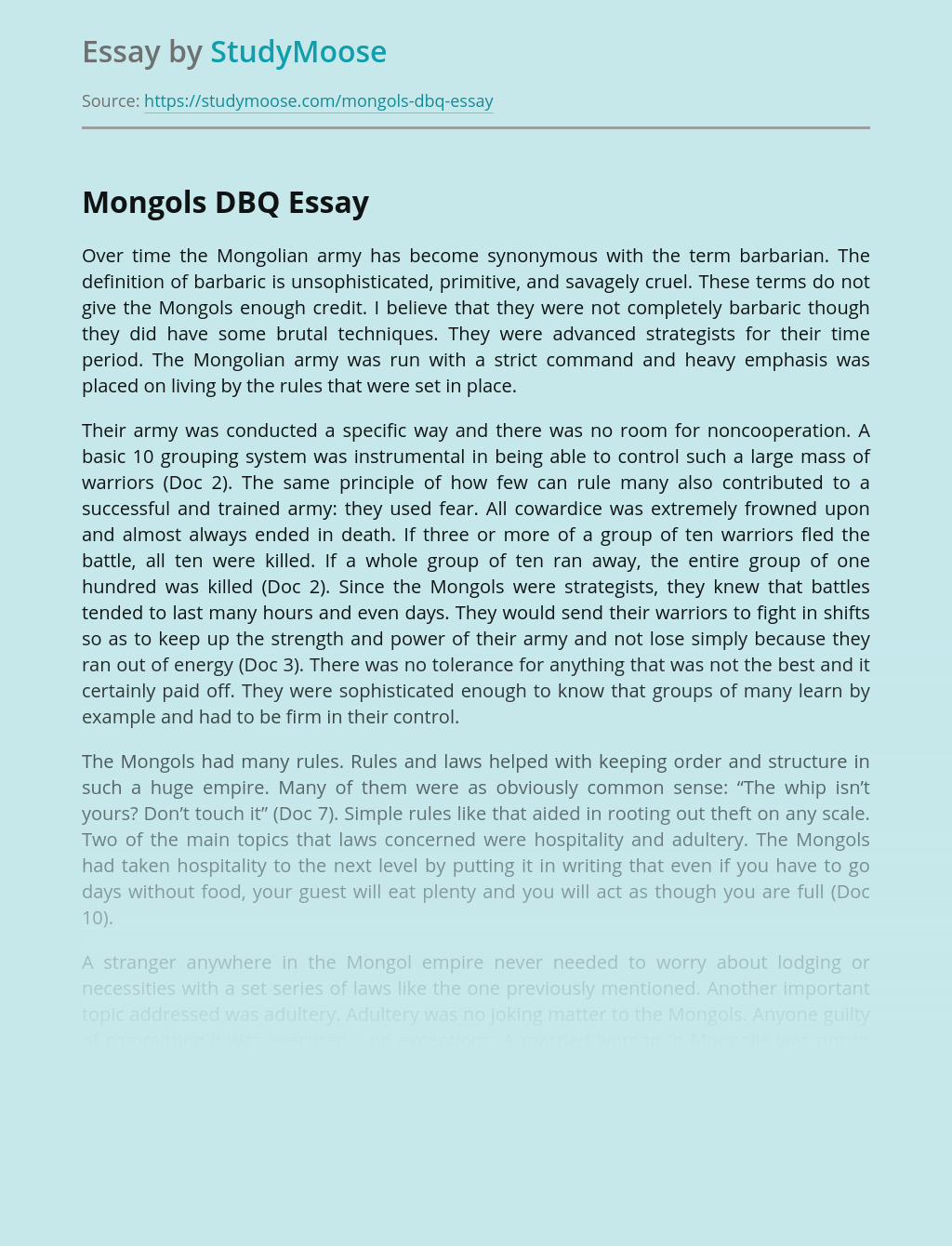 Don’t waste time
Get a verified expert to help you with Mongols: Culture and History
Hire verified expert
$35.80 for a 2-page paper
Stay Safe, Stay Original