Money Can Not Buy Happiness

Do you believe that your income is the main factor in determining your happiness? It is a classic debate that has reached its tentacles into the minds of our nation’s individuals and wrapped itself firmly around their minds having them strive for happiness. Money does not buy happiness. Too many Americans are so blinded by their own ignorance that they constantly pursue happiness as if it was a matter of circumstance rather than their own perspective. Such a way of life is crippling to those individuals because they miss the plethora of opportunities for happiness that surrounds them in every way of life.

Don't use plagiarized sources. Get your custom essay on
“ Money Can Not Buy Happiness ”
Get custom paper
NEW! smart matching with writer

They may even argue that money allows one to be charitable to others.

Those who make these arguments have the wrong perspective of the world. Those who argue that many buys happiness and those who live their lives in such a manner can never really attain true happiness. Clearly, these people who are striving to make money are really just striving to be happy. They dedicate their lives to being happy and thus place very significant value on being happy.

One study attempted to determine the paradoxical effects of valuing happiness. It concluded, “valuing happiness could be self-defeating, because the more people value happiness, the more likely they will feel disappointed“ (Savino et al. 807).

Furthermore, those that argue that happiness allows us to live carefree lives by removing the burden of financial strain need to change their perspective in order to truly be carefree. People living life in such a manner are never truly carefree because they constantly have the stress on them to be making more money in order to live a carefree lifestyle. Such a conditional “happiness” is not truly carefree.

Rather than living life in such a manner, people should remove the excessive stress of making money and appreciate their own respective situations. That certainly beats caging the circumstances under which they can thrive and be happy to only being included in a specific income bracket. Basically, put less value on how you regard happiness. “Valuing happiness may lead people to be less happy just when happiness is within reach” (Savino et al. 807).

Individuals who believe that money can buy them happiness may believe that money allows them to buy certain objects or allows them to have certain experiences that allow them to be happy. However, one study showed, “… that happiness seekers voluntarily choose to practice up to eight happiness strategies at a time suggests that by experience or instinct they have discovered a successful approach to the pursuit of happiness” (Lyubomirsky et al).

However, there was little correlation between the application of these happiness seeking strategies and an actual real-world application’s effect on a boost in well being (Lyubomirsky et al). There is close to no correlation between activities or objects that “happiness-seekers” seek to buy and their own happiness. Rather than believing you can buy happiness with your money, one should perhaps try helping an old lady cross the street. The good feeling in your belly after such a kind and gracious act is true happiness.

Raymond Angelo Belliotti argues that, “…leading a robustly meaningful, valuable life merits worthwhile happiness. But worthwhile happiness does not automatically follow from such a life. If we must choose, a robustly meaningful, valuable life is preferable to a merely happy life…” (Belliotti). I completely agree with Mr. Belliotti. However, I believe that placing value and finding meaning in all that we do will correlate to a happy life. Finding meaning in what we choose to do can be the true pursuit of happiness that attains happiness. Thus, it is the pursuit of meaning and value rather than a pursuit of money that gives one happiness.

Throughout history, the adage that money does buy happiness has been disproven. If this argument was true, then the argument would be made that serfs, peasants, and all poor or financially unprivileged individuals throughout history were unhappy. However, when put it such a broad context, that argument seems ridiculous. Throughout all of history, individuals found happiness in love, their families, their religions, their surroundings, their countries, etc. Uncivilized human beings who had no concept of money probably found much more happiness in all that they did because they lived without the shackles of the concept of money.

One fascinating study was conducted that may silence those who believe money can buy happiness forever. “This study provides the first evidence that money impairs people’s ability to savor everyday positive emotions and experiences. In a sample of working adults, wealthier individuals reported lower savoring ability (the ability to enhance and prolong positive emotional experience). Moreover, the negative impact of wealth on individuals’ ability to savor undermined the positive effects of money on their happiness” (Mikolajczak, et al).

This study clearly demonstrates the inability to have a prolonged positive emotional experience in wealthier individuals. This study literally states that money cannot buy happiness in other words. Furthermore, it goes on to say that those who have money actually tend to be less wealthy. This study gives evidence that could give so many people so much happiness if they applied it to themselves and stopped believing that money could buy happiness.

For example, thinking outside the box, volunteering at homeless shelters, helping the elderly, helping individuals around you in need on a daily basis, planting trees, etc. all have great benefits and can help the lives of many people! All you really need to do to be charitable is ask yourself what it is that interests you and put your efforts into pursuing that charitable task!

In conclusion, money simply does not buy anyone happiness. Happiness is a result of our perspective and how we see the world around us. People have found happiness is the worst circumstances imaginable. Many stories are told of those who survived the holocaust who put all their efforts into finding some piece of beauty around them in order to be happy. Something as simple as appreciating the sunrise can make someone happy. Happiness is not limited to high net worth individuals. Happiness is not reserved for the people who have money.

Happiness is a human emotion and experience that is engrained into who we are as living creatures. Living things all around us experience happiness. My dog literally does not have a penny to his name (unless he has been stashing hundred dollar bills that I am unaware of), and literally is one of the most joyful things when he is taken to the park to run around with his owner and the other dogs. Happiness surrounds us in everything we do, it permeates every situation, money does not buy it; it is only attainable when you realize it was always there in the first place. Just reach out and grab it.

Money Can Not Buy Happiness. (2016, Apr 05). Retrieved from https://studymoose.com/money-can-not-buy-happiness-essay 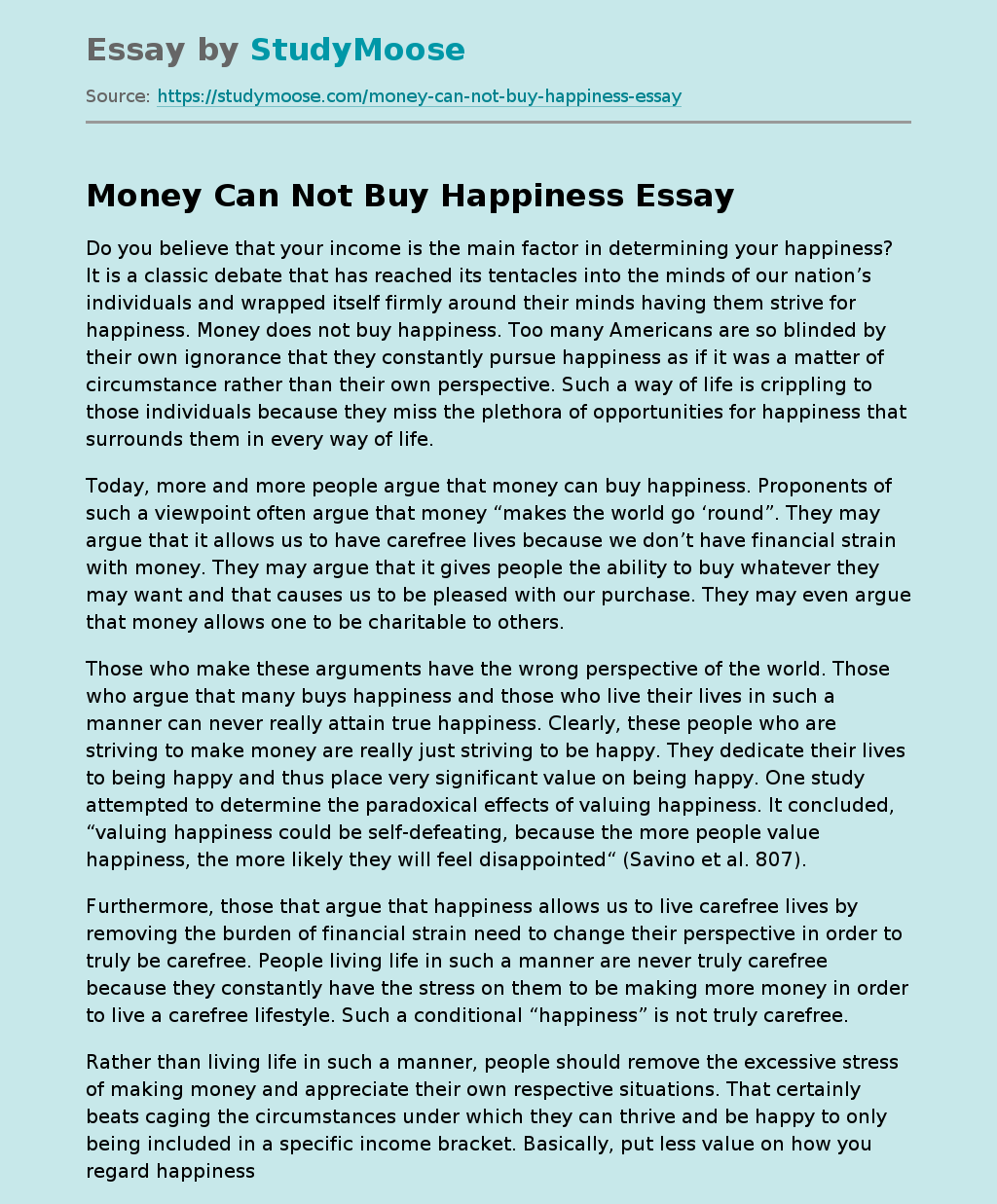