The relationship between money and happiness

The relationship between money and happiness is strange, because as human beings our happiness does not necessarily depend directly on money. Human beings depend on primarily water, food and oxygen, as well as other psychological factors which affect our mental state. Money is certainly not one of the primary factors which affect human life, and how much money we have compared to other people is such a relative concept that it affects a concept of happiness, with no absolute truth to it.

Don't use plagiarized sources. Get your custom essay on
“ The relationship between money and happiness ”
Get custom paper
NEW! smart matching with writer

Humanity is not bound by the need to accumulate wealth at least it wasn’t thousands of years ago, however in today’s world it is seen as a social stigma to not have as much money as other people. The amount of relative wealth we have compared to others is seen to be the major indicator of how happy we are? If this is true then this argument depends on money being the deciding factor on how happy we as people are, instead of the other things we could be doing instead of working.

The psychological perception of happiness is about the difference between being content and being unhappy, and under this perception having more money is not an issue, because of the external factors affecting happiness which are not based on wealth creation and accumulation. The monetary system has been in place for thousands of years and has developed from a simple barter system, to a system based on the exchange of precious metals, to what is in place today.

Looking at the system which was used for the exchange of goods and services thousands of years ago, money and the accumulation and storage of this object was not an issue to people on Earth. If something was done by someone for someone, something was given back in return. Usually this exchange was a simple one, involving the two parties who agreed between them how much the service was worth in relation to the item being received for the service.

The onset of a monetarist system where a central organization was created to regulate the worth of goods and services against a standard currency of exchange is where some of the problems began when talking about happiness and money. Certainly if you possess more wealth, then you have more opportunity to be happier than someone who has no wealth, however someone with no wealth may have a psychologically different perception of happiness, and be happy while possessing no material wealth while the person with all the money may be suffering from severe mental depression and psychological issues.

Dwight Lee agrees with this idea and reflects that “Surveys asking people how happy they are indicate that the average level of happiness has not increased over several decades, despite large increases in income per capita”(Lee). A very valid issue has been raised here, in that it is irrelevant how much money is in circulation, and how much of this money people have, because happiness is created under conditions which are separate from the wealth creation system as are the circumstances that people live under in order to aim for wealth creation as a fundamental goal of their lives.

Under this particular circumstance a person with no money is much happier than a person with a lot of material wealth. The opposite situation may also be possible, that someone with no money is psychologically unhappy, for one reason or another that may not be due to financial reasons, but the argument stands nonetheless, someone with lots of money may be happy. This point is crucial to the distinction between money making happiness or not, and whether the economic definition or the psychological definition is the most important to consider.

Therefore in conclusion it is possible to say that yes, in some ways money can buy happiness, however in others it cannot, and in each case the psychological not economic measurement of happiness is important to consider, as human beings are all unique and have different factors which affect happiness in different people. 2. In today’s world, money is such an important factor when considering life on Earth. In order to survive, food, water and shelter are needed, as basic human necessities.

Money is not necessary if you own your own land, with a house, some plants and animals to provide food, and access to water. However due to increased economic expansion, a subsistence existence is not an option for millions of westerners, who live a fast paced and highly stressful life, pursuing this goal of wealth creation and accumulation. Therefore under these conditions, it is absolutely essential that people pursue money and the accumulation of it. However it is possible to opt out of this kind of society and adopt a sustainable, subsistence lifestyle, in which money is not needed.

Lee argues that without the pursuit of money humanity would “would choose to occupy the slow lane, to catch a few fish or grow a few vegetables or raise a few chickens, spending most of their day enjoying their family and friends” (Lee). Whether this is probable for a large percentage of the western population is a different matter, however it is possible. Economic concepts along with fiscal and economic management of the economy in which a person lives dictate how essential it is to pursue money as a driving force behind their life.

In an economy with low opportunity cost, it is possible to live a very simple lifestyle, and not suffer from psychological happiness issues. However in a fast paced and highly developed economy the opportunity cost for simple goods and services becomes by definition much higher. Therefore it becomes more of a struggle for workers in this kind of economy to accumulate and store their wealth, and as such they become embroiled in a constant struggle to achieve the amount of money needed for existence, let alone for a relaxed and highly pleasurable lifestyle with holidays and high quality restaurant food every day.

Living in a country where opportunity cost is very low seems to make happiness a much more achievable economic outcome than in a highly developed and expensive one. 3. Households demand money in order to purchase goods and services, however this standard of living measurement is not the only way to measure the levels of happiness or contentment with an environment, and there are other factors to consider that may also contribute to a good standard of life.

Having a job or at least a simple self employed business opportunity is another factor which can contribute to the general happiness levels and potentially causes a higher standard of living being realized. A way of measuring this as a contributing factor to the standard of living is to look at the employment figures for a country. A country with limited opportunity may well have a lower standard of living than an economy with very high levels of employment. The presence of a job in a person’s life causes them to reach higher levels of motivation and satisfaction with their own life than someone who is unemployed or unemployable.

Richard Easterlin agrees with this point and confirms that “the implication is that one can improve one’s life satisfaction by getting more money, and that public policy measures aimed at increasing the income of society as a whole will increase well-being”(Easterlin). The other determinants of a happy population also depend on the general living conditions of a country, the environment, the weather, the success of a football team, and other such broad sociological issues which affect peoples’ happiness on a day to day basis.

The relationship between money and happiness. (2016, Sep 08). Retrieved from https://studymoose.com/the-relationship-between-money-and-happiness-essay 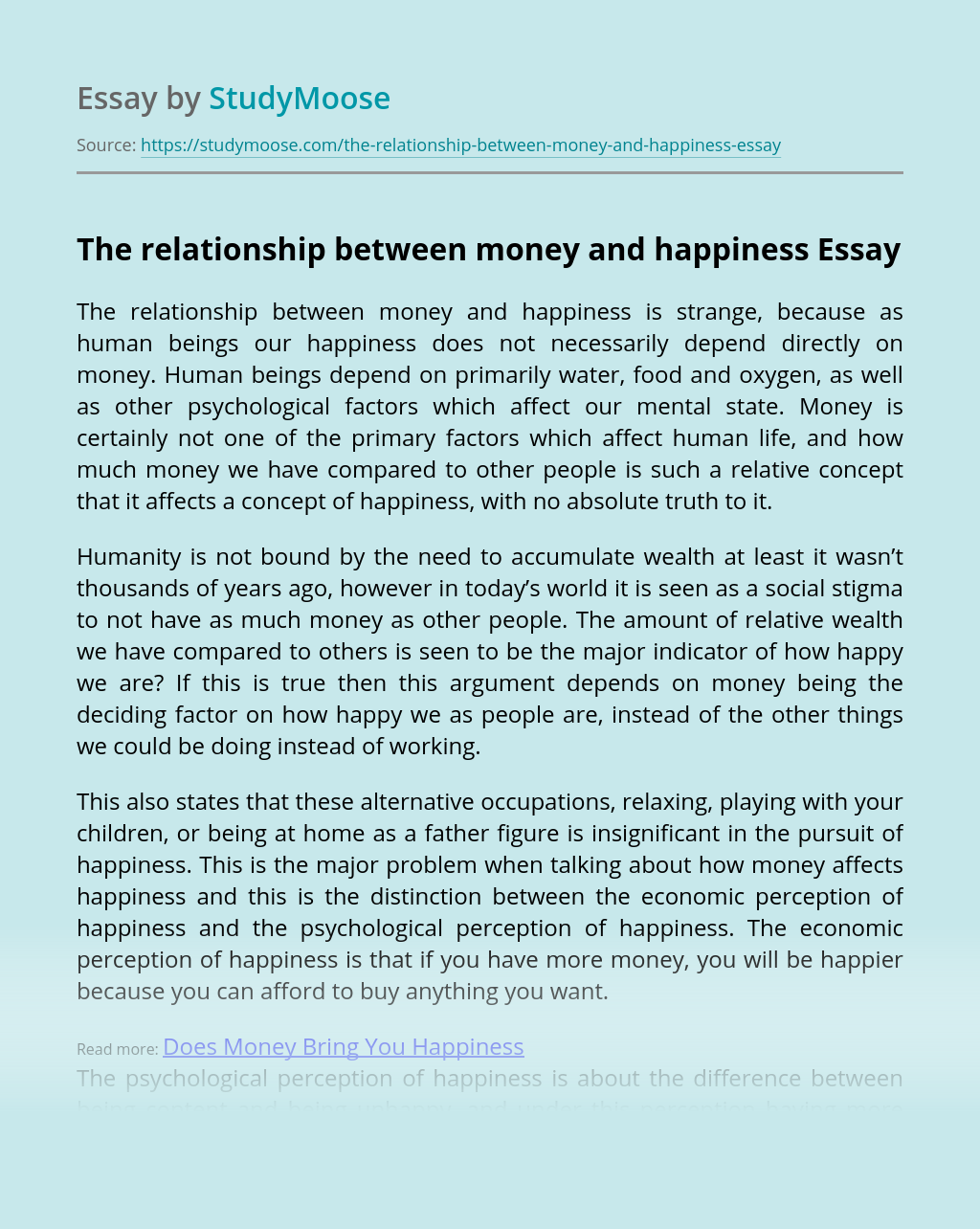