+84 relevant experts are online
Hire writer
Turn in your highest-quality paper
Get a qualified writer to help you with
“ Moment of Inertia ”
Get high-quality paper
NEW! AI matching with writer

The point of motion is basically defined as the relationship between mass and the perpendicular distance to the rotational axis.

(1)
The moment of inertia of any extended object or rather a continuous mass is built up from the same basic principle.
(2)
The general form of the moment of inertia involves an integration of the mass relative to the axis of rotation.
(3)
Density is mass per unit volume,, where the density of the body is uniform.
(4)

Moment of Inertia of Hollow Cylinder or Ring

Given the expression for the moment of inertia (4) deriving an equation of a hollow cylinder where,

Of which equation (6) can be simplified in terms of the mass in the formula of the density. Where, therefore concluding,
(7)

Moment of Inertia of Disk

But instead of limits from to, the limit is set from zero to.

(8)
In which and therefore concluding the moment of inertia of a solid disk is,
(9)

Torque measures how much force is acting on an object that causes it to rotate. Torque is equal to force multiplied by the lever arm.
(10)

Consider a rigid body that is consists of particles at different distances from the axis of rotation, which is acted upon by an applied forced F. By taking and multiplying Newton’s second law of motion by R in both sides that yields,

Tangential acceleration a is equal to the product of radius and angular acceleration α, where and
Since, Then, Newton’s second law of motion for the rigid body is,
(11)

Experimental Value of Moment of Inertia

Considering the figure of the experimental set-up, given the forces that affect the whole system necessary to accelerate the disk and ring equals the difference between the weight that is being added and the tension of the thread.

Thus, the experimental value of moment of inertia is
(12)

A. Setting-up the Equipment.

Fig. 2: a) Setting-up the equipment, b) Overcome kinetic friction, by a friction mass.

B. Determine the Moment of Inertia of Disk and Ring. Place the ring on top of the disk in order to obtain the acceleration of the whole system. Use a vernier caliper to determine the measurements of the radius of the disk, the ring and the shaft.

In this experiment there should be a friction mass involved in every trial, making it move at constant speed. In order to test whether the speed is constant, use the smart timer of which the acceleration is zero. In every trial add constant masses and obtain the acceleration to compute for the experimental value and compare it with its actual value.

Fig. 3: a) Friction mass should be at constant speed, b) Getting the moment of inertia of Disk

E. Determination of Moment of Inertia of Disk rotated about its diameter.
Doing the same method in part B, only this time the disk is set perpendicular to the mounting rod by inserting the D-shaped hole to the shaft.

Fig. 4: a) Disk perpendicular to the mounting rod, b) Same procedure to be applied in getting the moment of inertia. Results and Discussion In this experiment, the main objective is to compare the experimental and actual values of the moment of Inertia of the disk and the ring. By formula, the actual value can be obtained. It is important to obtain the moment of inertia of the hollow and the disk rotating about the axis of symmetry. The analysis of obtaining the desired value is shown below.

In this part of the experiment, it is task to obtain the moment of inertia of ring (rotated about the center). The value for this may be obtained by formula similar in obtaining the moment of inertia or by merely subtracting the value of Idisk from the Itotal which are also both computed before. Since there is no difference between the actual and experimental value the percent error is zero.

The results in determining the moment of inertia when rotated about its diameter. In this part of the experiment, three trials were also made.

It may seem unnoticeable for the radius to be the factor that carries the greater moment of inertia in observing the actual experimentation considering the partial greater mass that another object obtains, but what is also important is the fix axis of rotation where the object is being motioned. That is why it is considered to measure the radius starting from the center rather than getting the whole diameter of the disk and the ring. Another is getting the diameter can lead to inaccurate measurements.

The moment of inertia is not only to the mass and the radius of the rigid body but it is also dependent on the axis of rotation. That is why if the mass of a particular rigid body is said to be constant the moment of inertia is not constant. For the rotational analog it is not in uniform angular motion. In the experiment this was demonstrated by getting the acceleration or the change in velocity.

To further elaborate the theorem, the summation of the mass times the square of perpendicular distance of particle from axis of rotation are the factors that affect the moment of inertia of a rigid body. So it depends on the chosen axis, the shape, and density of object.

Torque is reason why the rotational motion changes. Torque is also dependent to the axis of rotation defined by or the moment of inertia times the angular acceleration of the rigid body as in to goes into linear or gravitational motion. 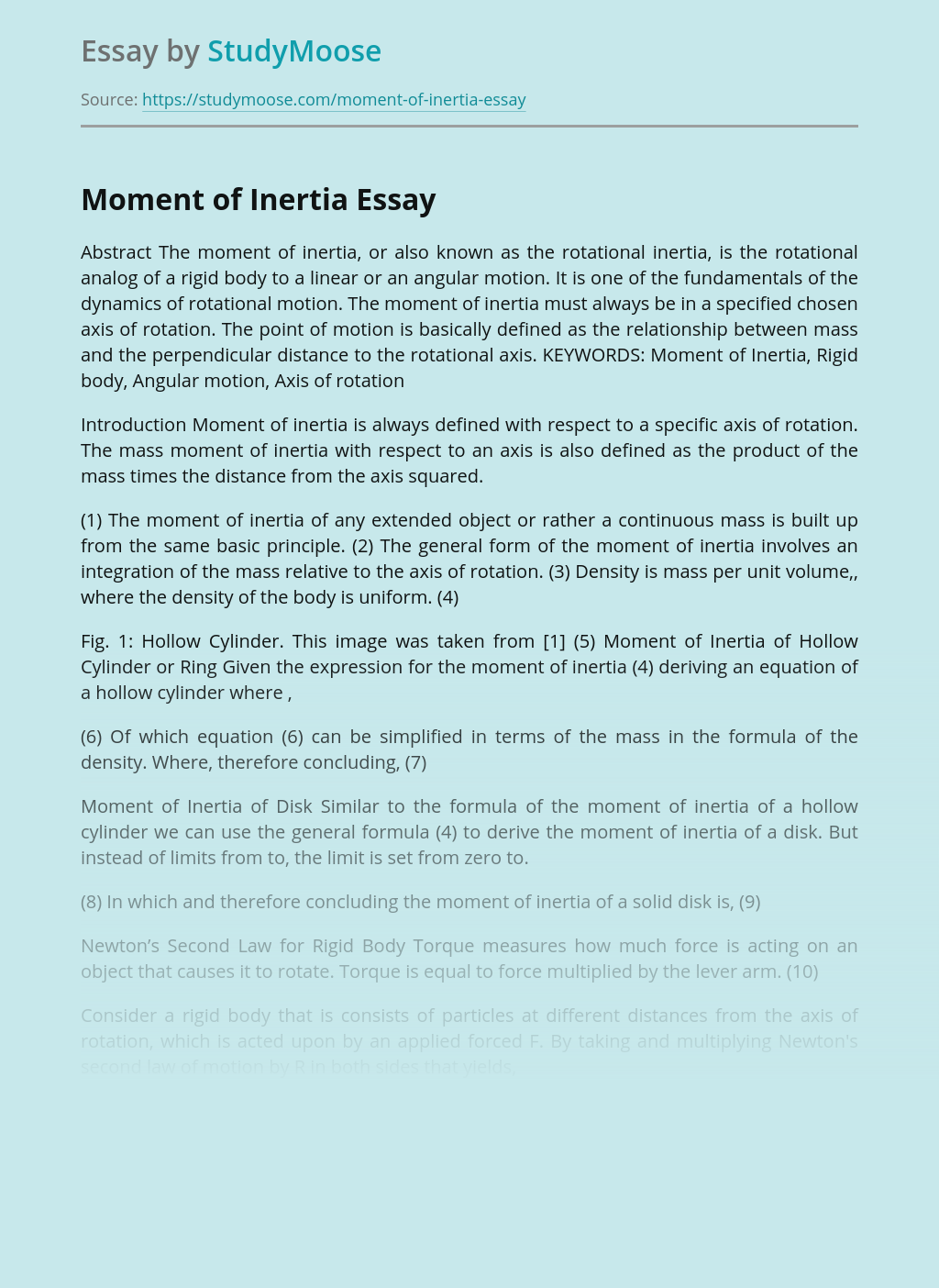 Turn in your highest-quality paper
Get a qualified writer to help you with
“ Moment of Inertia ”
Get high-quality paper
Helping students since 2015
Stay Safe, Stay Original