There are a plethora of sports being played across the world. However, only a few sports ever manage to catch the eye of millions of followers, globally“Mixed Martial Arts” or MMA has been quickly racking up viewership across the world; viewership that is increasing on an exponential level, year after year. The event to be hosted involves a majestic and for the first time clash of two rival MMA fighting clubs, namely UFC and Strike Force. The two top heavyweight fighters of the two clubs, Brock Lesnar and Fedor Emelianenko, respectively would collide for the first time in front of a packed MGM Grand Garden Arena.

Another event to be held at the halfway duration is a charity event (concert) for the purpose of collecting donations for American War Veterans and their rehabilitation. The concert is supposed to be performed by none other than former Navy seal, Shaggy. The event is slated to generate a lot of revenue from ticket sales, sponsorships, and merchandise sales.

Introduction and Objectives There are a plethora of sports being played across the world. However, only a few sports ever manage to catch the eye of millions of followers, globally.

Traditional sports like Soccer, Basketball, Boxing, etc. have been the mainstay of the sports world for many years; however, this is changing rapidly due to a new upcoming sport. “Mixed Martial Arts” or MMA has been quickly racking up viewership across the world; viewership that is increasing on an exponential level, year after year. The history of MMA can be traced back to early 1900s throughout Japan, Europe, and the Pacific Rim.

Even during the Roman times, statues of fighters were put up throughout the empire.

Ultimate Fighting Championship or (UFC) is the main sports event held numerous times a year, pitting world-class MMA fighters against each other. On November 12, 1993 the first UFC event, called UFC 1 was held (Strickland, www. entertainment. howstuffworks. com). The objective of this paper is to host an MMA fight between Brock Lesnar and Fedor Emelianenko. Brock Lesnar is the reigning heavyweight champion of UFC while Fedor is the heavyweight champion at strike force.

Both fighters have been termed as the most deadly fighters in the history of MMA. Fight fans are yearning for a fight between these two, and this is what is proposed to be done in this event management plan. Even UFC president, Dana White, has said that he could make that happen. (www. mmafighting. com), (www. strikeforce. com). The arena is expected to have around 1 restroom per 50 spectators. Since it is the MGM Grand, it is expected to have full facilities available like Press Box, Commentator Box, and other facilities.

The revenue generated from sponsors and sale of other UFC memorabilia is additional (www. fightline. com). Facility Management The facility management would be done by dividing the managerial positions into the following: Figure 2: Facility Management Chart (www. wiki. answers. com). General Manager – The role of the general manager is to take the first step and arrange the necessary facilities and approvals to make sure the event goes ahead as planned. The general manager is supposed to talk to all the relevant authorities before an event goes ahead.

In the event of arranging a UFC & Strike Force event, firstly the approvals need to be obtained from UFC president Dana White and Strike Force president Scott Coker. This would be not a big task since both the presidents of their respective championships want to arrange a fight between their fighting championships to prove their mettle. Once the permissions are obtained, the next step would be to contact the management at MGM Grand Garden Hotel to ask for permission rights.

Since the MGM Grand has been hosting various UFC events like UFC (40, 49, 54, 56, 66, 71, 84, 91, 92, 94, 98, 108, 114,116), there wouldn’t be any problems in hosting an event over there, this around as well. After the acquisition of permissions from the presidents of the two fight clubs and the MGM Grand management, the next step would be to ask the sponsors. A lot of Sponsors provide heaps of cash to have their names placed inside the octagon as well as called out before the start of each main event (title fights). Thus, the sponsors alone would help in covering up a lot of costs of arranging the event. 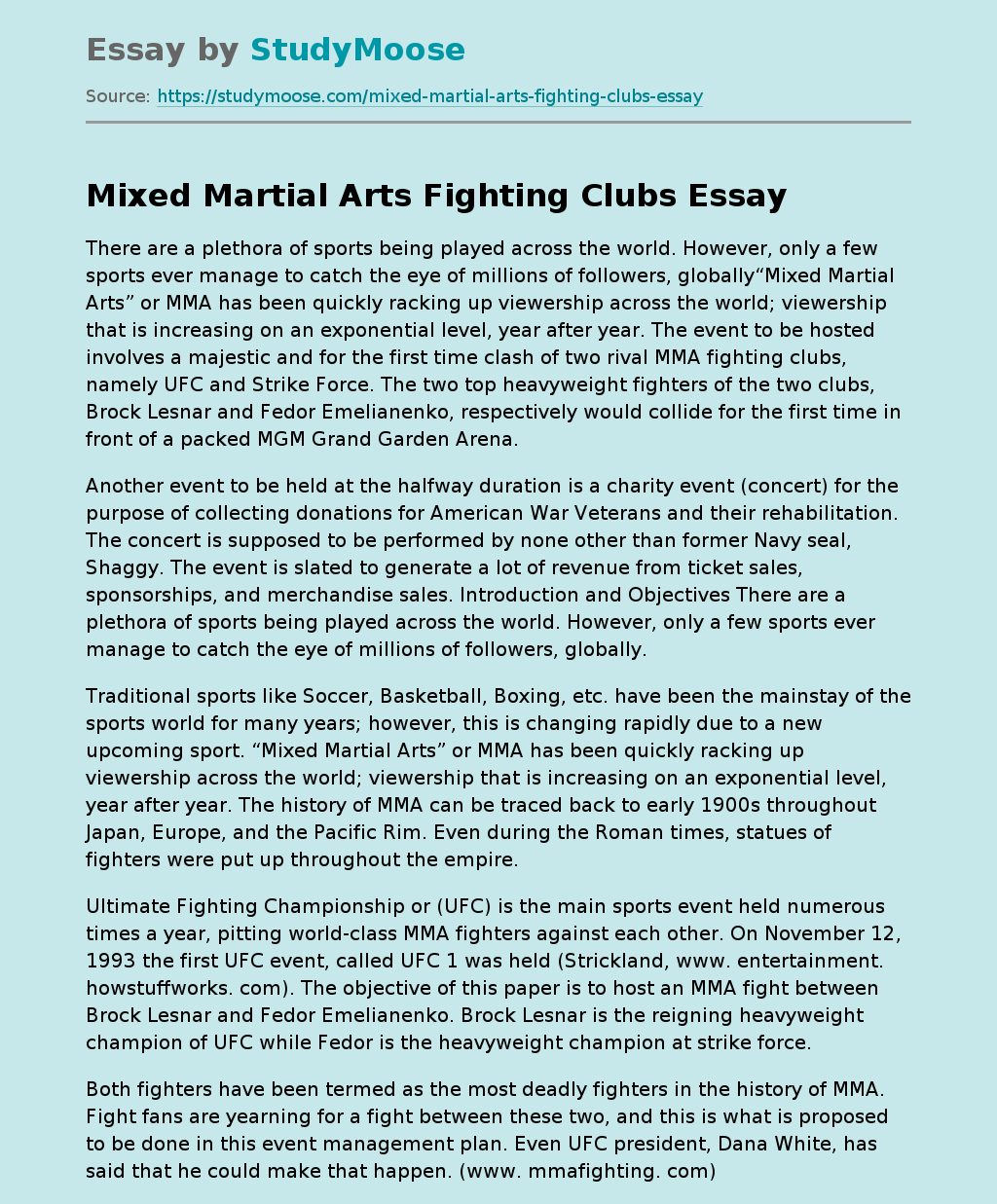