The Miner’s Wives by Ben Shahn takes a bitter look at one of the lifestyles of the early 20th century – that of the down-trodden coal miner.

In the foreground of the picture, we see the miner’s wife referenced in the title. She carries a bleak expression, her back turned to an older woman and a child, presumably her mother and her offspring. Two men walk away into the distance, and one set of clothing hangs above, unclaimed by its owner.

Don't use plagiarized sources.
Get Your Custom Essay on Miners’ Wives by Ben Shahn Just from $13,9/Page

The woman has just been informed of the mining accident which claimed her husband’s life.

Shahn says much about the mining life through the composition of his painting. His focus is on the woman who has just lost her husband. She stands off-center, not crying or hysterical, but with an expression of shock and numbness. This isn’t the first time she’s experienced this kind of pain. The presence of her mother suggests that she has lost a loved one before, presumably her father.

Even the method he uses to paint her, distorted, inproportionate, and unidealized, emphasizes her station in life. She has lived a hard life, and her face shows it.

The red brick wall behind her expresses the anger and torment she’s feeling. It has to, because she must remain stoic for both her child and the world at large. She can’t rage at the mining company, and she must not let her child see fear, so Shahn gives this wall the most brilliant, angry color he can muster to express what she’s feeling.

The wall is also a divider, separating the wives’ miserable, lonely existence from that of the mining bosses who calmly walk away. Having given her the news, they feel they’ve done all that needs to be done for this woman. Their facelessness emphasizes the fact that these men are interchangeable in the minds of the women, all alike. They rob the women of everything: their husbands, their livelihoods, and their dignity.

The three generations in the room point out the nature of mining work as a family tradition. In fact, the miner’s legacy hangs overhead, the coat still attached to its hook long after its owner is gone. The elder’s husband was probably a miner, the woman’s husband was a miner, and the presence of the child suggests that even the next generation will follow that path, despite the pain and injury all around. Such was often the case with mining. Limited mobility and limited opportunity often forced one generation after the next into the mine, and many families died generation after generation, either in the mine or from the mine, with diseases like black lung.

Shahn makes a bold statement about how much the mining industry cost for those who went down into the mines every day. His characters appear placid, but they speak volumes about the lifestyle endured by not just the miners, but also their families. 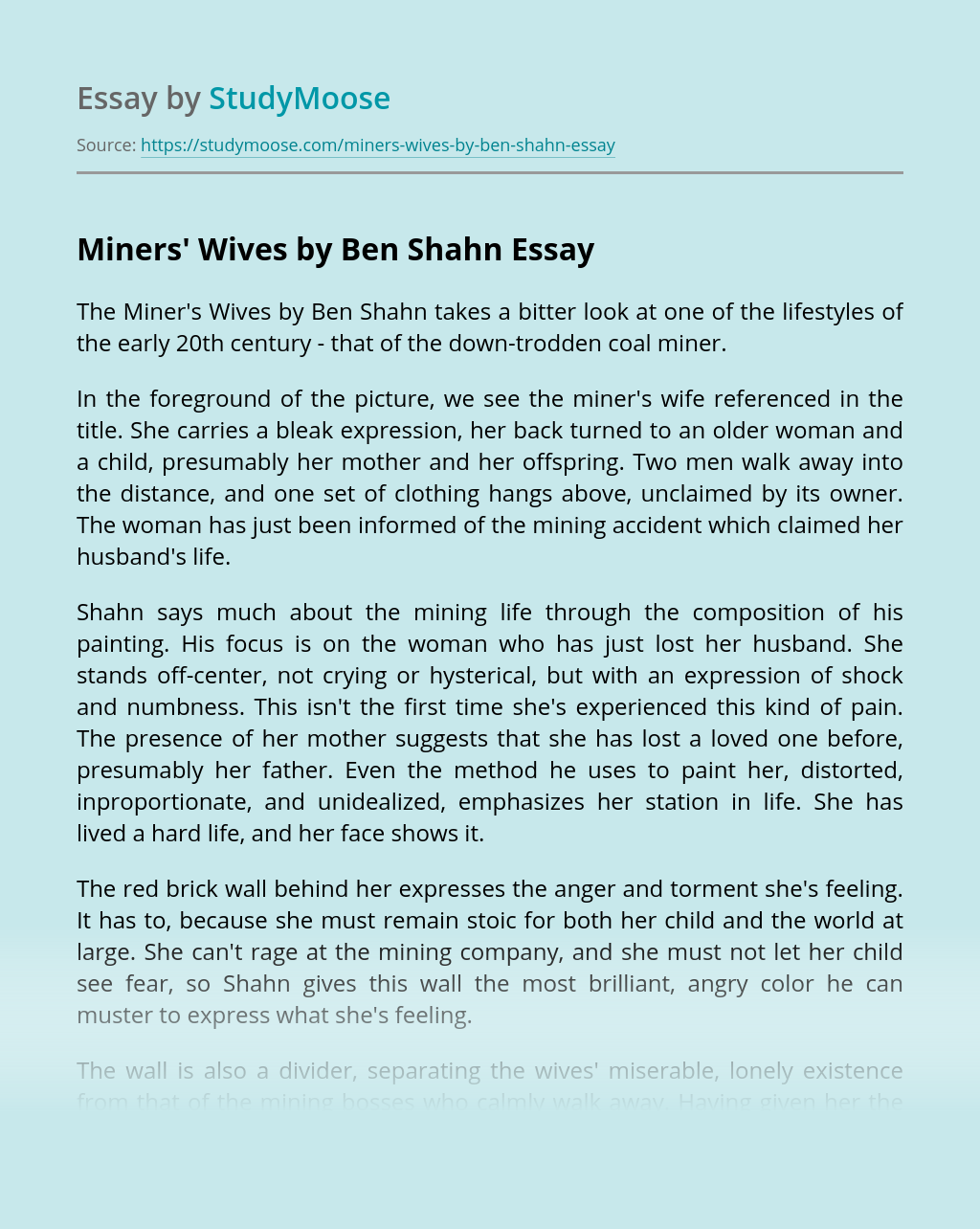 “My Big Fat Greek Wedding” is a romantic comedy that explores cultural differences in a combination of romance and humor. The story revolves around Toula, a thirty-year-old Greek American single woman, who lives with her family in the suburb of Chicago. She works in her family’s business, a restaurant called “Dancing Zorba’s.” Toula is expected...

An inspector calls, drama and tension

Get Essay
Raising a Child

Both Parents Should Assume Equal Responsibility in Raising a Child A child growing up with both parents and a child growing up in single parent house have significant differences. The well being and development of a child, both psychologically and physically, rely vastly on how well each parent performs their roles. Taking care of a...

Symbolism and characterization in “everyday use”

Introduction: A.“Everyday Use” is a poignant narrative that describes the relationship between family members through creative symbolism and fine characterization. B. Through symbolism and characterization, Walker teaches a moral lesson about heritage, identity, and the role of the two in the lives of the characters and audience. C. In order to understand the complicated message...