“Gifted Hands: The Ben Carson Story” is a true story movie that revolves on the life of Benjamin “Ben” Carson who overcome poverty, racism, and a violent temper to become a world-renowned Pediatric Neurosurgeon that gives him a great credit in the field of Medicine. In his early years, he is the dumbest student in their class that made her mother come up on a decision on urging them (Ben and his brother Curtis) to start reading books in the Detroit Public Library because she doesn’t want her children will end up like her.

Before long, Ben moved from the bottom of the class to the top. As he enters the world of Medicine as a Pediatric Neurosurgeon in John Hopkins Hospital, he successfully performed a ground-breaking surgery separating conjoined Siamese twins who were born joined at the head (this complex surgery has never been achieved before without casualties). It was a milestone in neurosurgery, but was far from the only worth mentioning achievement of Carson’s career.

For me, the most noteworthy event in the movie was when his Ben’s mother imparted him, “You can do anything that anyone else can do, only you can do it better.” This excerpt was intended for Ben to be encouraged and to boost his confidence to pursue with his undertakings to be the best he can be. He slowly discovers that his brain is indeed capable of both intelligent and creative thought. It’s a discovery – the miracle of human brain – that completely changes his life and shapes the course of his future.

Learning developed when this excerpt was imparted, for me the gist of the excerpt is there’s nothing impossible if we just think that we can do our best, it just takes courage, self-confidence, self-efficacy and faith in God. Whatever course you decide upon, there is always someone to tell you that you are wrong. There are always difficulties arising which tempt you to believe that your critics are right.

To map out a course of action and follow it to an end requires courage. This is similar to Bandura’s Self-Efficacy Theory. Bandura’s theory emphasizes the role of observational learning, social experience, and reciprocal determinism in the development of personality. According to Bandura, a person’s attitudes, abilities, and cognitive skills comprise what is known as the self-system. This system plays a major role in how we perceive situations and how we behave in response to different situations. Self-efficacy plays an essential part of this self-system. According to Albert Bandura, self-efficacy is “the belief in one’s capabilities to organize and execute the courses of action required to manage prospective situations” (1995, p. 2). In other words, self-efficacy is a person’s belief in his or her ability to succeed in a particular situation. Bandura described these beliefs as determinants of how people think, behave, and feel (1994).

Since Bandura published his seminal 1977 paper, “Self-Efficacy: Toward a Unifying Theory of Behavioral Change,” the subject has become one of the most studied topics in psychology. (http://psychology.about.com/od/theoriesofpersonality/a/self_efficacy.htm). Because in Bandura’s Theory of Self-Efficacy verifies that self-efficacy can have an impact on everything from psychological state to behavior to motivation while people with high self-efficacy – that is, those who believe they can perform well—are more likely to view difficult tasks as something to be mastered rather than something to be avoided. Like in the Bandura’s Theory of Self-Efficacy this reveals that it is how one judges one’s own competence to complete tasks, ability to perform well and reach goals. Self-efficacy affects every area of human endeavour, by determining the beliefs a person holds regarding his or her power to affect situations, thus strongly influencing both the power a person actually has to face challenges and the choices a person is mostly likely to make.

These effects are particularly apparent, and compelling, with regards to behaviors affecting health. It is distinct both from efficacy and from self-esteem, confidence, and self-concept. Understanding how to foster the development of self-efficacy is important for policymakers, educators, and others in leadership positions, and to anyone seeking to build a happier, more productive life. Just like in Ben Carson’s story when he was hesitating on pursuing the operation between the Siamese twins because this surgery wasn’t successfully achieve or accepted before. But with the words of encouragement of his mother, he immediately conducted some research like reading books and applying his stock knowledge. Through these, he successful run the operation on the Rausch twins and that made him carve his name in popularity.

Having watched the movie “Gifted Hands: The Ben Carson Story” I realize that in life we must believe in ourselves. Believe in our strength, capabilities, and have faith in God. Like in the story of Ben Carson after realizing the words of her mother, he slowly discovers that his brain is indeed capable of both intelligent and creative thought. It’s a discovery – the miracle of human brain – that completely changes his life and shapes the course of his future. Furthermore, I learned that we must not put some barriers or limitations immediately on the things we think we can’t do. Don’t belittle yourself and neglect things right away.

Have After watching the movie, I have significantly improved my perception of self-confidence to achieve anything even the impossible. This makes me feel that self-confidence my key to every achievement of goals and even surpassing some difficulties in life. This perception will be a useful tool to me as learner because to be able to succeed in life is to face some up’s and down’s of life with full courage and there will be no courage if self-confidence is missing. As a next step, I need to be open-minded in all possibilities that could happen, even it will be an achievement or misfortune, and ready to face them with courage and faith in God. 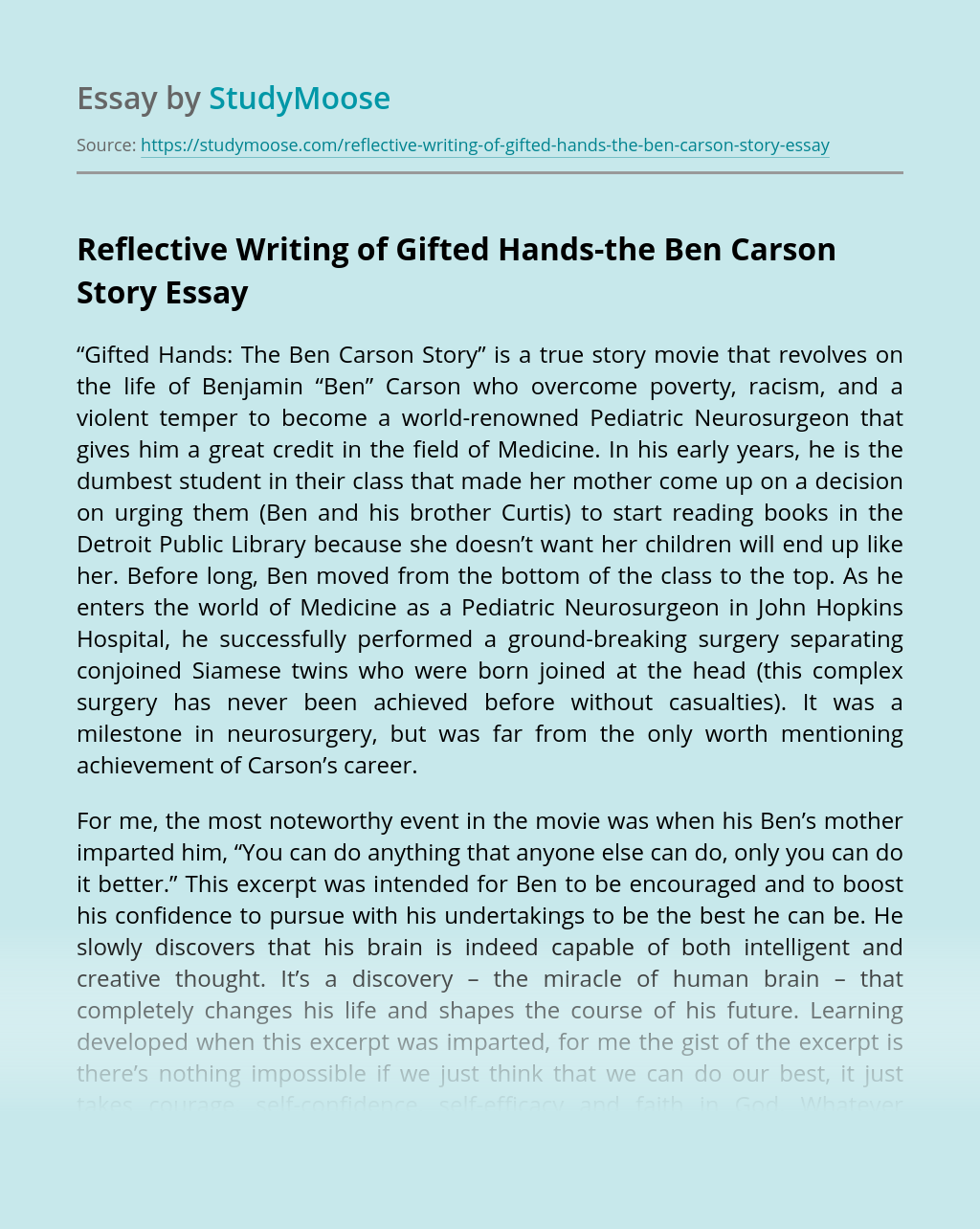