In the novel Touching Spirit Bear by Ben Mikaelsen he discuses the idea of morals. As the reader reads the novel it is filled with many important lessons from many perspectives. Understanding that all these lessons made Cole a better person. The most important lessons learnt from the book are life is what you make it, forgiveness, and that people can change. The lesson “life is what you make it” was a big part of the novel. But also this lesson was reflective.

When Edwin asked Cole to go to the freezing pond, he gave him a stick and says that the right end of the stick represented happiness while the left end represented anger. Cole broke the anger side of the stick, until he recognized that everytime he broke off the angry side it appeared again. Edwin teaches Cole that anger could not be completely destroyed. “Yes, was a big deal. It was a party. It was a feast. It was a sharing and a celebration.

All of life is a hot dog.

Make of it what you will. I suggest you make your time here on the island a celebration. ” (Pg. 166) The hotdog also represented that life is what you make it. Cole made his hotdog just a plain hotdog. While Garvey on the other hand made his hotdog with great care. Garvey’s hotdog was a celebration because that’s is what he intended it to be. Cole made his hotdog just a plain hotdog and it did just that. The sky also symbolizes this lesson. Cole had the decision to look at the clouds or the sun. If Cole had looked at the clouds he would think the weather would be cloudy.

If Cole had looked at the sun it would seem as if it was sunny outside. If we were to look at life as a horrible and dreadful place that’s how life is going to be, because that is how we made it. If looking at life as a joyful, beautiful place that’s how life is going to be lived. It will be lived like a celebration! Celebrating every moment of life and living everyday to the fullest. Throughout the novel, Cole is challenged to forgive and to earn forgiveness. Cole had to be willing to forgive himself and those who had hurt him.

A lot of forgiving had to be done before Cole could fully heal. First, he was to forgive himself. “You’ll dance that dance when you’re ready. ” (Pg. 184) Garvey said to Cole associating to the dance of anger. For most of the novel Cole was full of so much anger, but by dancing the dance of anger, he let go of some of his emotions and forgiving those who had hurt him. After Cole’s infusion of rage of anger Cole was not as angry as before, he will always know that anger was inside of him but he had the choices to let go and forgive those who had hurt him.

He was then ready to move on. Cole could not fully move on without Peter’s forgiveness. Next, Cole needed to help Peter. Cole was truly sorry for what he had done but needed to prove that to Peter and his family. He needed to show Peter that he trusted him, and he wanted to see if Peter could trust him. So before he started his healing, Cole asked to bring Peter to the island to give him a new start. He wanted Peter to get the second chance at life just like Cole had gotten a second chance in the circle justice.

This lesson is very important to the book. It teaches that forgiveness is the start to moving on. It shows us that Cole got a second chance by forgiving and receiving forgiveness. Cole experiences extreme anger throughout the novel. He was even known and portrayed as a very angry person. As Cole gets to understand the idea of forgiveness and the beauty of life he changed to become a better and a peaceful person. There are no bad people in the world just people who make bad choices.

Cole made several mistakes in his life but has learnt from them and is going through taking dips in the freezing pond, rolling the ancestor rock to get rid of his anger so he would not make the mistakes of anger taking over him again. The Cole first sent to the island was feeling consumed by anger, bitterness, and the feeling to unwillingness to change. While the Cole at the end on the novel is a normal boy that is trying control his anger problems and trying to earn forgiveness from others. After Cole had changed he seemed to think that the island could change anyone.

Cole thinks to himself that he has really changed. “He felt like a new and a different person. ” (Pg. 198) That’s why he wanted to bring Peter, the boy who had tried to commit suicide twice after Cole had beaten him up to the island to see if he can change on the island and have another chance at life, like Cole had received. At the end, both Peter and Cole changed spiritually and mentally. The lesson “People can change” is an important lesson from the book because even Cole the juvenile delinquent had changed into a normal teenage boy controlling his anger.

The most important lesson that Cole learnt was that life is what we make it, to forgive and to earn forgiveness, and that anyone can change. Cole always had the options to live life happily but he never knew how to start. But as he learned from the lessons taught to him by many perspectives, he now knows how to start living life without the anger taking over him, he knows how to control his anger. Cole is now more knowledgeable looking at the right end of the stick, centering his life on the sun not the clouds, and making his life a celebration. 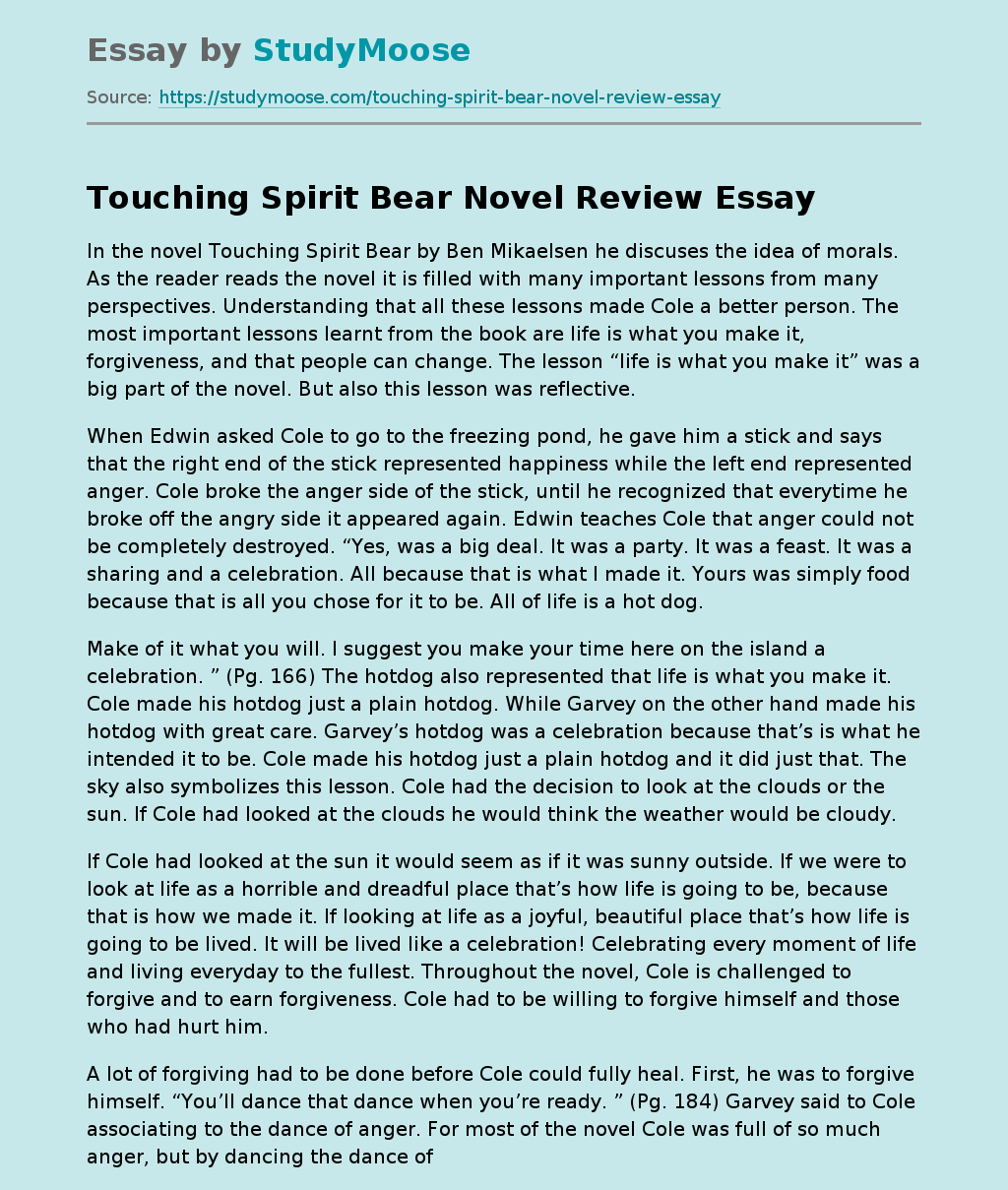