Men and Women (Comparison and Contrast)

Many people argue that men and women are very different. This assertion most probably stemmed from the fact that men and women were traditionally expected to carry out distinct roles. Men were supposed to be the protector and provider of the family. Women, on the other hand, should serve as the nurturer and caretaker of the home. Critics point out that the complexities of modern times have not erased these conventional roles. Many women today remain marginalized as a result. While men can focus exclusively on building their careers, women are expected to balance a fulltime job and raising a family.

Don't use plagiarized sources. Get your custom essay on
“ Men and Women (Comparison and Contrast) ”
Get custom paper
NEW! smart matching with writer

In addition, men still enjoy better employment and compensation than women. Although they are saddled with the dual responsibilities of providing for and taking care of their families, women have to make do with fewer job opportunities and lesser wages. It is true that an increasing number of women are currently working outside of the home. According to Blades and Finkbeiner (2006), women now constitute 46% of the entire paid labor force of the United States.

In addition, the country’s two-parent families are now spending 16% more time at work than in 1979.

This figure translates to an additional 500 hours every year (Blades and Finkbeiner 251). But the sad reality is that American women, particularly mothers, are working hard for less money than men. There is actually a larger wage gap between mothers and non-mothers than that between non-mothers and men. A study revealed that non-mothers with an average age of 30 made 90 cents to a man’s dollar.

Married mothers, meanwhile, made only 73 cents to the dollar. Single mothers fared much worse – they made only 55 to 56 cents to a man’s dollar (Blades and Finkbeiner 252).

Indeed, many employers prefer men over single women and or mothers primarily because they believe that male employees can work longer hours and bring more profit to the company in the process. Women, in sharp contrast, often do not work beyond their shift because they have to go home right away and attend to their families. They likewise take paid maternity leave and or miss work in order to take care of important family concerns. Several employers, therefore, end up viewing them as liabilities to the enterprise. Such a mindset is not without detrimental effects to single mothers.

Given the meager pay that they receive, some single mothers might realize that their expenditures (lunches, transportation, office wardrobe, child care) may be bigger than what they earn. As a result, they might end up leaving their jobs and relying on welfare instead. This outcome, in turn, perpetuates the conventional belief that women should be confined to the matters of the home and the family. But the women who enjoy stable, well-paying jobs should not be so euphoric. Siegel (2004) says that they are the new version of the “trophy wife” (Siegel 364).

She argued that men’s preferences in a bride have shifted from age and physical beauty to educational attainment and employment status. This is mainly due to economic reasons – today’s dismal economy requires both the husband and the wife to work just to make ends meet. The aforementioned preference for high-earning brides would certainly intensify in the shadow of the recession (Siegel 366). Moreover, some husbands consider the high-earning wife as a security blanket. The prospect of a female breadwinner is very appealing to several men because it is synonymous to freedom from traditional marital roles.

In the event that they lose their jobs, their high-earning wives would be more than willing to shoulder their share of the responsibility of providing for the family (Siegel 367). Such a marital setup perpetuates the traditional belief that women alone should balance work and family responsibilities. Siegel, however, notes that most men would prefer “trophy wives” only in their first marriages. When it comes to second wives, many men still prefer women who are less accomplished than they are (Siegel 367).

A possible explanation for this choice is that as men grow older, the prospect of losing their jobs through retirement diminishes their self-esteem. Thus, they choose less accomplished women as second wives in order to prove to themselves that they are still capable of providing for their families. Indeed, both in work and in marriage, women are always confronted with the notion that their faculties are best left in the home and in the family. Single women must think again if they believe that they are spared from the above-mentioned problems hounding married women.

Although girls today have parents who encourage them to participate in team sports and tell them that education and career are important, they still encounter the societal message that their accomplishments are nothing if they do not have a partner. Men, in sharp contrast, are recognized for their achievements regardless of their civil status. Moreover, society pushes them to become “playboys” by engaging in multiple affairs before marriage. Sullivan (n. d. ) is a gay man who considers marriage as a means for homosexuals to attain greater visibility in society.

In marrying their partners, homosexuals are able to prove to society that same-sex relationships are not “unnatural,” “weird” and or “immoral. ” They no longer have to hide their sexual preference and or relationships from their family, friends, co-workers, etc. In a way, they will enjoy a dignity that emanates from being a full and equal part of the human race (Sullivan 408). But marriage does not have the same effects on women. It is true that marriage gives women an identity, but this distinctiveness is often patterned after those of their husbands.

In casual conversations, married women are usually identified as the wives of their husbands. Single women, therefore, are left stuck between a rock and a hard place – it is either they remain unmarried but be considered as “inferior” or get married and assume an identity that is patterned after their husbands. Meeting the demands of modern society requires men and women alike to act in ways that do not conform to the traditional concepts of masculinity and femininity. Work structures and public policies must therefore be adjusted to recognize this inevitable reality.

Both mothers and fathers must be given paid maternity or paternity leave, as well as the ability to structure their work hours and careers in such a way that they are able to meet both business and family needs. Realistic and fair wages is likewise a must, especially for single mothers. When these changes are implemented, today’s children will inherit a world wherein people enjoy a high quality of life because of their abilities and not because they happened to be a man or a woman. Works Cited Blades, Joan, and Kristin Rowe-Finkbeiner.

Men and Women (Comparison and Contrast). (2016, Sep 17). Retrieved from http://studymoose.com/men-and-women-comparison-and-contrast-essay 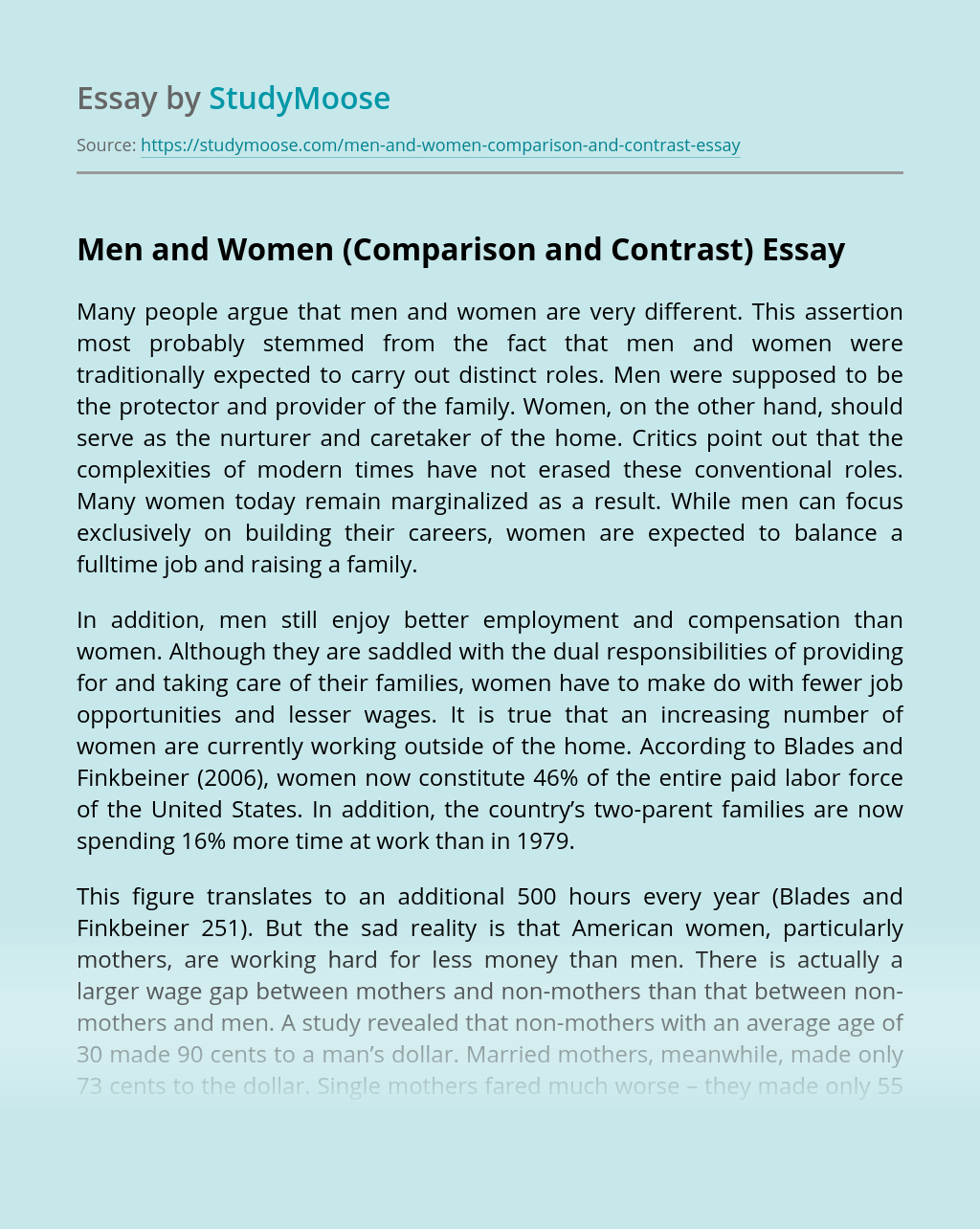