Maturation and Humbleness In "A&P" by John Updike

In the short story “A&P” by John Updike, Updike develops a theme of maturation and humbleness. The story is a growth and development story where the main character, Sammy makes the foolish decision to do something he has presumed is an adult thing to do. Woefully, what Sammy thinks is a chivalrous act goes unremarked by the Queenie and her friends, and is ultimately left to handle the result of his juvenile actions. In the story A&P, Updike depicts Sammy as having an internal struggle between freedom, morality, and freedom and is also a miserable young man whose immature behavior stems from his sexist views, contempt personality, and judgmental attitude.

Don't use plagiarized sources. Get your custom essay on
“ Maturation and Humbleness In “A&P” by John Updike ”
Get custom paper
NEW! smart matching with writer

Sammy’s character is depicted as a disrespectful youth who doesn’t have regards to other people; he seems to be in a world of his own. First of all, he is abusive in words to the customers, referring to them as “sheep” (228) in the way that they essentially mean nothing to them and they blindly and mindlessly follow each other up and down the aisles with their shopping carts.

Sammy is exclusively rude to an older lady who he calls the “witch” (227). This old woman is dreary and unattractive to Sammy, contrary to Queenie. As Sammy is a cashier, I believe he should refrain from insulting people in his mind and focus on committing his full attention to the customers and only worry about keeping them satisfied. Sammy’s disrespectful and extraneous behavior isn’t limited to the customers, but extends to his co-worker, Stokesie.

He looks down on Stokesie in his thoughts: “He thinks he’s going to be manger some sunny day” (229). Sammy seems to be deranged in thinking he is a more elite person than everyone else, when in reality, he is more like everyone than he is different. His mindset is flawed and it’s in dire need of being fixed.

Although Sammy is painted as judgmental towards his customers because he seems to be disgusted by the girls attire and how they are carrying themselves as soon as they walk into the store, he has an eye for Queenie, whom he expresses the beauty of her bating suit with compliments: ” I mean, it was more than pretty” (228). At this very moment, he defies all else to please Queenie, even if it means losing his job. As a result, when Lengel, the store manager shames the girls for how they are dressed, Sammy found his time to shine by standing up for the girls, Queenie exclusively. “You didn’t have to embarrass them” (232). Without a doubt, Sammy’s goal was to gain Queenie’s attention as a man who would stand ip to his boss for her. However, this random outburst shows that he only thinks of the present and acts based on emotions and does not fear the future and think rationally. His outlook on life is much too simple and he thinks he was right in trying to protect the girls from Lengel’s ponderous words. It is clear that Sammy needs to fertilize a life experience to look at all angles of things before making spontaneous decisions.

Sammy’s unfortunate lack of maturity caused him immense ramifications, which led him into a life of thorns. As a result of his pride for the girls and not thinking about things through properly, Sammy was willing to argue with his boss and quit his job in hopes that Queenie would see that he is a man who stands up for women. His false gesture of assuming that the girls need an unsuspecting hero to save them at some point further proves his immaturity. In addition to him losing his job, Sammy would have to deal with his parents being disappointed in him for making such a childish mistake. Even after he begins to rethink his decision he still puts his pride ahead of his own career: “once you begin a gesture it’s fatal not to go through with it” (232). Sammy clearly has much to learn about heroism, chivalry, and women.

Sammy proves to the readers that his is blatantly immature in his attitudes and action throughout this story. He makes poor judgments on people he doesn’t know, only based off of what his initial impression is and displays an unwieldly amount of disrespect towards his elders. He should have thought deeply about his erratic action of showing off in front of the girls and quitting his job because he felt they were being “disrespected” before pushing himself into the position and then saying “I felt how hard the world was going to be to me hereafter” (233). This exorbitant lesson will definitely help him become more cultivated about his approach on life. Sammy’s adolescent, disrespectful, and judgmental behavior in Updike’s “A&P” not only made him a failure, but also forced him to pay the penalty after abandoning his job. With this pricy lesson, one can only hope that he will learn from his mistakes and not repeat them in the future.

Maturation and Humbleness In "A&P" by John Updike. (2019, Dec 04). Retrieved from https://studymoose.com/maturation-and-humbleness-in-ap-by-john-updike-essay 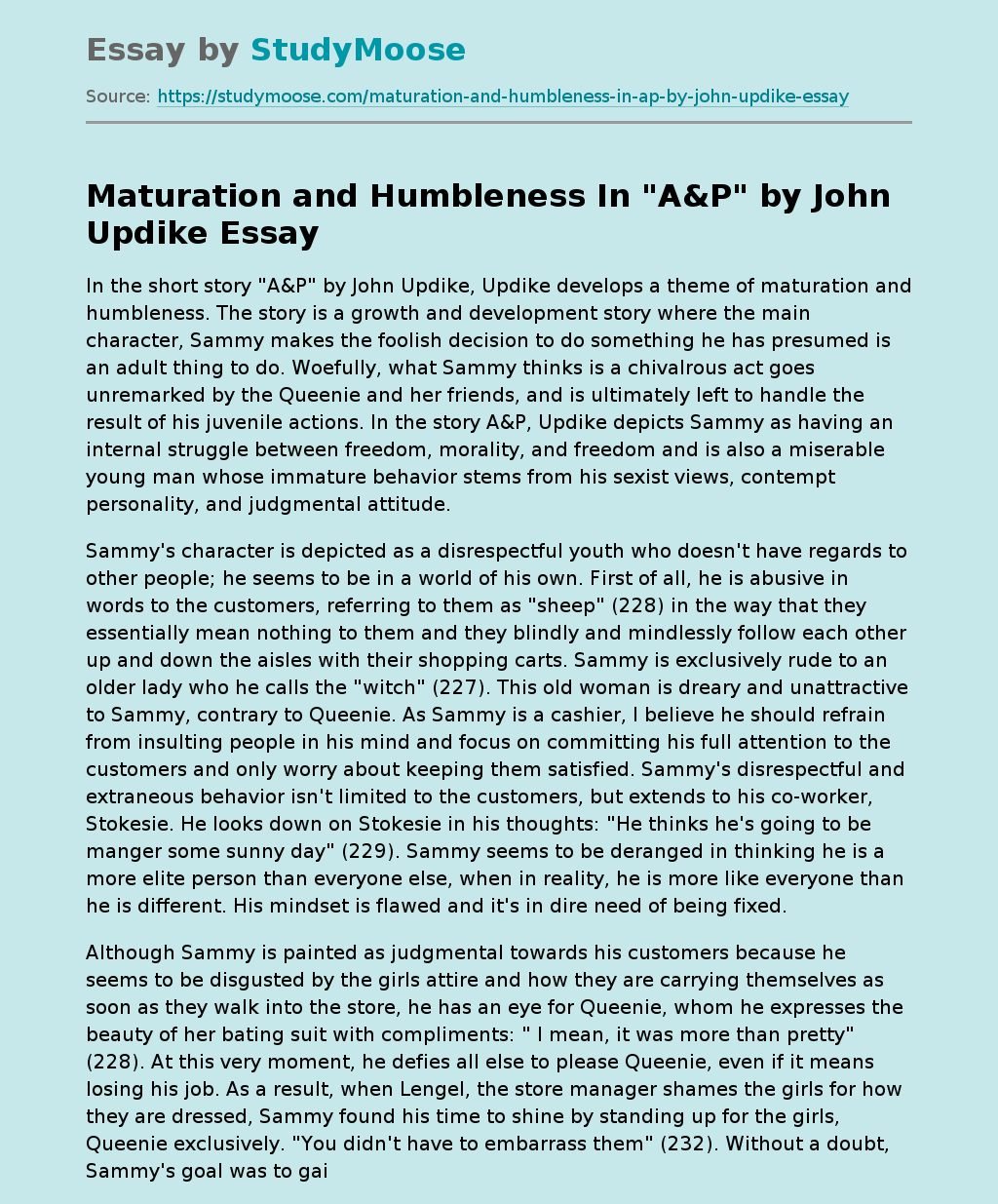