Will Hunting, played by Matt Damon, in the movie “Good Will Hunting” is the epitome of a psychological paradigm. He can be analyzed in so many ways, touching on many of the different fields of psychology. The most interesting thing about Will is the cognitive dissonance he goes through throughout the film. He is torn between these two cognitions, both of which contradict each other. One of these cognitions is the fact that he is an orphan from South Boston, meaning he should only have a low pay job and live there for the rest of his life.

Don't use plagiarized sources. Get your custom essay on
“ “Good Will Hunting”: Cognitive Dissonance ”
Get custom paper
NEW! smart matching with writer

It would be wrong of him to forget about his roots and try to become something of himself, which would be unfair to his friends who aren’t as blessed as Will. On the other hand, he is a profoundly smart individually; to such a degree that Prof. Gerald Lambeau compares him to Einstein. He knows he has potential to get out of South Boston and possibly do many great things with his superior intelligence, but he makes himself believe he doesn’t want to because of this other cognition.

This cognitive dissonance he bares is the one main thing that keeps him from making a concrete decision of moving on to be something better.

His Componential intelligence is obviously much higher than others, which is seen when he works these complex math equations with such ease. His lack of Contextual intelligence is made very clear by Sean Maguire, his psychologist, played by Robin Williams. In one particular scene, Sean breaks down Will by stating that every response Will has to anything comes from a book.

None of his responses come from real world experiences and therefore he has no real knowledge of the things you just can’t learn from books, such as love. One example is when Will speaks about Sean’s wife, he obviously had no knowledge of the pain or suffering Sean went through, but acted as if he did because he analyzed a painting Sean did. He is also lacking emotional intelligence substantially, which is shown regularly throughout the film. The scarcity of this part of his intelligence is possibly due to the fact he was beaten numerous of times as a child. This caused his intelligence to possibly becoming immature in some parts and highly established in others. An example of this is evident throughout almost all the scenes with his somewhat girlfriend Skylar, played by Minnie Driver. He doesn’t quite know how to deal with relationships, mainly because he is lacking in this part of his intelligence, especially those relationships with the opposite sex.

Through numerous of sessions with Sean and the aide of Skylar and his friend Chuckie, Will begins to confront this Cognitive dissonance. Not only does he realize that he indeed has a gift that needs to be utilized, but he also confronts this emotional intelligence deficiency by maturing it a bit and realizing that it’s not always bad to let someone inside and discover who you really are. By the end of the story Will has matured vastly in all aspects of Cognition. His emotional intelligence has increased greatly along with his Contextual intelligence. He also has found some Cognitive Consistency, which is what many people long for, especially those with extreme cognitive dissonance such as Will did. 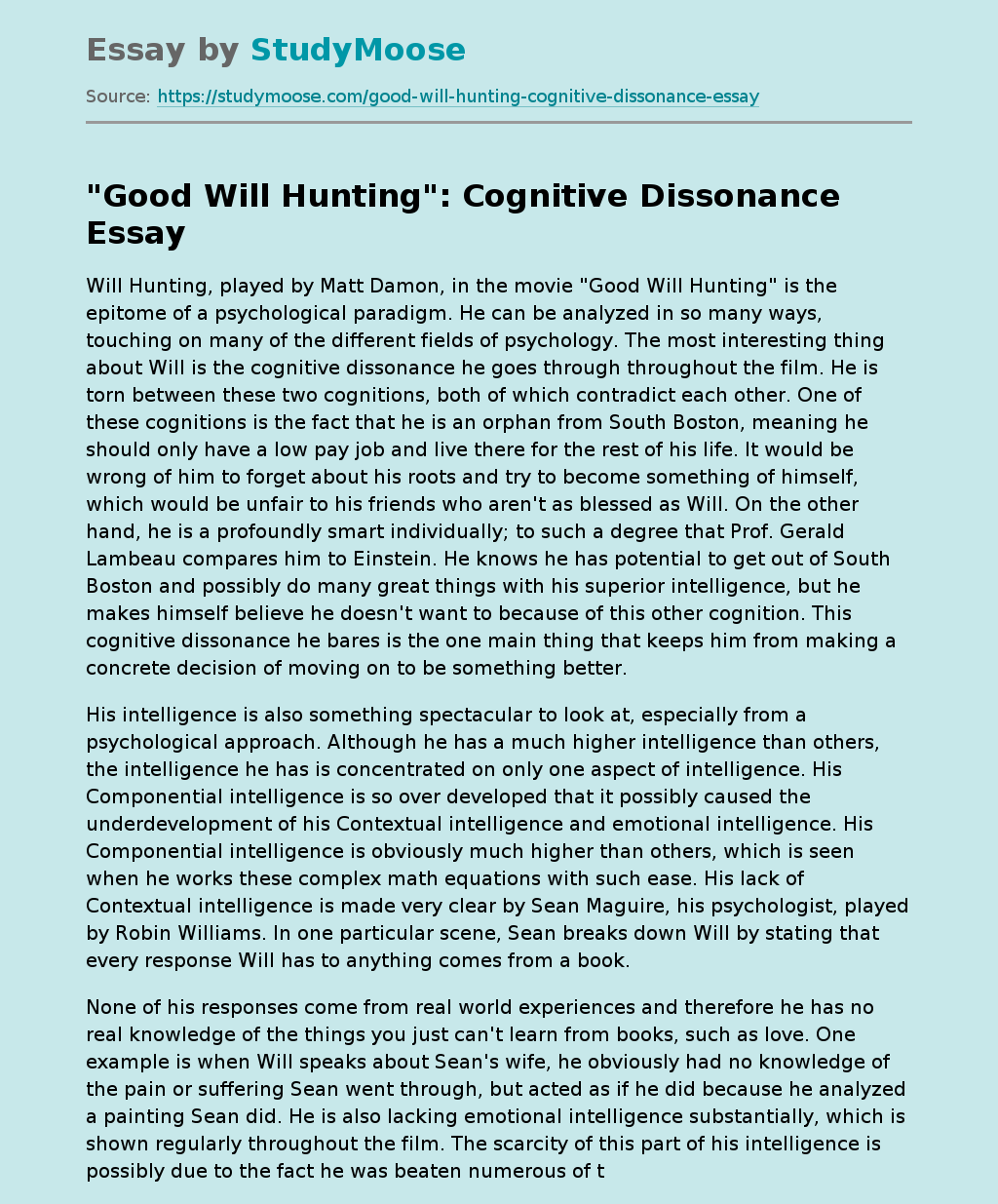