Gwen Harwood’s, ‘Father and child’, is a two-part poem that tempers a child’s naivety to her matured, grown up attitude. Barn Owl presents a threshold in which the responder is able to witness the initiation of Gwen’s transition. The transformation is achieved through her didactical quest for wisdom, lead by her childhood naivety and is complimented through ‘nightfall’, where we see her fully maturate state. The importance of familial relationship and parental guidance is explored in father and child, as well as the contrasting views on mortality and death.

Don't use plagiarized sources. Get your custom essay on
“ Barn Owl ”
Get custom paper
NEW! smart matching with writer

Barn Owl depicts death as a shocking and violent occurrence while the second poem, nightfall, displays that death can be accepted, describing the cyclical and ephemeral nature of life. Relationships, especially with Gwen’s parents, act as a catalyst for her maturation and leave behind sustaining memories as shown in many of her poems. In Barn Owl, Gwen initially represents her father as being “robbed of power” and an “Old No-Sayer”.

The neologism, “No-Sayer”, incites a thought within the readers mind, rendering an image of a child through the simplistic syntax, representing a childlike view of the world.

The combination of the two quotes separates the child and father, showing that the child disregards her father’s authority, ultimately expressing her view of their connection. However, in progression with the poem, we realise that the father plays a major role in the guidance of Gwen’s childhood. This idea is represented when considering Gwen’s fathers presence after she had injured the owl.

“my father reached my side, gave me the fallen gun”.

The positional verb “side” emphasizes the truthful relationship between father and daughter, as he is providing solace and support for Gwen, in this time of realisation, death and accountability, in contrast to the image set by “old No-Sayer”. The significance of Gwen’s parents to her maturation is again reinforced when considering the dialogue, “End what you have begun”. It is an imperative command which refers to the process of her childhood development and carries with it the idea that maturation is inevitable and must occur as a part of life.

Nightfall indicates similarity in terms of the significance of parental guidance. For example, when Gwen states that her father keeps “ a child’s delight forever, in birds…” we notice that Gwen has a sustaining memory of an integral part of her life due to her father, the owl shot in Barn owl. A more literal example of the importance of parental guidance Gwen preaches is revealed in Gwen’s confession, “once quick to mischief, grown to learn what sorrows…no words, no tears can mend. ” This reveals the effect her father has had on her.

She has matured, become an adult and has become understanding of the ephemeral nature of life a key concept evident in many of Hardwoods poetry and affirms the importance of Gwen’s parents to her development of a child to an adult. In many of her poems, Gwen adumbrates to a certain extent, as to not fully reveal what is brewing, in order to allow the reader to consider for themselves and make judgments on the situations presented. In father and child, the foreshadowing leads to integral moments of Gwen’s life and communicates with the reader.

Barn owl initiates with the symbolic compound word “Daybreak”, foreshadowing possibilities of experience and awakening. This notion of possibility changes to a sense of actuality when Stanza 3 (versus 2-5) not only adds dramatic suspense to the story but prefigures the momentous event that changed the child’s life, the killing of the owl and corresponding realization of death. For example, the metaphor “master of life and death” sets a grave tone and places tension and apprehension in the readers mind as we are evoked to contemplate what dangerous deeds will be committed.

The synecdoche, “punish beak and claw,” represents the fact that the child can only see and focus on parts of the owl, symbolically denotes that the child is blind to the enormity of what she is about to do. The responder is hinted further, by this synecdoche, on what the persona is about to shoot This is a reflection of the child’s naivety and allows the reader to understand the impelling force urging her to steal her “father’s gun”, and to take this quest for wisdom, inherent childhood arrogance. Similarly in nightfall, Gwen prefigures a monumental moment of her life, the death of her father.

The title of the poem “nightfall”, is the binary opposite to “Daybreak” and therefore assembles a thought in the readers mind of the opposite of coming alive, end of time, death. Gwen’s understanding of the inevitability of death is highlighted when she says “Now the season that seemed incredible is come”. This quote in combination with the constant links to nature, in particular “fruits” is symbolic of the season autumn, the falling of ripe fruit and can therefore be interpreted as the end of her father’s time on earth, Gwen’s poem, Father and child, represents the cyclical nature of life through the inevitability of consequence and growth.

Paternal guidance and familial relationship is seen as a key catalyst to her maturation and increasing understanding and responsibility, reverberated in many of Gwen’s poems. The foreshadowing of significant events assists the responder in connecting with the poem. For example in Barn Owl, we come to understand that it was Gwen’s child naivety that led to her stealing her father’s gun and taking the life changing quest for wisdom. 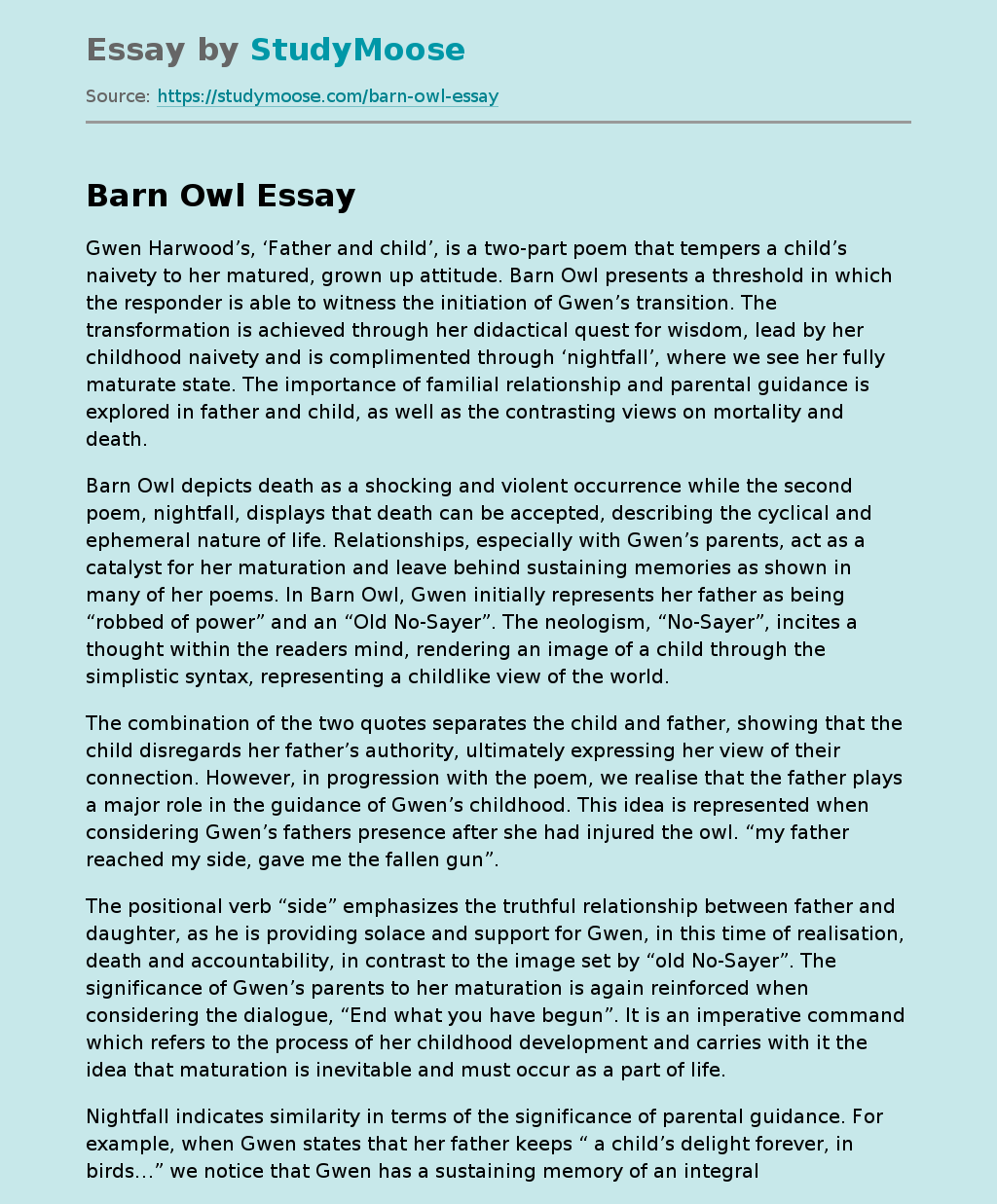