Batas Militar. Commonly known in its English translation as “Martial Law”. As stated in the 1973 Constitution of the Philippine Republic that the Prime Minister as the Commander-in-Chief may declare Martial Law under the same conditions, “in case of invasion, insurrection or rebellion, or imminent danger thereof, the public safety requires it.

The President however, using this provision may corrupt the Military forces and become hostage of ambitious Generals who may want to exercise power through a puppet President, without corresponding responsibility.

Don't use plagiarized sources.
Get Your Custom Essay on Martial Law Just from $13,9/Page

This provision as written in the Article VII, Section 10, Paragraph 2 placed the entire Republic of the Philippines as defined in Article I, Section 1 of the Constitution of the Republic during the Marcos Regime is the root of the Proclamation 1018 that has been executed on September 21, 1972 and remained in force until January 17, 1981.

This proclamation also suspended the Writ of Habeas Corpus, this suspends the human rights of an accused person to be fight for what he believe is right in front of an authority, but instead his fate depends upon the attitude of the President towards him.

On the first days of this proclamation, I believe the country responded well, because they also believe that the Philippines is sick, rebellion against the government has been in power in some rural places and communist armed forces are trying to invade the nation.

But I also believed that the authority who is Ferdinand Marcos during that time exceeded to his limitations as the head of state. During the Martial law, Marcos amended the constitution for several times and I believe he used this for his own good. Democracy has been ceased and no news opposing the Marcos administration can be seen in broadsheet and even in the broadcast media such as radio and television, they also put into closure those media stations that attack the wrong doings and failures of the Marcos administration.

They put into prison those people whose only objective is to say what they think is right and what they think is best for the nation. Democracy and human rights has been violated during this time, not to mention the allegations of corruption and violation of its own constitution has been brought to the face of President Marcos. The most influential person to be put into prison is Sen. Benigno “ninoy” Aquino. He’s against the Marcos regime and its corrupt performance.

He’s death is the eye opener of the Filipino people who is frightened and afraid to speak out against the Marcos administration, but before that, after he was put into prison, he was exiled to the United States of America, and because of love of country and people and also, maybe, because of his desire to be the next president of the Republic he returned back to his homeland and face the consequences, he was assassinated at the tarmac of Manila International Airport and after how many years named after him and was known nowadays as Ninoy Aquino International Airport.

I certainly believed that during the Martial Law era, not to mention the good things that this proclamation brought to us such as discipline, obedience and loyalty to the one who is in power. This proclamation of Martial law has been used by the authorities in such a way that the citizens of this nation will hate them, violating their own constitution, corrupting the money of the people, corrupting the rights of the citizens, corrupting the minds of the military whose prime objective is to defend the nation and not to hurt it citizens.

Martial law brought back the love of country and desire to have democracy not dictatorship of the one who is power. Martial law opened the minds of the citizens to move, to join, to fight, and to love freedom. Human Rights should not be sacrificed just to obtain a common goal. In order for us to move forward, we should set our goals and vision with due respect to the rights of the citizens and respect to our own constitution. 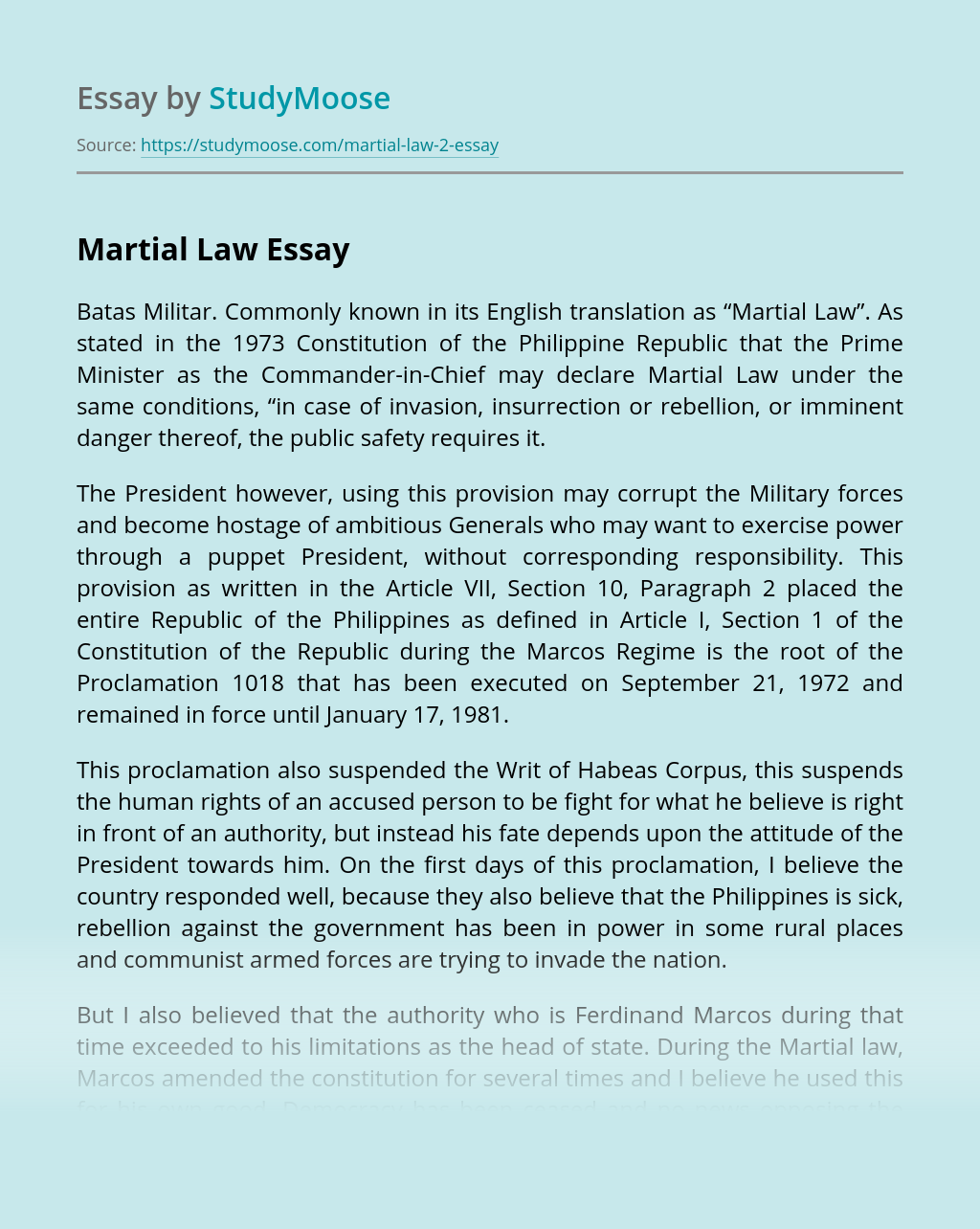